Disneyland's "A Walk in Walt's Footsteps" tour intends to tell and show guests some of the stories behind the magic of the world’s original theme park: Disneyland. Walking away after a stroll with Uncle Walt, the biggest impression that's left is one of awe. Walt Disney the man, removed from his legendary status, was a thoughtful, intelligent master of his domain. His domain was entertaining, and he did it with skill. Utilizing audio clips from Walt himself, the tour lets you travel back to the late '50s and early '60s, back when the company was still trying to sell its crazy idea of a themed amusement park built amongst the orange groves.

Compared to contemporary times, the Disney company was exceedingly open about its motives, strategies and behind-the-scenes goings-on. That said, one tidbit mentioned on the tour was that the talking macaw overlooking the entrance to the Enchanted Tiki Room was thought by many guests (including our guide’s grandmother) for many years to be real—trained, but real. So Walt didn't reveal all of his secrets. 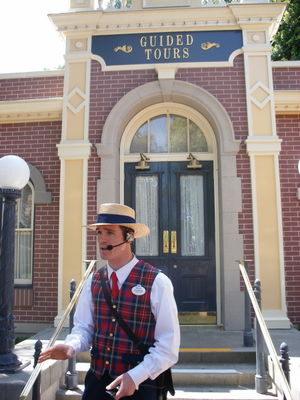 A Walk In Walt's Footsteps tour uses audio clips of Walt Disney to help bring the early days of Disneyland to life. Photo by Annemarie Moody.

The tour is held daily at 9:30 a.m. and 2 p.m., with a picnic lunch at the conclusion. The sandwiches offered are premade and in a plastic box, but with choices of tuna salad, turkey, ham, or vegetarian (with chips or fruit, chocolate chip cookies, and water or soda), it’s a satisfying meal. Before the meal, though, you wander through what I think of as the “original” lands of the park: Main Street U.S.A., Adventureland, Frontierland, and Fantasyland. Our tour guide, a five-year veteran named Stephen of Glendale, Arizona, said the tour could easily include the other lands—but then would take that much longer. At three and a half hours, Walk in Walt’s Footsteps is probably maxing out the time commitment of guests, so the missing lands aren’t missed too terribly much. And at $59 per guest (no child discount but a 20 percent discount for Premium and Deluxe Annual Passholders, AAA members, and Disney Visa members), you should at the very least be a fan of both the company and the parks, as the tour delves into details and history that the casual amusement park fan might not enjoy. 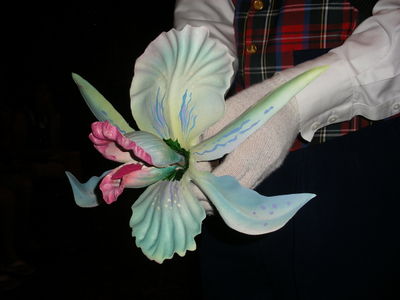 Arrive 5 to 10 minutes early to place your lunch order and get situated with the audio equipment (a short-wave radio with headphones). Our tour started off in front of City Hall on Main Street, moving over toward the Main Street Train Station and the flagpole, then down Main Street over to Adventureland. We watched Walt Disney's Enchanted Tiki Room, then went onto Jungle Cruise (skipping the queue and getting front-of-the-boat seats). You then wander over to Frontierland with stops near the entrance and in front of the Golden Horseshoe Revue, and then over to New Orleans Square with a stop into the lobby of Club 33. Take the Disneyland Railroad over to the Toontown station, with a restroom stop by "it's a small world." 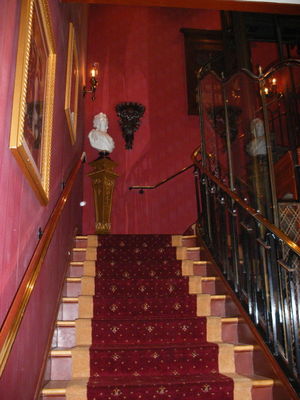 A highlight of the tour is a peek into the lobby of the exclusive Club 33. Photo by Annemarie Moody.

The audio includes themed music, the tour guide's stories, directions, and audio clips of Walt Disney introducing his park on the Disneyland TV show and on opening day in 1955 (we were told the tour management can and probably will change the script at any time, so these details are subject to change).

My personal experience with A Walk in Walt's Footsteps was overall a very positive, informative and enjoyable experience. I have been going to Disneyland on a consistent basis since I was less than 2 years old, so I like to think I know a thing or two about the California park. However, I did learn several things I'd never known before, including the reason you can see the ship's sails above New Orleans Square—I'd never noticed them before my tour and the reason for their placement. Apparently, because the Rivers of America are not indicative of the Gulf waters of Louisiana, the side of New Orleans Square facing the water is supposed to be the land-side, with the idea that just beyond the buildings is the waterfront—hence the sails. 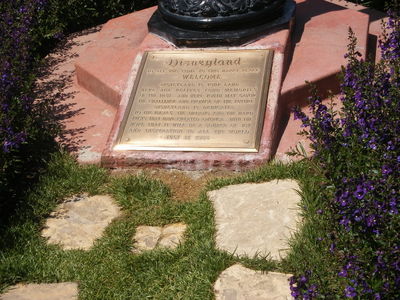 Even the most hardcore Disneyphile could find something new on this tour, like a plaque of Walt's opening day speech at the base of the flagpole on Main Street. Photo by Annemarie Moody.

Don't be shy about calling and checking up on your tour, especially if you're coming from far away or are planning your day around it (and you’re probably doing one or the other or both). One of the problems you can have is misinformation—the cast members on the phone are very nice, but no one seems to have 100 percent correct information. Get to the park, and they'll smooth any issue over. The tour is definitely wheelchair accessible and can be translated into sign language or foreign languages with advance notice to the tour ticketing RSVP line. Be prepared to walk (albeit at a slow pace), stand, and sit on hard benches for three hours. And as with any trip to the parks, comfortable shoes are a must.

Walt's Footsteps is probably best known as the tour in which you can see the lobby of Club 33; the closest most of us mere mortals will ever get to the super-exclusive dining club above New Orleans Square. At least one couple in our group of 12 (15 is the maximum) was spending the money for the tour for that express purpose, but reported afterward that they got far more than they expected. I would wager that even the most hardcore Disneyphile would find something new on this tour. I think is ideal audience for this tour the 15 years old and older crowd. It's fun hearing the stories, but I don't know that kids can really absorb the best stuff any younger than that. 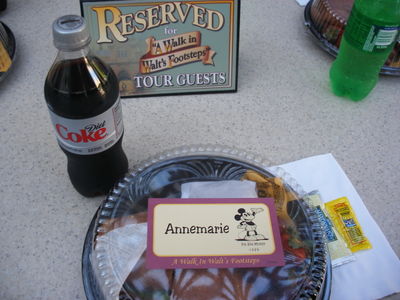 The tour concludes with a picnic lunch inside Tour Guide Gardens. Photo by Annemarie Moody.

With all tours, you're going to get the best experience with a good, inquisitive group and of course, a knowledgeable tour guide. The biggest complaint I would have about this tour, or any others, is that there's really no way to judge the accuracy of the information you're hearing. Stories that seem just plausible enough to be true could be just that, but they could be pure fiction. Either way, the details and myths of the Disney legend get excellent airtime on this tour, appropriately enough. Because the tour could likely change at any time, and you really don't want the details spoiled anyway (right?), I'll leave it to you to decide if it's worth it. For me, it was.

Annemarie is a life-long Disneyland fan, first visiting the California park when she was 18 months old and has been back too many times to count. She lives and works in Pasadena, Calif., currently in marketing, but has worked as a reporter and news editor for several publications including The Arizona Republic and Animation World Network.