Mickey's Not So Scary Halloween Party

It's that time of year again. Mickey's Not So Scary Halloween Party is up and running at Walt Disney World. Pack the gang and head out! 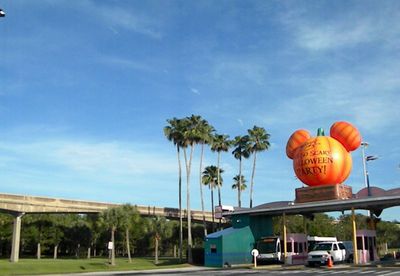 Decorations greet the guests from the time they pull into the park. Photo by J. Jeff Kober.

Actually, the setting for Mickey's Not So Scary Halloween Party begins well before Labor Day. Bunting and signs can be found up and down Main Street U.S.A. and throughout the park, like here at Minnie's House: 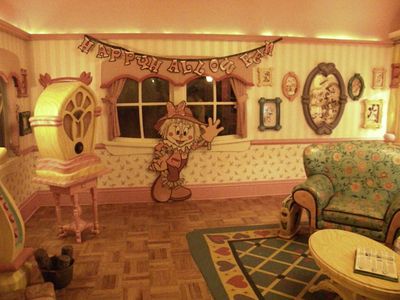 Minnie has decorated her house for the event. Candy can be found on the gazebo out back. Photo by J. Jeff Kober.

And signs throughout property invite you to attend this after-hours event. 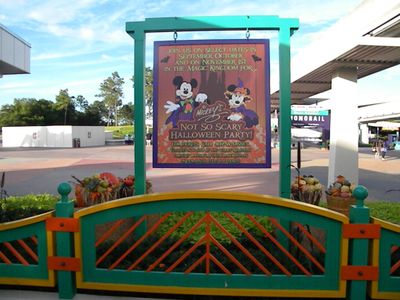 The question is: Do you attend? The answer is, well...it depends. It depends on what kind of Walt Disney World guest you are:

1. If you are an annual passholder, probably not—unless you are the most avid Disney fan.

2. If you are on vacation where you are buying a multiday park hopper—probably not—unless you are the most avid Disney fan.

3. If you live in the greater Orlando area, or less than a day's drive from Disney—definitely so. And I recommend that if you're more than an hour or two away, that you take advantage of the low rates found on property.

4. If you are in town for only a day or so at Disney and you only had time to do one park—definitely so.

Here's the rationale: It really isn't worth the value if you have already invested money into a multiday pass or in an annual passport. There are major offerings at this event you won't see otherwise. But they are not so significant as to warrant the extra expense.

Conversely, if you only go once in a while, or if you are only going to have a limited time to go while in town, this would be your best value. The official starting time is 7 p.m., but you can enter as much as two-and-a-half hours earlier. While there you will enjoy a wonderful parade: 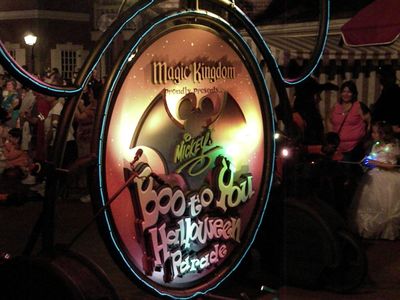 Boo To You parade heads through the Magic Kingdom. Photo by J. Jeff Kober. 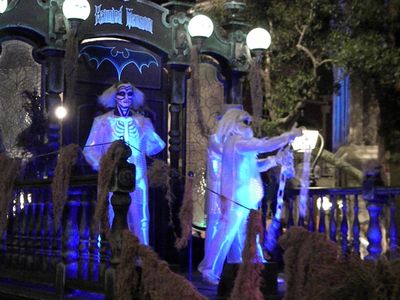 Hitchhiking Ghosts may not follow you home…but they do follow the parade route. Photo by J. Jeff Kober. 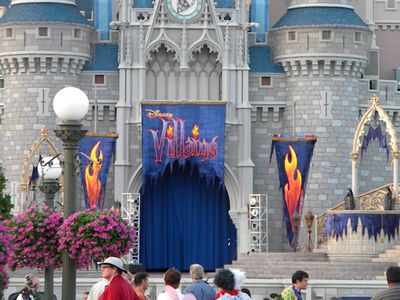 Disney villains have taken over the castle for their own appearance. Photo by J. Jeff Kober.

And a major fireworks display: 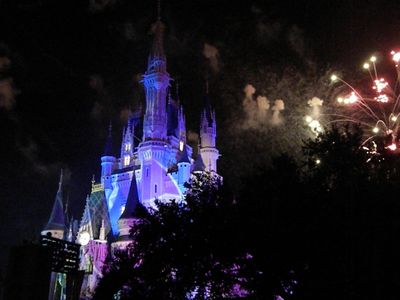 Fireworks are clearly the highlight of the evening. Photo by J. Jeff Kober.

Here's a hint--go to one of the earlier parties they offer. Consider it a kick off to the Halloween season. You'll find the park much emptier than later Halloween party events. That's to your advantage, because it allows you to walk in on many attractions. We rode Big Thunder Mountain Railroad twice without having to get off the train! In fact, having attended the September 18 event, we found many corners of the park fairly quiet at times. 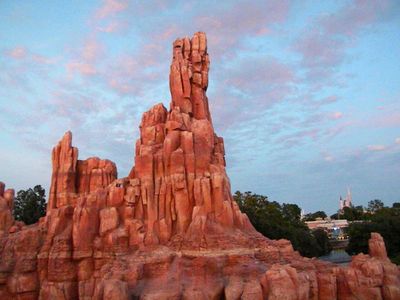 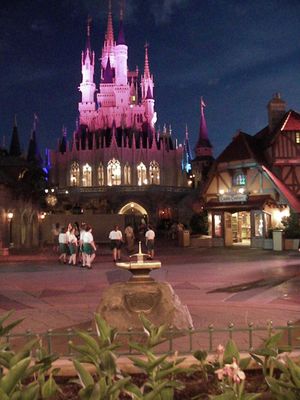 Many corners of the park were void of guests. Still, lots of cast members were on hand. Photo by J. Jeff Kober.

Then of course, there are the many things the park does to plus the event above and beyond what you find on most days. First of all there's the candy. 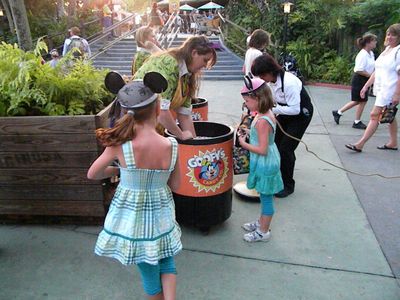 Cast Members work hard to keep people moving through the queue in their efforts to acquire candy. Photo by J. Jeff Kober

You find free bags and places to obtain candy throughout the park. Some locations even include an extra hand out of raisins. Some locations are unique, such as an Alice in Wonderland themed area between ToonTown Fair and Tomorrowland, as well as this one utilizing a former queuing space at Splash Mountain: 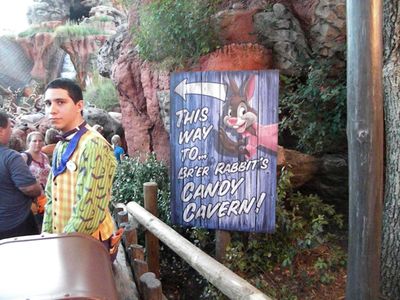 This way to Brer Rabbit's Candy Cavern-One of a few key locations that gives out raisins, as well as candy. Photo by J. Jeff Kober. 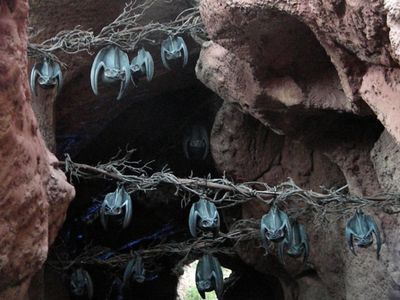 Bats await you on your Splash Mountain journey for candy. Photo by J. Jeff Kober.

As for the candy, it's a good variety of chocolates, with popular favorites, and even some old favorites.

Beyond the candy, there's much more. Throughout the park, there are cast members all around, inviting you to play games. 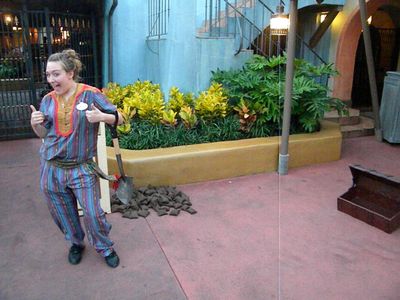 Cast members were on hand throughout the park to play games with the guests. Photo by J. Jeff Kober.

In addition to Disney character appearances, there are locations like this one where you can have a special photo taken. 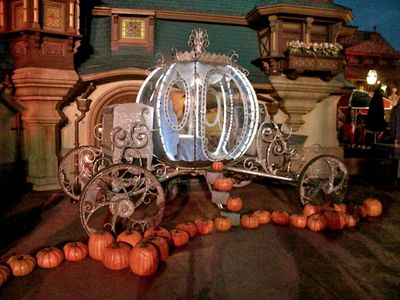 You don't get to sit inside the coach, but you do get to stand in front. Photo by J. Jeff Kober. 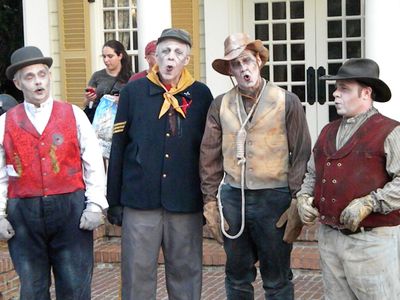 This quartet was "dying" to perform. Photo by J. Jeff Kober.

And there's dance parties going on like this one over at the Diamond Horseshoe. This location also handed out candy, though it wasn't marked on the map. 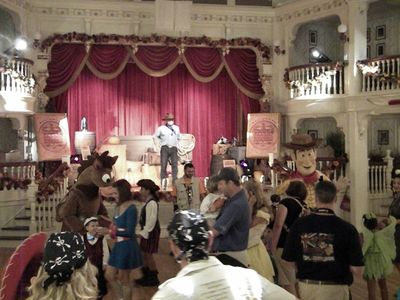 Woody and friends join the party here at the Diamond Horseshoe. Photo by J. Jeff Kober.

So you see, there's plenty to do and see. If you come early and stay late, you'll find this to be one of the best Disney values out there. Of course, you and your party—including your kids—have to stay up late to get that value. I found many a child fading quickly before 10 p.m.

But, if you are an avid Disney fan, you'll have a great time. As one such individual, the highlight was the music playing throughout the park. In Frontierland, you would find tunes like Ballad of Davy Crockett and Swamp Fox playing. I loved the special lighting found throughout the park. 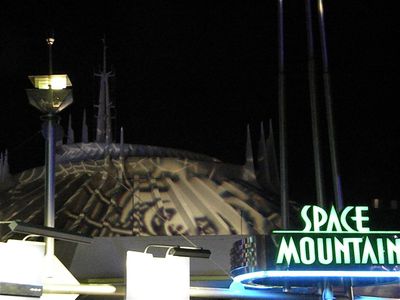 Space Mountain lit up like a cobweb. Photo by J. Jeff Kober.

I found Disney characters you don't see every day, like the Headless Horseman, who makes his way ahead of the parade. 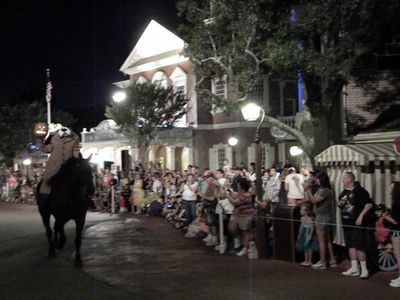 The highlight of the evening for me was the Headless Horseman leading the parade. Photo by J. Jeff Kober.

Even the Cast Members seem to have a great time. 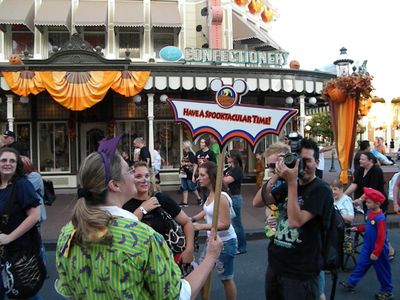 Indeed, I enjoyed the experience immensely.

Therefore I recommend it to anyone who is a Disney fan. If you want terror, head to Universal. But if you want a great Disney experience, head to Mickey's Not-So-Scary Halloween Party.