A Pirate's Life for Me

I recently visited a pirate ship serving as a major set piece for Pirates of the Caribbean: On Stranger Tides. The fourth installment of Disney's popular Pirates of the Caribbean movie franchise starring Johnny Depp as Captain Jack Sparrow, the movie is scheduled for a May 2011 release and is being filmed, in part, on location on the islands of Oahu and Kauai in Hawaii.

I thought I would be visiting the Black Pearl, Captain Sparrow’s ship. After all, the news media covering the ship’s arrival in Hawaii in February identified it as the Black Pearl. Web site Hawaii News Now covered the Black Pearl's arrival to Hawaii earlier this year with a video (link).

When I arrived at Heeia Kea Boat Harbor in Kaneohe (on the lush Windward side of Oahu), the ship did not look like the Black Pearl. I mean, any Pirates of the Caribbean fan can identify the Black Pearl, with its angel figurehead and black hull and sails, right? The Black Pearl was the ship that Captain Sparrow traded his soul for to Davy Jones, the captain of the Flying Dutchman. In exchange, Jones raised the sunken Black Pearl from the ocean floor. So what was this strange ship (no pun intended)? It clearly looked like a pirate ship.

I should have known—the answer was right before my eyes. If you take a close look at the video in the Hawaii News Now article, you see that the ship is flying the flag of the pirate Blackbeard, with a skeleton holding a spear in one hand and a goblet in the other.

So was this the Black Pearl or not? Well, yes and no. It turns out the ship's real name is the Sunset, the same ship that portrayed the Black Pearl in Pirates of the Caribbean: Dead Man's Chest and Pirates of the Caribbean: At World's End. Undergoing an extensive movie makeover after arriving in Hawaii, the Sunset had been transformed, and is now Queen Anne’s Revenge, Blackbeard’s ship. A major focal point of the new Pirates movie, the ship, along with Blackbeard (played by Ian McShane) and his daughter, Angelica (played by Penelope Cruz), cross paths with Captain Jack Sparrow—and Kaneohe, with its lush green mountains and bright blue ocean, provides a beautiful backdrop for the movie.

There was a lot of security at the boat harbor. I checked in with the security guard, parked, and walked to the a public viewing area less than a football field away from Queen Anne's Revenge. Even though it was still pretty early in the morning, there were already a dozen or so fans lined up in the viewing area. Throughout the entire time I was at the set, there was a constant stream of visitors. [KHON 2 News has a video of the ship at Heeia Kea Boat Harbor and interviews with its star-struck visitors (link).]

Upon our first sighting of Queen Anne's Revenge, my companion (who has read all of the Horatio Hornblower books by C. S. Forester and who made a special trip to Portsmouth, U.K. to see the HMS Victory on the 200th anniversary of the Battle of Trafalgar) said, "The top main mast is missing, and the mizzen-mast is misrigged because the lateen yardarm is directly below a square yardarm." I had no idea what he was talking about. I never would have noticed.

The Sunset/Queen Anne's Revenge is a 109-foot-long seaworthy ship. It has diesel-powered engines, so its sails are props. Likewise, I'd be willing to bet the same is true for its wheel. 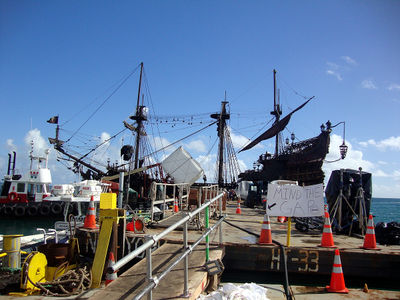 The Sunset, given a movie makeover into Queen Anne's Revenge, sits docked at Heeia Kea Boat Harbor in Kaneohe for filming. Photo by Julie China.

Decked out as the Queen Anne's Revenge, the Sunset looks amazingly authentic. Its hull (ship's body) looks like really old, worn wood. It is red and gold but mostly charred black, like it had been set on fire. The figurehead (figure on the ship's front end) is Blackbeard's insignia, a huge skeleton holding a goblet in one hand and a spear in the other. At the stern (rear) of the ship is a large iron cage with skeletons.

For the last several days prior to my visit, the crew had been filming at night. On the ocean-side of the ship was a barge that supplied the light for the filming. On the pier-side was also lighting behind a screen held up by a crane. I also saw a boat with a smoke stack that operates as a fog machine.

Unfortunately, neither Johnny Depp nor Penelope Cruz were there during my visit; I would have liked to have gotten just a tiny glimpse. On a previous occasion when word got out that the actors would be on set, hundreds of fans visited the set for a chance to see them. Since there is almost no public parking at the harbor, fans parked across the street, lining their cars up for almost a mile in either direction, and then walked to the harbor. They then waited to see if the actors might arrive, with no guarantee that if they did, they would be able to get a good look. When Depp finally did appear, he showed up dressed as Captain Sparrow, and visited with his fans, taking pictures and signing autographs, and apparently taking particular care to visit with the children who were there.

I had a great visit and now that my brush with Hollywood is over, I eagerly await the movie.