We arrived at Bluezoo, in the Walt Disney World Dolphin Hotel, at 6:15 p.m. We thought we were early but there were already a few people waiting when we checked in at the podium.

Right at 6:30, we were ushered into the restaurant. At first, there was a bit of confusion because we thought we were to be seated, which was wrong. Instead, we started our dining adventure with a cocktail reception in the bar area. We were offered a choice of red wine, white wine, or Bluezoo's signature Zooberry martini, which we tried—it was "berrylicious." 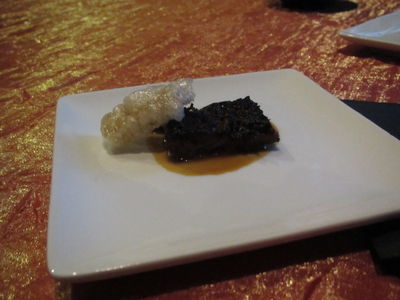 The first appetizer served at the event is pork shoulder with pork rind. Photo by Julie China. 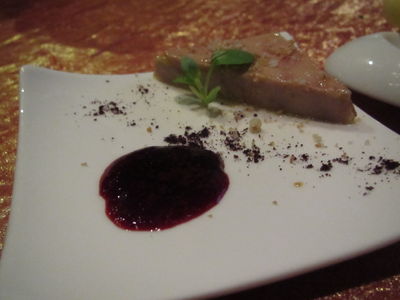 Waiters circulated the restaurant, serving a variety of appetizers. First we had the pork shoulder with pork rind, which was quickly followed by foie gras with huckleberry puree, scallop with truffle and caviar, and ceviche. 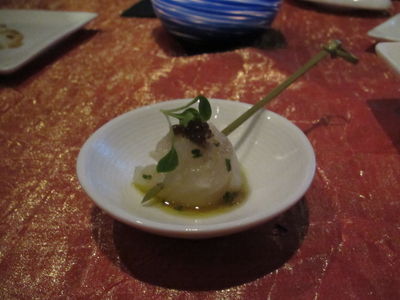 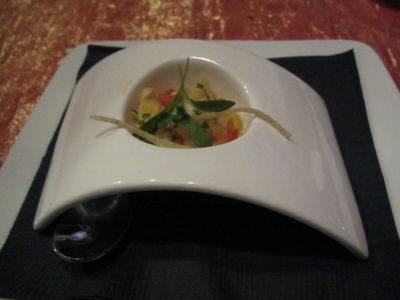 The ceviche appetizer is presented in an unusual serving dish. Photo by Julie China. 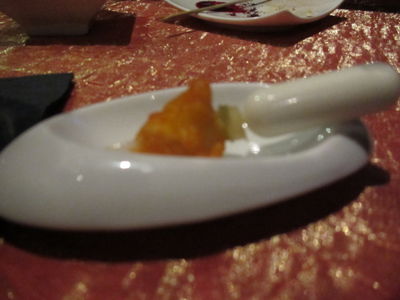 Being new to the bite-and-squeeze experience, my first attempt squirted directly to the back of my throat, creating a brief feeling of discomfort. But I'm a quick study, and by the second tube I was a pro. We kept the waiters busy, bringing drinks and hors d'oeuvre, and clearing dishes. 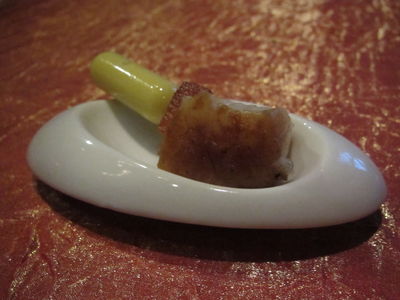 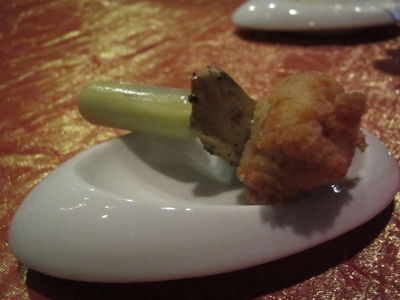 Buffalo chicken with "bite and squeeze." Photo by Julie China.

You would think we would be getting full at this point, but we were just getting started. At about 7:00, we were seated by the hostess. The entire restaurant had been reserved the event. We had a nice table along the far wall of the restaurant. And we met a great couple from Wisconsin who were seated at the table next to us. 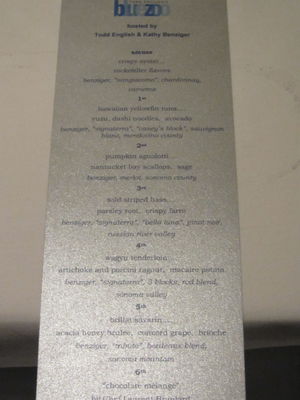 Here's how the rest of the dinner went: Before each course, Kathy Benziger would introduce a Benziger wine selected to accompany that course. First up was the amuse bouche (pronounced uh-MYUZ-boosh). This was a cleverly deconstructed Oyster Rockefeller. The wine pairing was a 2007 Sangiacomo chardonnay. This wine and the wine paired with the fifth course were my favorite wines of the evening. 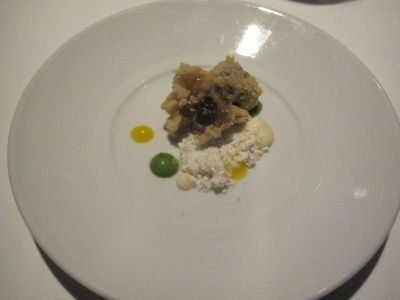 Next was the first course, a Hawaiian yellowfin tuna with Japanese yuzu citrus, dashi (Japanese soup stock) noodles, and avocado. This was my least favorite course. Living in Hawaii, I enjoy a lot of good quality fresh tuna, and the quality of this cut of fish was slightly disappointing. The course was paired with a 2009 Signaterra Casey's Block Sauvignon Blanc. 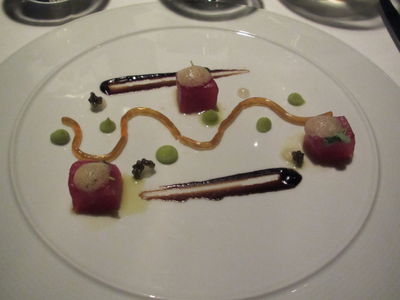 The second course was a pumpkin agnolotti (a type of ravioli) with Nantucket Bay scallops and sage. This course, along with the fourth, fifth, and sixth courses were my favorites. I could have eaten a huge bowl of the pumpkin-filled pasta and still wanted more, it was so good. The pasta was paired with a 2006 merlot. 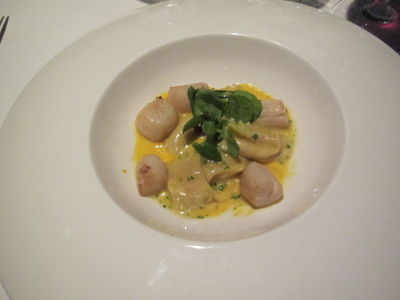 The third course was a wild striped bass with parsley root and crispy farro (a spelt-like grain). It was paired with a 2006 Signaterra Bella Luna pinot noir. 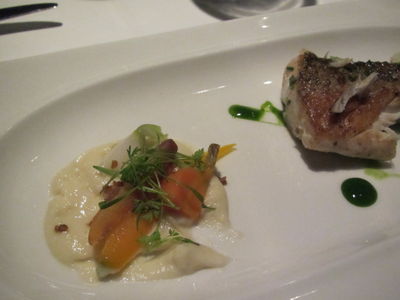 The third course consists of wild striped bass with parsley root and crispy farro. The slightly messy plating in the next picture is my fault. After the pasta course I was on a roll and forgot to take a picture before having my first bite of fish. Photo by Julie China.

The fourth course was a wagyu beef tenderloin with artichoke and porcini mushroom ragout, and pomme macaire (twice-cooked) potato. Can you say “melts in your mouth tender?” This was another big hit. This course was paired with a 2007 Signaterra Three Blocks, a red blend of 64% Cabernet Sauvignon and 36% Merlot. 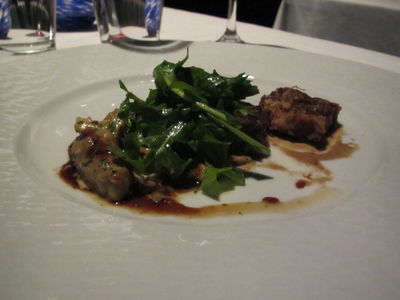 The fourth course consists of wagyu tenderloin with artichoke and porcini mushroom ragout, and macaire potato. Photo by Julie China.

The fifth course, the cheese course, consisted of a Brillat-Savarin (triple-cream Brie) cheese, acacia honey brulée, Concord grape, and brioche. I have never had anything like the cheese brulée—cheesy, sweet, crisp sugary top—so good! This course was paired with my favorite wine of the evening, a 2006 Tribute Bordeaux blend. Mmm...there was no wine left in that glass. 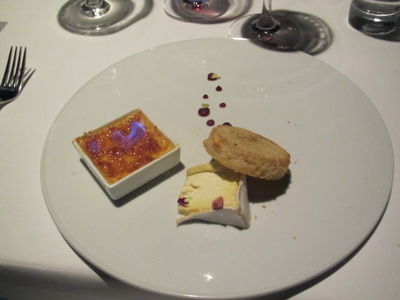 The fifth course is a cheese course, consisting of Brillat-Savagin Brie, acacia honey brulee, and brioche. Photo by Julie China.

The sixth and final course was a fabulous dessert, a chocolate melange prepared by Chef Laurent Branlard. But first, we were served a “first press” cocktail. The drink was under a layer of ice, which was smashed at the table. I didn't care for it much because all I tasted was grape and simple syrup. 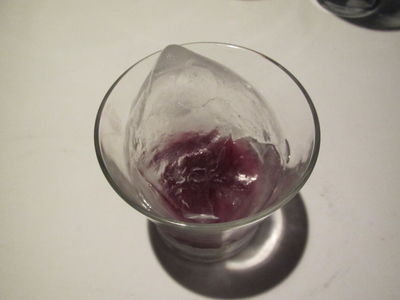 All was forgotten, however, when a plate of beautiful desserts was placed before me. The melange consisted of Bavarian chocolate with pop rocks topped with gold leaf, orange chocolate sorbet, s'more (a marshmallow with chocolate center sprinkled with graham cracker), crisp and creamy layers of coffee and caramel, and a lime chocolate creme brulée. If I had to choose, my favorites were the chocolate with pop rocks and the creme brulée. All of this, plus a cup of coffee, and our culinary adventure was over. 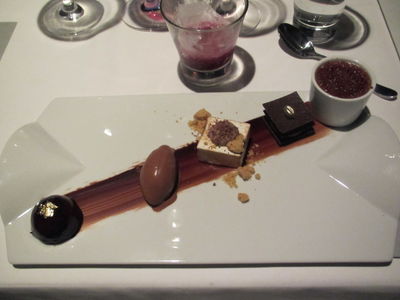 The sixth course is the dessert course. From left to right,: Bavarian chocolate with pop rocks topped with gold leaf, orange chocolate sorbet, s'more, crisp and creamy layers of coffee and caramel, and a lime chocolate creme brulee. Photo by Julie China.

During the meal, Kathy Benziger and Chef English took time to visit with their guests. Benziger, Chef English, and Chef Branlard served a memorable meal. Props also go to our waiters who had a thorough knowledge of both the food and wine. 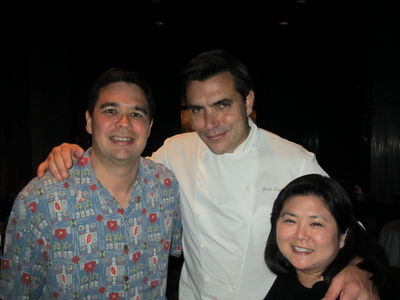 It was about 9:30 p.m. when we left Bluezoo. The cost of the event was $225 per person plus tax, gratuity included. It might seem pricey, but it was worth every penny.