The 33 Chilean miners who were rescued 69 days after they were trapped underground in a collapsed mine, will now be traveling to Florida for a six-night trip to Walt Disney World.

Disney is treating the miners, their immediate families, and rescuers to a six-night trip to the Walt Disney World Resort fom January 27 to February 2, 2011. The miners will serve as honorary Grand Marshals of the Main Street, U.S.A. parade, as wewelcome Chilean dinner with Disney characters, time to visit the four theme parks, a group photo in front of Cinderella Castle, and a $500 gift card per family.

There's no question that New Year’s Eve is one of the busiest days of the year at the Walt Disney World Resort, but for those who weather the crowds, there will be perks. The resort look its best decked out in holiday decorations, and the four theme parks offer extended operating hours with tons of extra special entertainment and dining options: 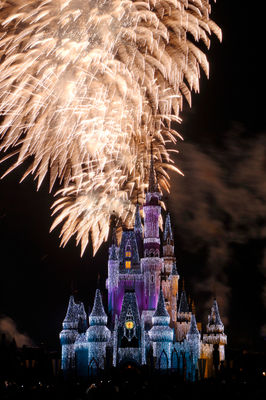 Park dining – There will be several special dining opportunities in the parks (requires theme park admission):

Celebrating outside the parks – Outside the theme parks, there will be many ways to celebrate:

Resort dining – ring in the New Year at:

Other Disney resorts may also have special New Year’s Eve dining options as well, so be sure to check with your resort.

Reservations are filling up fast and your first choice may already be fully booked. So if you really have your heart set on a particular party or dinner, make your reservation now.

If you want to be one of the first to sail aboard Disney’s brand new cruise ship, the Disney Dream, but have not yet made a reservation, Disney is now offering a $200 onboard credit for new bookings on certain cruises to the Bahamas:

You must book from now until February 9, 2011. This offer is only available for new bookings and must be booked through a travel agent and using booking code DTY. MousePlanet’s preferred Disney travel providers are MouseEar Vacations.com (link), Small World Vacations (link), and Get Away Today (link).

Disney Parks has released a video updating the construction status of the Disney Dream:

Adventures by Disney teams up with Disney Cruise Line

Adventures by Disney has joined with Disney Cruise Line to offer cruise passengers an upgraded shore experience. Guests aboard Disney’s Mediterranean and Alaska cruises can add tour packages that include shore excursions led by Disney Adventure Guides. In Florence, Italy, this includes a privately guided tour to see Michaelangelo’s David. In Alaska, this includes a helicopter ride to a glacier.

Guests can also add a 4-day/3-night pre-cruise Escape package for Barcelona or Vancouver, the ports of embarkation. The Vancouver Escape begins with breakfast at the Vancouver Aquarium, and includes a tour of the Marine Science Center, a tour of Stanley Park, a gondola ride up Grouse Mountain, and a visit to the Refuge for Endangered. The 4-day/3-night Barcelona Escape includes a visit to Gaudi’s beautiful gothic Sagrada Familia Cathedral, and more.

These upgrades are available for booking prior to select departure dates. For more information, call the Disney Cruise Line at 888/272-0571.

…Now through early January, you can have your pet’s portrait taken by a Disney PhotoPass photographer at the Walt Disney World Resort. Call (407) 934-4004 to make a 10 or 20 minute appointment.

…Several hotels on Hotel Plaza Boulevard lost electricity for about 30 minutes on Christmas Eve when a squirrel made contract with electrical equipment.

…Disney is currently holding character look-alike auditions for many characters including Rapunzel and Flynn Rider, the Disney Princes and Princesses, and the Disney Fairies. For more information, go to Disney Auditions (link).

…A U.S. District Court judge denied Disney’s request for a new trial in the case of Celador International Ltd. versus the Walt Disney Company. Celador, the creators of Who Wants to be a Millionaire, sued Disney over network fees and merchandise profits and was awarded $269.2 million in damages plus $50 million in interest. It is anticipated that Disney will appeal. Who Wants to be a Millionaire – Play It! was an attraction at Disney’s Hollywood Studios from 2001 to 2006, before being replaced by the hugely popular Toy Story Mania!

…Disney is eliminating 14 jobs, 11 of them at Walt Disney World. According to the Orlando Sentinel (link), the jobs are with the global-business development group of the Walt Disney Co.'s theme-park division. The unit is tasked with evaluating future capital projects for Disney's parks.

…Registration is now open for the Champion 5K at during ESPN The Weekend (link). Sign up now!

…The 2011 Disney’ Princess Half Marathon is 82 percent full for individual and team registrations. You can register at the official event web site (link).

Discounts of 15-35 percent are available for room-only reservations for stays at Walt Disney World for most nights February 17 – April 16, 2011. Time is of the essence in making your reservation, though, as rates vary depending not only upon your dates of travel and the resort category at which you are staying, but also the date that you make your reservation. Discounts are 5 percentage points lower if you book by the end of the year.

Deals are also available for January 2 – February 16, 2011. Discount percentages appear to match those for the other dates.

You can book the deal from now through February 13, 2011, with the deeper discount available for reservations made by December 31, 2010. Note that the rooms may go fast. The number of rooms available at these rates is limited. Minimum length of stay requirements may apply for Friday or Saturday arrivals.

Passholders can save 32 to 42 percent off their room rates for stays at Walt Disney World for most nights February 6 – April 16, 2011. Rates vary depending on your dates of travel and the resort category at which you are staying:

Deals are also available for January 2 – February 5, 2011. Discount percentages appear to match those for the other dates.

You can book the deal from now through your day of arrival, through the rooms may go fast. The number of rooms available at these rates is limited. Suites and 3-bedroom Grand Villas are not included. An adult passholder must show their pass at check-in. Minimum length of stay requirements may apply for Friday or Saturday arrivals.

From now through September 28, 2011, active and retired U.S. military personnel can purchase 4-Day Military Promotional Tickets with either the Park Hopper or Water Parks Fun and More option for $138 per ticket, plus tax, or with both the Park Hopper and Water Parks Fun and More options for $165 per ticket, plus tax. No Base ticket is available with this offer.

Eligible service members include active or retired members of the U.S. military including the U.S. Coast Guard, National Guard, and Reservists. Disney Military Promotional Tickets can be purchased at Shades of Green or at a participating military base (MWR/ITT) office. There is no tax charged for these tickets but they must be activated at a theme park ticket window. Tickets may also be purchased at Walt Disney World Park Ticket Offices and Guest Relations Offices where tax will be charged. No more than six tickets may be purchased by any eligible member of the U.S. military (or their spouse, but not both) for themselves, family members, and friends, and all tickets must be purchased at the same time. If the immediate family has more than five dependants, additional tickets may be purchased for the dependants, however, additional tickets for guests may not be purchased. Valid military identification is required. The tickets are non-transferable and may not be resold.