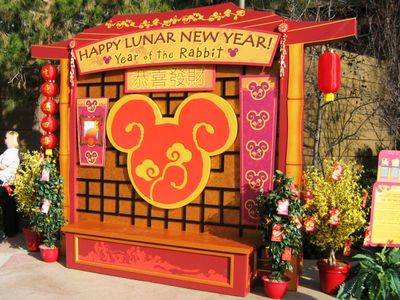 A festive backdrop with a not-so-hidden Mickey allows guests to create their own portrait at the Happy Lunar New Year Festival. Photo by Britt Winslow.

The fourth installment of Family Fun Weekends kicked off at Disneyland last week with Happy Lunar New Year Festival. This celebration is based on the Chinese lunar calendar, which, unlike the Western calendar that always starts the new year on January 1, is instead based on the lunar cycle, with the start of the new year changing a bit every year.

For 2011, the lunar new year began on February 3, and the year's Chinese zodiac symbol being the rabbit. A sign explaining lunar new year celebrations also allowed guests to figure out which of the 12 animal signs they were born under. 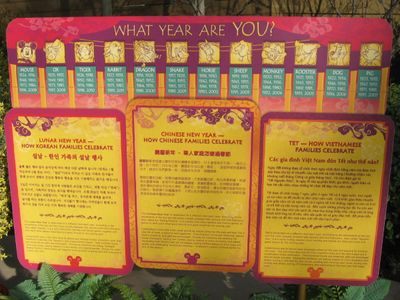 An informative sign explains the different Lunar New Year traditions that are celebrated in Korea, China, and Vietnam. Photo by Britt Winslow.

Similar to previous Family Fun Weekends, there were plenty of photo opportunities with Disney characters. 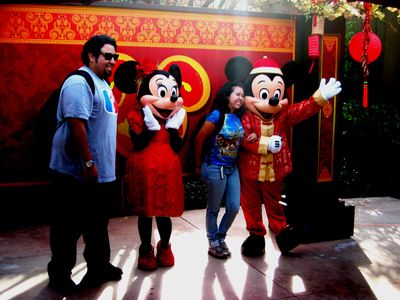 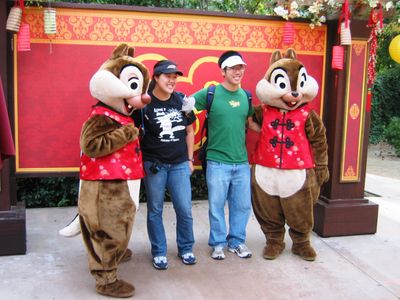 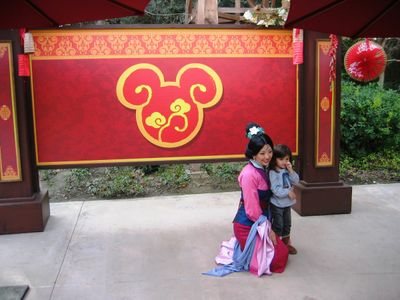 Mulan and a future princess prepare for a dream photo opportunity. Photo by Britt Winslow. 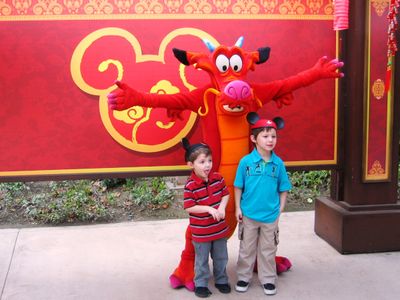 Some of the outdoor vending options at the Happy Lunar New Year Festival were tied into the Asian theme. Egg rolls and honey green tea, two items not normally found in Disneyland, were available for hungry guests. 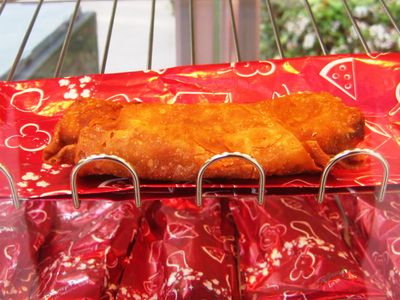 Specially themed foods like this giant eggroll were available at the Happy Lunar New Year Festival. Photo by Britt Winslow.

Besides character photos and food, there was live entertainment throughout the day. Traditional Asian dances were performed by Dance Impressions Productions and exciting martial arts demonstrations were given by Northern Shaolim Kung Fu Association. 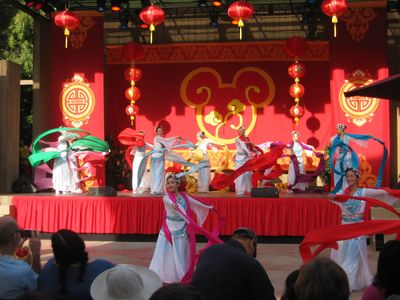 Happy Lunar New Year Festival resumes February 11 to 13. Beginning February 18 to 20, Family Fun Weekends move from the Festival Arena in Frontierland to New Orleans Square for the celebration of Mardi Gras. The Mardi Gras celebrations continue through the weekends of February 25 to 27 and March 4 to 6.

The Disneyland Resort is the site for the 25th annual AIDS Walk Orange County on the morning of Sunday May 1, 2011. Scheduled to begin at 7:00 a.m., an estimated 10,000 participants are projected to walk, volunteer or support the event as it winds through Disneyland, Disney's California Adventure Park and Downtown Disney.

You can sign up to walk, volunteer, or donate to AIDS Walk Orange County here (link) and also learn more about the prevention of HIV/AIDS.

D Street in Downtown Disney hosted a special event last Saturday in celebration of the debut of the Disney Double 5 Collection. Artist and designer Les Schettkoe made a special appearance from 5:00 to 8:00 p.m. to sign his newly released T-shirts, hats, and artwork. 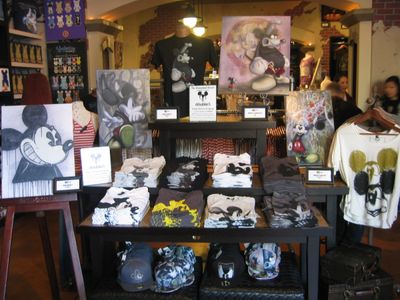 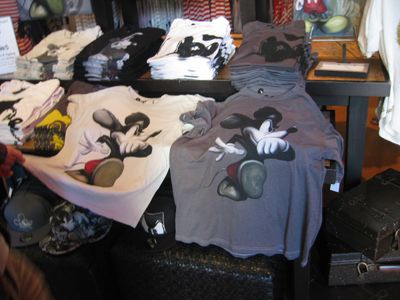 Guests can choose from an assortment of new Angry Mickey tees at D Street in Downtown Disney. Photo by Britt Winslow. 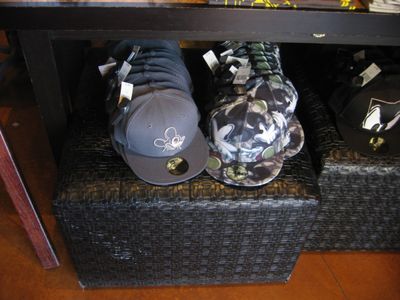 Hip new hats from the Disney Double 5 Collection are sold at D Street in Downtown Disney. Photo by Britt Winslow. 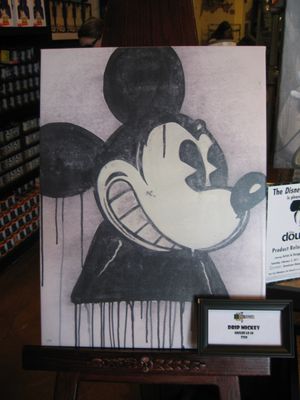 Dripping Mickey was one of several pieces by Les Schettkoe available as limited edition giclees at D Street in Downtown Disney. Photo by Britt Winslow.

Construction crews march on throughout Disney's California Adventure Park. Some noticeable progress has been made in the newly reimagined Paradise Pier dining venues. 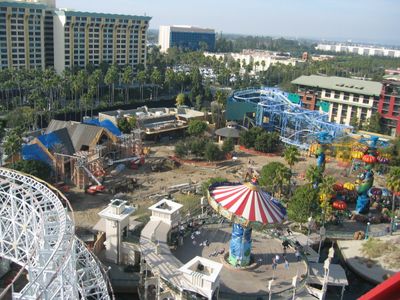 The rooflines and facades of Boardwalk Pizza and Pasta and Paradise Grill continue to change as the opening dates grow near. Photo by Britt Winslow. 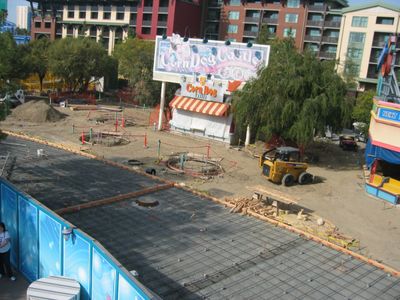 Rebar has been prepared for the new concrete boardwalk along Paradise Pier in front of Corn Dog Castle. Photo by Britt Winslow.

Ariel's Undersea Adventure seems to show more and more progress every week. Some of the show building features that debuted last week in the Blue Sky Cellar refresh are becoming visible to the Disney Guests with a keen eye. 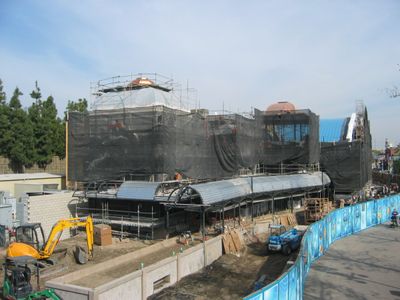 Copper colored roof caps have been added to the west side of Ariel's Undersea Adventure. Photo by Britt Winslow. 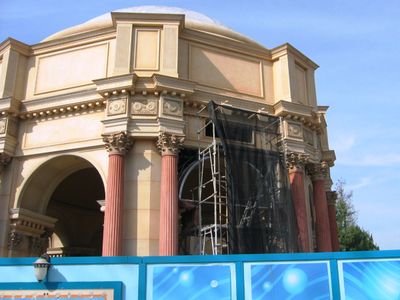 A metal frame in an archway of the Palace of Fine Arts has been installed in preparation for the Ariel's Undersea Adventure entrance marquee. Photo by Britt Winslow. 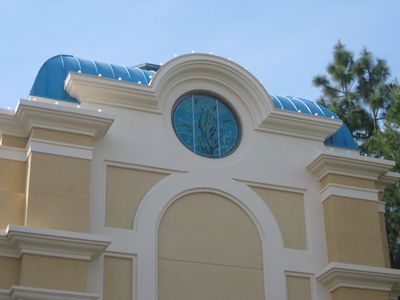 A circular piece of art glass finishes off the east side of the Ariel's Undersea Adventure facade. Photo by Britt Winslow. 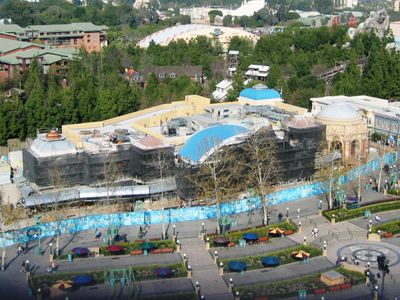 A view of Ariel's Undersea Adventure from Mickey's Fun Wheel shows how close the show building is to completion. Photo by Britt Winslow.

The most surprising change to Disney's California Adventure Park this week has been the removal of a portion of the southern facade in Paradise Pier. 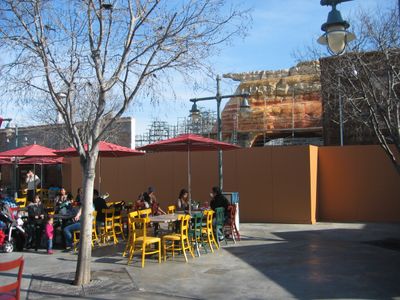 A portion of the southern facade in Pacific Wharf has been removed giving guests a closer view of Cars Land. Photo by Britt Winslow.

...February 8, 2011 is the 10-year anniversary of the opening on Disney's California Adventure Park. No public acknowledgment for guests wishing to celebrate the the double digit milestone has been announced. Sarah Tully of the Orange County Register has written a nice article (link) about the first decade of the second park at the Disneyland Resort.

...Visitors planning trips to the Disneyland Resort should make a point to check the Current Refurbishment/Attraction Closures section each week for the most recent updates. The Disneyland Resort Web site currently only publishes refurbishment information about six weeks in advance. Be sure to check the most recent Park Update (link) for the latest changes, as MousePlanet does not edit past Park Updates to reflect changes.

We also recommend checking the convention calendar at the Anaheim/Orange County Visitor and Convention Bureau Web site (link). When looking at that site, remember to note both the number of people and the number of rooms resulting from each convention. A gathering of 25,000 people booking few room nights (indicating most will be driving in to the area for their meeting) can impact traffic around the Resort much more than a crowd of 25,000 staying in area hotels. Of course, that second group is going to make finding a hotel room more difficult (and possibly more expensive), so it's best to book your own room as early as possible if you see that a big convention is in town during your trip.

If you know of any additional discounts, offers, promotions, or contests that should be listed in this section, drop us a line (link). Note, we are no longer listing offers from the Anaheim-Orange County Visitor & Convention Bureau, as their convenience fee negates any savings.

Spring discount offers –In addition to the Promotional Park Hopper bonus tickets listed above, the Disneyland Resort released two hotel discounts for Spring 2011. We definitely recommend comparing prices on these offers before you buy, as it may be less-expensive to book the hotel and ticket separately.

The Resort is offering discounts of up to 35 percent on select Disneyland Resort Hotel stays for arrivals January 2, 2011 through April 13, 2011. Travel must be booked by February 19, 2011, and a two-night minimum stay is required. Offer is not valid January 14 & 15, or February 18 & 19. Discount applies only to standard and concierge level rooms. There is a limit of two rooms per reservation, and a maximum of five people per room.

Book a three-night, four-day package at a Disneyland Resort Hotel and get a fourth night free. Package includes four nights at a Disneyland Resort Hotel and four-day park hopper bonus tickets for a family of four. This offer is valid for arrivals from January 4 through April 11, 2011; travel must be completed by April 15, 2011. This package also includes one collectible pin, lanyard and luggage tag per person; one $20 ESPN Zone game card per package, admission to Mickey's Toontown Morning Madness, preferred seating at select shows in DCA, and a "character call" from a Disney character.

Book online at the Disneyland.com Web site (link), call Walt Disney Travel Company at (714) 520-6425, or contact your favorite travel agent and ask them to look for the "Spring Package Offer."

Costco Travel Packages – Many different travel packages including visits to Disneyland and Disneyland hotels are available through Costco.com. When purchasing a Costco Disneyland travel package, extras that will be included are: Mickey's Toontown Madness admission (currently available Mondays, Wednesday, Fridays, and Saturdays), a character breakfast collectible pin and lanyard, and a Costco luggage tag per person, plus a $20 Disneyland Resort gift card per package.

Disney's Resort Magic and Good Neighbor Magic Packages – Package includes accommodations one of the three resort hotels or at one of 40 Good Neighbor hotels; Souvenir Park Hopper ticket with voucher for admission to Mickey's Toontown Morning Madness, plus one Magic Morning (early entry) for three-day or longer Park Hoppers; preferred seating at four DCA attractions (Disney's Aladdin – A Musical Spectacular, Muppet*Vision 3D, It's Tough to be a Bug!, Golden Dreams); Preferred Showing of Turtle Talk with Crush (Priority Viewing at the first Turtle Talk with Crush show of the day, on any one day - one voucher per Guest); Disney Dream coin keepsake (one per package), luggage tag and lanyard with pin; a Downtown Disney Fun Card; and a "Character Call" from Mickey, Minnie, Goofy or Crush. Contact Disney Travel or your favorite travel agent.

Character Dining Vouchers – Discounted character dining vouchers are available for purchase online, in advance of your trip, through Get Away Travel (link).

Disney Visa Discounted Stroller Rental – If you have a Disney Visa card you can rent up to two strollers at a discount of 50%. This offer is valid only at the Main Gate rental location between Disneyland and Disney California Adventure.

ESPNZone MVP Club – Membership in the MVP Club does not offer any discounts on food. However, once a member you can make an online reservation for your party up to three days in advance and will get a 25% increase in points purchased when playing games in the Sports Arena (and 40 bonus points at activation). You must register online and your membership card will then be mailed to you within two weeks. The card must then be activated at any ESPNZone by the person who signed up for the card and ID will be required (link).