Even You Can Be a Star at Walt Disney World!

Think that you've "been there, done that" at Disney's Hollywood Studios? Here's a different way to experience the studios in an whole new light. Volunteer! One of the greatest enduring qualities of Disney's Hollywood Studios are the opportunities you have to "be in the show." In truth, these are orchestrated Magical Moments that occur in all of the parks on a daily basis. Those participating have such a strong, positive experience, that they become loyal Guests who tell everyone back home about their experience, and makes plans to come back again. Magical Moments happen in all the parks and throughout the Walt Disney World resort, but these experiences are unique because of their tie to showbiz.

Let's look at some of the very best of these experiences. And let's look at a few that have moved on. 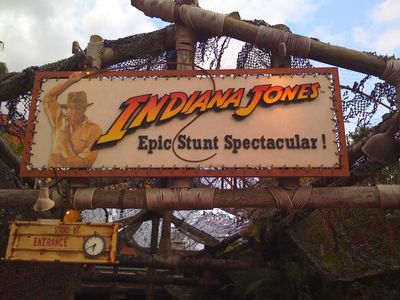 Being a volunteer in this show is an exciting experience. Photo by J. Jeff Kober.

If you want this opportunity, and you're 18 or older, I suggest sitting toward the front of the theater, then waving and shouting like a crazy guy when they ask for volunteers. If you're chosen, you'll join others in the audience in participating in a high-action stunt show. You'll dress up in the latest turbans and become part of the ambiance of Cairo, Egypt. It's all fun, and of course, one of the volunteers is much more fun than anyone. I'm hopefully not giving anything away, but here is the one place where Disney will make fun of a volunteer tourist. But what about you? Do you want a starring role in the ensemble? Then cross your fingers because one individual (more often a larger male) will be chosen to do a big death scene. And if you're chosen, ham it up to the max. Trust me, the applause will follow! It's all a great experience. 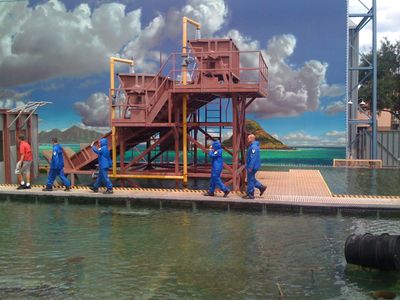 Water, water everywhere...and not a drop to drink! Photo by J. Jeff Kober.

You must love water to be a volunteer for this attraction. No, I'm not talking about everybody getting wet on the tram in Catastrophe Canyon, I'm talking about those who volunteer to participate in the Harbor Attack. The Harbor Attack is a special pool facility that puts together the illusion of being attacked in a Navy ship while at sea. The experience is filled with water tanks and pyrotechnics. Four volunteers are typically chosen toward the entrance of the turnstile that leads directly right into the first outdoor viewing area. Before participating, you'll put on blue rubber suits. One of you will sit in the wheelhouse where gallons of water will dump toward you. The rest of you will be swabbing the deck as air raids seemingly fly over you. Again, you need to be 18 or older. 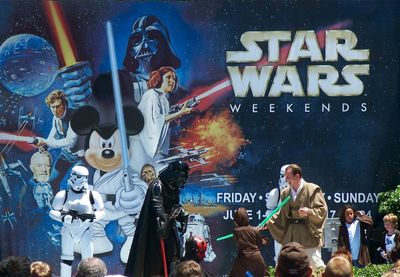 "Learning you are, young Padawan!" Photo by J. Jeff Kober.

Who doesn't want to join forces with a Jedi Knight to fight against Darth Vader! This interactive 30-minute show arms kids with lightsabers, then teaches them the ways of the force as they prepare to do battle against the Dark Side. Bummer that you really need to be age 4-12 to volunteer. Approximately a dozen children will be chosen in any show. If this is what your child wants, arrive a little early to the show and stand toward the front. Then make sure your little one expresses their interest (not yours) in participating.

There's one other cool volunteer opportunity available to a young person at Lights, Motors, Action! Here you will "operate" a giant remote car. Sit center and low in the audience for the best opportunity. It's very difficult to be selected, but your young one will remember the experience for years to come. 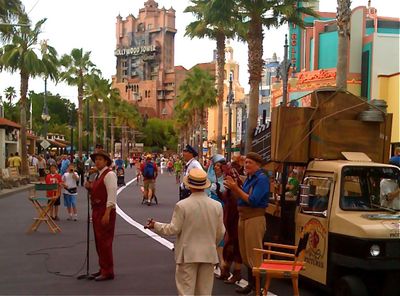 The Citizens of Hollywood are out in full force, and they want to meet you. At times they are wandering out on the streets. Other times, they work as a team to perform a particular improvisational act. Enjoy them whenever and wherever. If they're out wandering around, go up to them and chat. They will be in character from the 1930s and 1940s of Hollywood. So they won't ask, "how is your day going at the Disney Hollywood Studios?" Rather, they will ask, "How are you enjoying Hollywood?" If you see them gathering a group for a small skit/show, get out in front and volunteer when they ask. They most often congregate at the head of Sunset Boulevard in front of the Beverly Sunset. Or they often gather on Hollywood Boulevard between Keystone Clothiers and Hollywood and Vine Restaurant. You'll find them out and about and random times of the day. 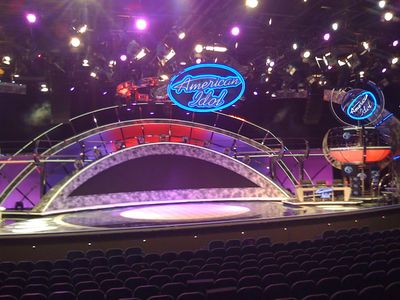 This is as close as you can get to feeling like you're on American Idol. Photo by J. Jeff Kober.

Of all the volunteer experiences at the Studios, this is the most serious. More than fun, this is a legitimate way to perform in front of a live audience. While you're not on the actual TV show, it's a real show, and the experience will leave you with a rush along with memories for a lifetime. Even if you're not sure whether you have what it takes, go through the audition anyway. It's still a remarkable experience, and they really try to set you up to be as successful as possible. If you're serious, read my early article about the audition process, and what's involved (link). The music list has changed a little, but you should come prepared with three songs from the list that you're comfortable singing with. Think about what you're wearing that day. You really don't want to be in something that feels silly later on. Then, show up to the audition entrance across from Sci-Fi Dine-In Theater early in the day for the best possible chance to perform. Remember, that if you are chosen in that show, you'll be asked to come back at the end of the evening to perform against all of the top performers during the day. So plan on being at the Studios for the entire day. You only have to be 14 to audition, and can come from anywhere around the world to perform, but you do have to be between 16 and 28 in order to receive the ultimate prize of a Dream Ticket, that will act as a sort of FastPass to auditioning for the real American Idol TV program. You must also be a U.S. citizen or legal permanent resident eligible to work full-time in United States.

The last thing I would suggest for any of these volunteer roles is to make sure to bring a friend along with a camera. You'll want someone to capture those magical moments as they occur.

The notion of volunteering to be in the show has been around since the park opened in 1989. I would be remiss if I didn't take time to honor some of the other great attractions that have long since left, but were terrific for bringing volunteer opportunities to those who came to the park.

1. SuperStar Television. It's 7:59 a.m., July 18, 1955 as Superstar Television begins it's broadcast day. This show involved a ton of volunteers, some of which were cast to sit behind the bar at Cheers or broadcast the morning news. You could also join the crew of Gilligan's Island, or try your hand at wrapping chocolates with I Love Lucy.

2. Monster Sound Stage. This wonderful little show combined the talents of Martin Short and Chevy Chase along with Jimmy McDonald of Disney Sound FX fame (and the former voice of Mickey Mouse years ago). Here you didn't volunteer to be the star, but rather "Foley" artists who would produce sound FX to a horror film. It was all great fun, and if they can bring back Captain EO, why don't they bring back this show?

4. Inside the Magic Special Effects & Production Tour. In the early years of the Disney-MGM Studios, this show evolved more than any other. It no longer exists today, but it did utilize volunteers, such as kids riding a bumble bee from Honey, I Shrunk the Kids, or people creating sound FX on the "Foley" stage. 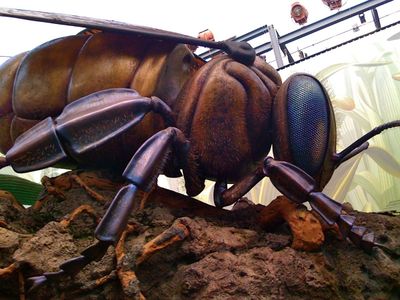 Does this insect look familiar? Have you or your children taken a ride on one of these things? Photo by J. Jeff Kober.

5. Disney Studios Production. But the real "you can be a star" opportunities came by way of those productions that actually filmed shows at the Disney-MGM Studios. Beyond opportunities to sit in the audience and watch shows like Let's Make a Deal, Win, Lose, or Draw and The Mickey Mouse Club (MMC), you could actually audition and be chosen.

What's really interesting about this is that you pay a premium price to come into a park and be a volunteer that helps create a great show for all the guests. And yet you aren't getting paid! Moreover, you're likely to love the experience more than those who didn't volunteer!

That's part of the magic at Disney. Can you create people who want to volunteer to help your organization be successful? Only to have them walk away as your biggest fans? If you can do that, you're creating magic, as well.

So what about you. Have you been a volunteer? What was your experience like? Did it make you a bigger fan of Disney's Hollywood Studios? Share with us your experience. We'd love to hear about it.

Moreover, have you volunteered to do something that took time and money to do, and still you walked away even more excited for the very thing you participated in? Share that with us as well.

Meanwhile, here's to making the magic in your business.