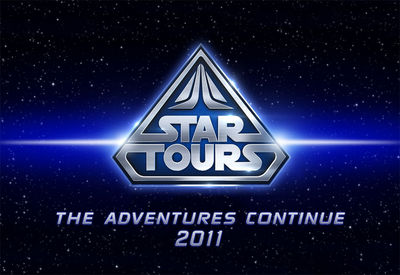 Star Tours—The Adventures Continue does not officially open until June 3. However, cast member previews began last week and, with exclusive annual passport previews and a Disney Parks blog preview beginning this weekend, there is already a lot of chatter about Disneyland's relaunch of the classic Tomorrowland attraction. MousePlanet reader CMHusband wrote, "My wife just got back from the CM preview of Star Tours II. She can't stop saying that it's beyond amazing...That its nothing like the old ride. Really looking forward to riding it now."

The Disneyland Resort annual passholder previews for Star Tours—The Adventures Continue begin May 23 and run through June 1. Similar to the Disney Parks Blog preview, winners were selected by a random drawing. Each day the previews will be in two blocks: The first block from 9 a.m. to 1 p.m. and the second 4-8 p.m. Eligible annual passholders can bring up to five more passholders along for the preview.

If you have participated in on of the previews or would like to read about others who have, visit the MousePlanet discussion forums.

Blackbeard Joins Pirates of the Caribbean

New Orleans Square, Frontierland and the Rivers of America have finally returned to normal. Gone are the grandstands and IMAX movies screen for the Pirates of the Caribbean: On Stranger Tides world premiere that changed the western portion of Disneyland for almost three weeks. One pirate, however, has decided to stick around the Happiest Place on Earth for a little while longer. Beginning on May 20, Captain Blackbeard will replace Davy Jones as the ghostly image who appears on the fog curtain at the end of the pirates grotto portion of Pirates of the Caribbean. 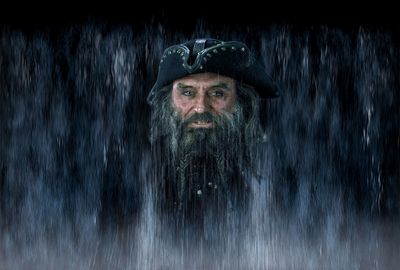 Construction walls still dominate much of the landscape around the Disneyland Hotel as workers continue multiple demolition and construction projects. Tangaroa Terrace, the restaurant replacing Hook's Point, is scheduled to open in less than two weeks. A lot of the facade for the restaurant has been completed. 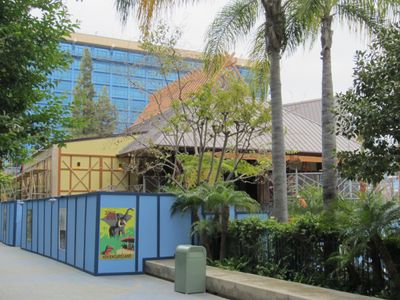 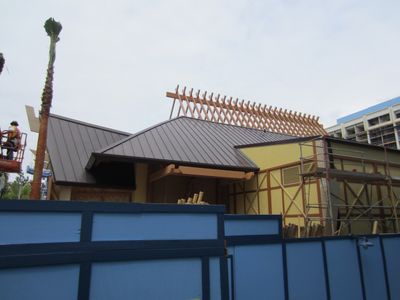 Workers put the finishing touches on the facade of Tangaroa Terrace at the Disneyland Hotel. Photo by Britt Winslow.

Some of the construction walls surrounding Ariel's Undersea Adventure were removed last week to reveal one of the queue areas for the attraction. 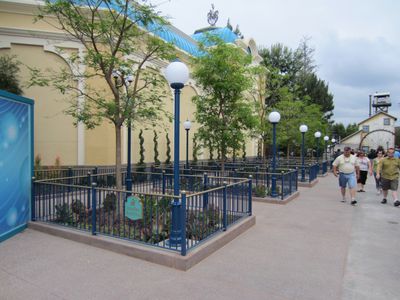 Construction walls have been removed to reveal one of the queue areas along the east side of the Ariel's Undersea Adventure attraction. Photo by Britt Winslow. 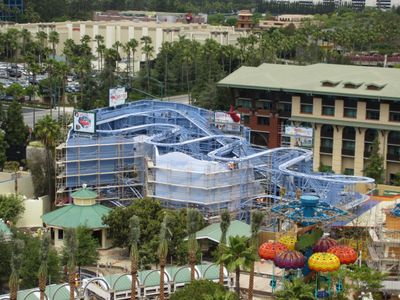 Workers navigate the scaffolding surrounding Goofy's Sky School as they paint clouds on the exterior. Photo by Britt Winslow. 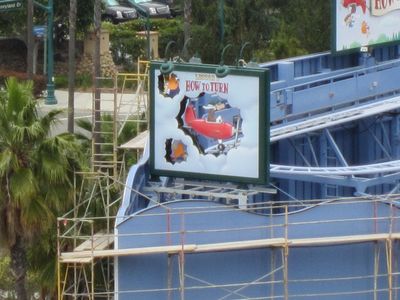 One of the four billboards added to Goofy's Sky School this week as the attraction nears its grand opening. Photo by Britt Winslow.

Construction in Sunshine Plaza produced a cinder block structure on the west side on the way to A Bug's Land. 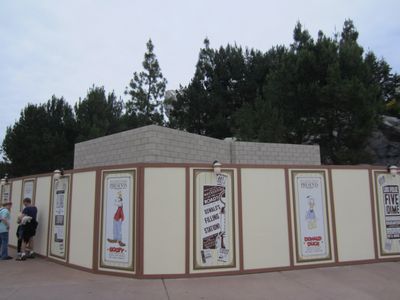 A cinder block structure was erected last week in Sunshine Plaza as part of the transformation to Buena Vista Street. Photo by Britt Winslow.

The remaining portions of the dining area outside of Baker's Field Bakery and Bur-r-r Bank Ice Cream, as well as the information booth, were removed from Sunshine Plaza last week. 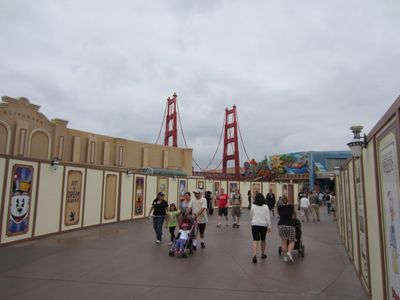 The information booth in front of Engine – Ears Toys was removed last week to make way for the Red Car Trolleys. Photo by Britt Winslow.

...Visitors planning trips to the Disneyland Resort should make a point to check the Current Refurbishment/Attraction Closures section each week for the most recent updates. The Disneyland Resort Web site currently only publishes refurbishment information about six weeks in advance. Be sure to check the most recent Park Update (link) for the latest changes, as MousePlanet does not edit past Park Updates to reflect changes.

We also recommend checking the convention calendar at the Anaheim/Orange County Visitor and Convention Bureau Web site (link). When looking at that site, remember to note both the number of people and the number of rooms resulting from each convention. A gathering of 25,000 people booking few room nights (indicating most will be driving in to the area for their meeting) can impact traffic around the Resort much more than a crowd of 25,000 staying in area hotels. Of course, that second group is going to make finding a hotel room more difficult (and possibly more expensive), so it's best to book your own room as early as possible if you see that a big convention is in town during your trip.

If you know of any additional discounts, offers, promotions, or contests that should be listed in this section, drop us a line (link). Note, we are no longer listing offers from the Anaheim-Orange County Visitor & Convention Bureau, as their convenience fee negates any savings.

Costco Travel Packages – Many different travel packages including visits to Disneyland and Disneyland hotels are available through Costco.com. When purchasing a Costco Disneyland travel package, extras that will be included are: Mickey's Toontown Madness admission (currently available Mondays, Wednesday, Fridays, and Saturdays), a character breakfast collectible pin and lanyard, and a Costco luggage tag per person, plus a $20 Disneyland Resort gift card per package.

Disney's Resort Magic and Good Neighbor Magic Packages – Package includes accommodations one of the three resort hotels or at one of 40 Good Neighbor hotels; Souvenir Park Hopper ticket with voucher for admission to Mickey's Toontown Morning Madness, plus one Magic Morning (early entry) for three-day or longer Park Hoppers; preferred seating at four DCA attractions (Disney's Aladdin – A Musical Spectacular, Muppet*Vision 3D, It's Tough to be a Bug!, Golden Dreams); Preferred Showing of Turtle Talk with Crush (Priority Viewing at the first Turtle Talk with Crush show of the day, on any one day - one voucher per Guest); Disney Dream coin keepsake (one per package), luggage tag and lanyard with pin; a Downtown Disney Fun Card; and a "Character Call" from Mickey, Minnie, Goofy or Crush. Contact Disney Travel or your favorite travel agent.

Character Dining Vouchers – Discounted character dining vouchers are available for purchase online, in advance of your trip, through Get Away Travel (link).

Disney Visa Discounted Stroller Rental – If you have a Disney Visa card you can rent up to two strollers at a discount of 50%. This offer is valid only at the Main Gate rental location between Disneyland and Disney California Adventure.

ESPNZone MVP Club – Membership in the MVP Club does not offer any discounts on food. However, once a member you can make an online reservation for your party up to three days in advance and will get a 25% increase in points purchased when playing games in the Sports Arena (and 40 bonus points at activation). You must register online and your membership card will then be mailed to you within two weeks. The card must then be activated at any ESPNZone by the person who signed up for the card and ID will be required (link).