Welcome back to another edition of Disney Stuff.

Sometimes it’s not a whole collection of things that inspires an article. Sometimes it’s that one little piece of unique Disney stuff that I’ve come across that attracts me when I’m looking for a subject to write about. As I scanned across my shelves full of Vinylmations, toy cars, “# 1 Dad" gifts from my kids, and all sorts of other Disney, Muppets, Beatles, and classic TV paraphernalia that I’ve accumulated over the years, this little box of vintage Disneyland birthday candles caught my eye: 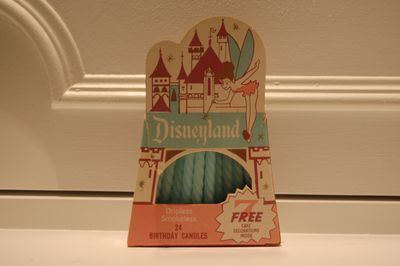 I believe I found these through GoAntiques.com. I’ve long been a subscriber to their alert service. Years ago when I found their site, I signed up for this service. I listed as my interests Disney and New York World’s Fair for me and I listed McCoy Pottery for my wife. Several times a month, I get an email alerting me to a newly added item in any of those categories. It’s nice because they do the searching for me. My wife and I have scored all sorts of additions to our collections from them.

I don’t have all that much stuff from Disneyland, so when something vintage comes up and it’s a curious little thing like this, I snap it up—especially when it’s a low price. I don’t think I paid more than $10 for these due to the slight damage you can see on the front cover: 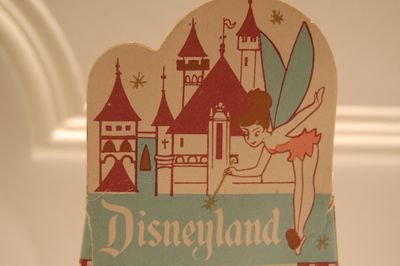 As I may have mentioned in previous articles, my wife, Diane, is a big Tinker Bell fan. Once I spotted Tink on the box, I knew I had to pick these up, plus I was curious what the cake decorations touted on the cover were all about. The GoAntiques photos only had the front cover.

The package arrived, and to my astonishment when I opened the box there were very small, but very cool cardboard cake decorations of 6 Disney characters and a much larger cardboard "Disneyland Castle," as it’s referred to on the back of the box. These decorations were in pristine condition and have never been used. They were a great surprise. I love the classic, vintage look of the characters very reminiscent of the vintage Disney storybooks that I have found from the 50’s and early 60’s. 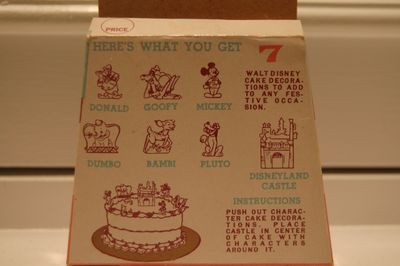 The back of the candle box featuring the cake decorations. Photo by Chris Barry.

Here are some close-ups of these wonderful decorations. As you can see, they have never been punched out and used. I'd like to find a way to do so and display them, but I also kind of like that they're in original condition. 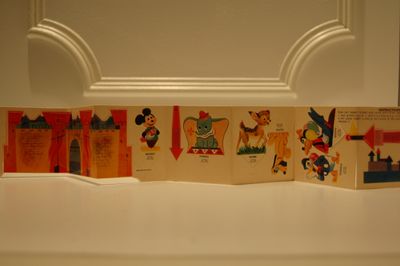 The castle and character cake decorations. Photo by Chris Barry. 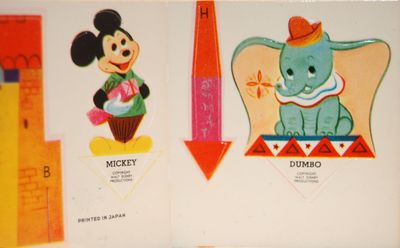 Mickey, Dumbo and two pieces of the castle. Photo by Chris Barry. 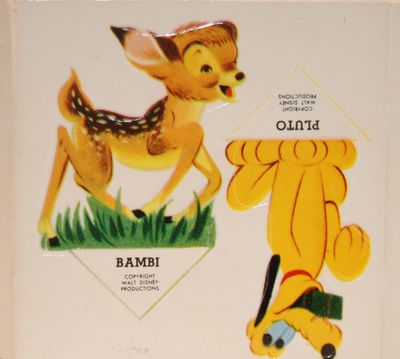 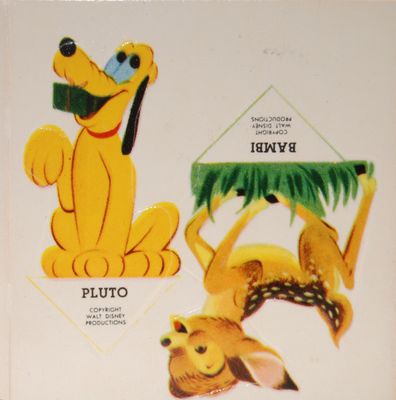 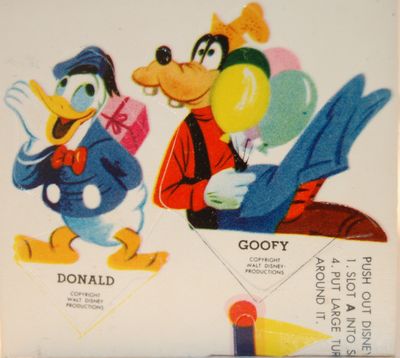 Donald, Goofy and a flag from the castle. Photo by Chris Barry.

When I tried to search the usual sources for some more information on these, I turned up empty-handed. Usually a little poking around on the Internet or some searching through my stack of Disney Collectible books will produce something, but these were nowhere to be found. I reached out to my buddy Barry Allender from Tomart’s Disneyana Update magazine and he shed a little light on these candles (Pun purely intended!) Apparently, Barry has spotted these at many Disneyana shows. They were produced in the late 50’s and early to mid 60’s. As far as he knows, despite the name, they were never actually sold at Disneyland. They were, however, sold in supermarkets, bakeries and craft stores and retailed for around 15 to 25 cents. Thanks to Barry, as always, for his bottomless well of Disneyana knowledge.

When you’re a Disney collector, or accumulator, there are certain things that we all tend to acquire. There’s always the obvious pins, clothing, figurines, plush characters and park souvenirs. I enjoy all of those things as well, but sometimes it’s these little curiosities that you stumble across that make you realize just how much Disney gets interwoven in people’s lives.

If these weren’t so old, and come to think of it, pretty flammable, I think I’d put these decorations on the kids next birthday cake or maybe even my own.

Instead, they’ll continue to occupy a small corner of my collectible shelf surrounded by all the other treasures and bits and pieces of Disney Stuff that continue to bring a smile to my face as I walk by.

Thanks for reading, drop me a line if you’ve ever seen these cool Disneyland candles and I’ll see you next time with more of that great Disney Stuff.