There are a lot of great things about writing for a place like MousePlanet. First of all, I thoroughly enjoy the writing. It’s a transformative moment in my day when I start to work on an article. I get lost in the process and it’s very satisfying. I also get to write about a subject that I love. The more that I write about Disney, the more I escape into that world, the more I keep the magic alive.

But really, the best thing about this whole experience is the people. It’s people that make up MousePlanet. The people that read, the people that take the time to respond and discuss the articles, the people that post on the MousePad are all a fascinating bunch of individuals. Knowing that I’m bringing a little bit more of that special Disney feeling into your day makes it all worthwhile.

Along with all of you, however, are the people behind the scenes at MousePlanet, a talented, diverse, interesting group of individuals working together to make it all happen. With that thought in mind, when I offered to write an article this Friday to fill in the new gap left behind by the already missed Steve Russo and the MousePlanet “powers-that-be” gave me the go-ahead, I wondered, “What exactly am I going to write?” I just wrote a “My Disney Top 5” article last week, so I’m due in my rotation for a “Disney Stuff” article.

But, something in my pixie dusted brain said, “Why not write something that fits this particular Friday on MousePlanet? Today is normally Steve Russo’s day and it’s the first “Steve Russo Friday” without a “That’s My Opinion” article in over three years. So, as Steve takes a much deserved break from writing and in honor of his three years and eighty articles here on MousePlanet, let’s salute my “other-Friday-guy” friend, MousePlaneteer and great writer, Steve, with my Top 5 Steve Russo MousePlanet Articles.

Steve and I certainly share the belief, as do many of you out there, that when it comes to Walt Disney World, it’s the small details that make all the difference. Steve hit the nail on the head with "It’s the Little Things" from August of 2009:

I’ve often said that some of the best times we’ve had at Disney World have come outside of the attractions; enjoying the ambiance and the little touches the Imagineers have placed there for our entertainment. Too often, we miss them entirely as we race past trying to get into the queue for the next ride. Sometimes, it’s just nice to take things a bit more slowly and try to enjoy all that the World has to offer.

Very true indeed and Steve’s list in this article sheds light on a whole bunch of “little things” like the Main Street windows in the Magic Kingdom, Miyuki the “Candy Lady” in the Japan pavilion at Epcot, De Vine at Animal Kingdom, looking up in the elevator on the Tower of Terror at Hollywood Studios (I still haven’t gotten this one?) and these horrifying but interesting chairs in the Boardwalk lobby. 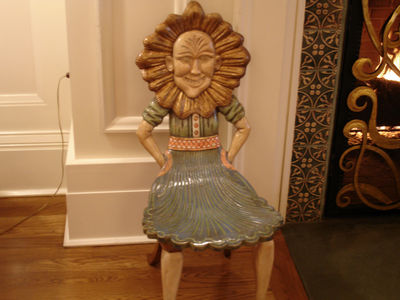 It’s an interesting story, but these chairs still creep me out. Photo by Steve Russo.

“Comedy is hard.” Many people have that quote attributed to them. No matter who actually said it, it’s a spot on statement. With "Back to the Future" Steve showed his sarcastic comedy chops in this article as he projects ahead and “predicts” future Disney events like the day that Cinderella’s Castle is converted into million dollar condominiums… 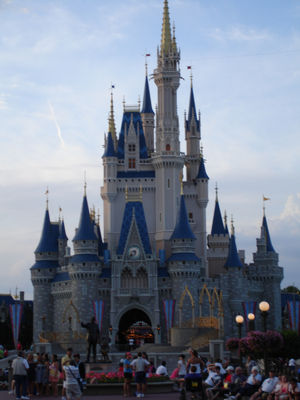 …and Disney’s new airport shuttle service, Disney’s Fantastical Express, that utilizes Disney’s Hyper-Suction which will “whisk guests via a vacuum tube” to any resort on Disney property. Nice.

"Park Peeves" came to be known as one of Steve’s signature articles. It turned into an annual occurrence. Four installments ran over his tenure here at MousePlanet. This first installment placed a name with all those annoying park-goers that we all know and “love” such as The Dead Stoppers, Wide Walkers, Line Cutters, Seat Savers, Moochers, Center Stoppers and The Menu-ally challenged or Procrastin-eaters.

Steve writes an opinion column and one thing that exists out here in Disney cyberspace is opinions. Steve’s opinions are always well thought-out and well documented. His "Overrated/Underrated" series was no different. He’s “been there and done that” when it comes to Walt Disney World and one of the things that people are looking for when they come to a place like MousePlanet are writers with informed opinions. I enjoyed this series and agreed and disagreed with many of his choices. That’s how you learn about a place as massive as Walt Disney World, by checking out articles like this and then formulating your own opinions. You have to respect a Disney fan that says that Le Cellier in Epcot is overrated. I still haven’t been there so I can’t comment, but getting a reservation here is near impossible. Hearing an experienced Disney traveler like Steve say that it’s overrated makes me feel like I’m not missing that much. Hearing him say that The Country Bear Jamboree is underrated shows me that he has a soft spot and an understanding of the classic simplicity of this attraction. 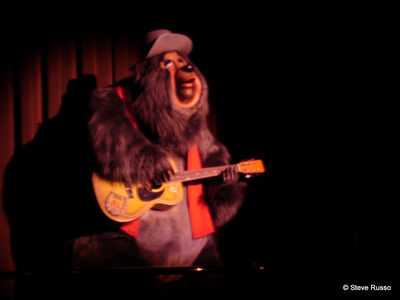 I appreciated serving as Steve’s inspiration for his "Bucket List" article. I wrote an article in July of ’09 entitled the "Top 5 Things I Have Yet to Experience at Walt Disney World." I know he couldn’t believe that I still hadn’t made it on Test Track. (I finally did last spring!) But, Steve had a few surprising ones himself, like The Crystal Palace and the Astro Orbiter. We shared many other “still haven’t” things like Victoria and Albert’s, Mickey’s Backyard BBQ and Summit Plummet at Blizzard Beach. It just reinforces the notion that you can go to Disney over and over again and still not get to see or do everything. By the way Steve, I’m with you on the Luau at the Polynesian. No thanks. 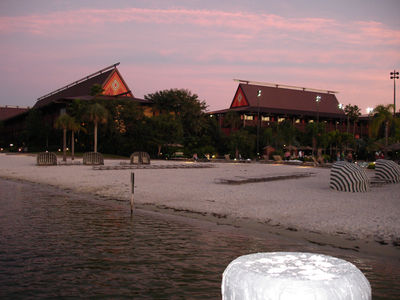 I love the Polynesian Resort...but not the Luau. Photo by Steve Russo.

As a reader of MousePlanet I enjoyed Steve’s opinions and the discussions that they sparked. As a writer and a colleague, I appreciated his articles and his kind comments about my work. I’m glad that I could combine what I do and what he does in this Top 5.

I wish him all the best on his future magical journeys and maybe we’ll finally meet up for a Dole Whip in Adventureland someday.