Welcome back to another installment of Disney Stuff. One of the great things about being a Disney fan and a collector is that people give you things to add to your collections and accumulations of stuff. At least they do that for me; I can’t speak for all of you out there. How many times have I heard from a friend, “Hey, I know you’re a Disney fan. I came across these and thought you’d get a kick out of them.” Luckily, it happens to me quite a bit. I’ve gotten some cool things that way. Of course, it rarely happens from other Disney fans because other Disney fans hold onto their Disney stuff. At any rate, I can never refuse a freebie— and why should I?

Recently my best friend Lou came across some stuff that made him think of me while cleaning out his grandmother’s house. Sometimes it’s just unbelievable what you come across and where and how perfectly it relates to another individual. Case in point here: as Lou is sorting through odds and ends he comes across three things in particular that really suit me. Nothing major. No ultra rare Antiques Roadshow finds. (Of course not; that never seems to happen to me.) Two of the items fit me and fit in his grandmother’s basement. The third one has left us both scratching our heads.

He approached me with a bag on a recent visit and said, “You’ll never guess what I found all together in my grandmother’s basement.”

The first item, which I’ll get to in a few moments, is a vintage Walt Disney World guidebook. The next was a map of the 1964-1965 New York World’s Fair, one of the other great collections in my life. It made sense that these items would be in someone’s home of that age. However, it was the vintage Grateful Dead LP that he also found alongside the other items that surprised us both! Not what you’d expect from a grandma, and Lou has no explanation. Considering all three items directly relate to me, Lou knew he had to hand them over and I was thrilled that he did.

The Dead and The World’s Fair aside, it was the Walt Disney World guidebook that really got me happy and it’s the piece of stuff that I’d like to feature today. I’m not a big ephemera collector, but I do like to read old paper and printed items especially when they shed a little light on something I’m interested in or passionate about. I wasn’t at Walt Disney World in the old days, so I’m always curious to see what things were like, what rides or attractions were open when, and how the company was advertising them. It helps you gain a deeper appreciation for the place when you know its history.

So, let’s take a look inside “Your Complete Guide to Walt Disney World.” 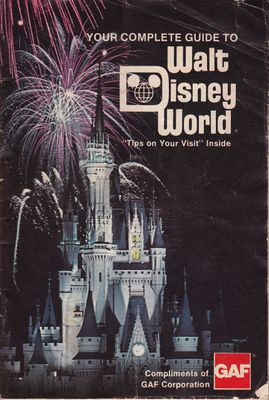 The front cover of the guidebook. © Walt Disney Productions.

First of all, take note of the name GAF on the cover. This guidebook was “compliments of GAF Corporation.” Many of us out there might not remember GAF film, but at this time it was the official film of Disneyland and Walt Disney World. I fondly remember my Disney GAF View-Master. As a matter of fact, I think I had the exact one pictured here on the back cover. 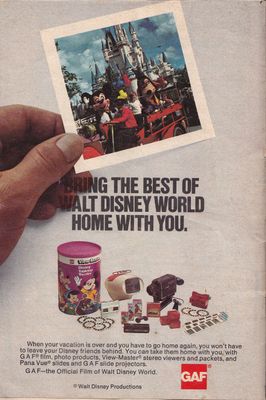 The back cover of the guidebook. © Walt Disney Productions.

This book is dated 1977 so, Walt Disney World was probably only 6 or 7 years old when this book was in use. I’ve always been fond of the old globe and mouse ears Disney logo shown on the front cover, but it’s the inside of the guidebook that I really like. Let’s take a closer look at what Walt Disney World was all about 34 years ago.

I know nothing of the Motor Coach transportation system referred to on page two. How many of you out there remember taking the RED line, which ran between the Transportation and Ticket Center and Walt Disney World Shopping Village. What about the GOLD line, which ran between the Contemporary Resort, the Transportation and Ticket Center and the Polynesian Village. Considering how few places there were to go at that time, it’s amazing to see 6 different bus lines listed on property. 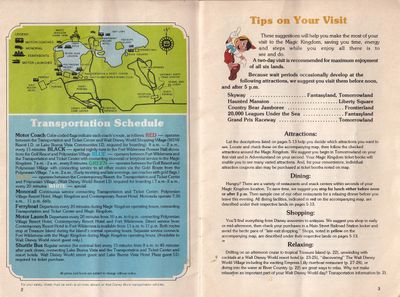 Transportation and Tips on Your Visit. © Walt Disney Productions.

I love the fact that the Country Bear Jamboree is listed here as an attraction that occasionally develops a wait period and you’d better hit it before noon or after five. 1977 was a simpler time, wasn’t it.

It’s nice to see that Walt Disney World was paying attention to guests with special needs back then. There’s a whole page dedicated to guests in wheelchairs. I can only surmise that Disney was ahead of their time at this point in time when compared to other destinations. 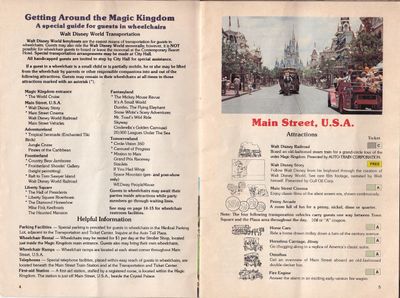 The Main Street, U.S.A attractions haven’t changed all that much aside from the loss of the Walt Disney Story and the Penny Arcade.

I'm quite sure I've never seen the stores listed on this next page. When’s the last time you were in the Tobacconist, the House of Magic or the Greenhouse? 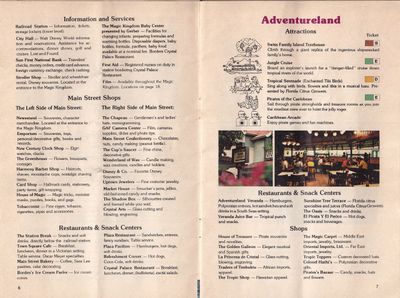 Adventureland hasn’t changed very much. I don’t recall the Caribbean Arcade, but I am looking forward to the possible return of Tropical Serenade or something like it this summer.

There’s definitely no Splash or Big Thunder Mountains in Frontierland at this time, but there was Davy Crockett’s Explorer Canoes. 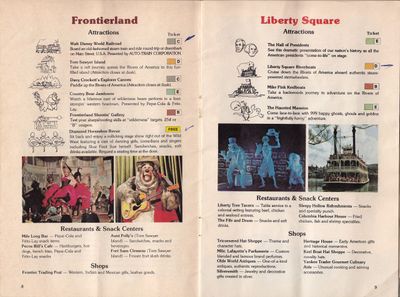 Liberty Square is largely the same minus the Mike Fink Keelboats.

In Fantasyland you could’ve experienced a submarine ride, the Skyway, The Mickey Mouse Revue and of course, Mr. Toad. 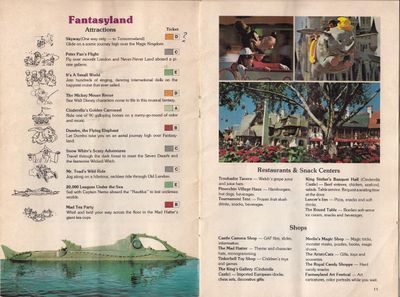 Space Mountain, The Carousel of Progress and the PeopleMover are still in Tomorrowland. Everything else is either gone or has a different name. 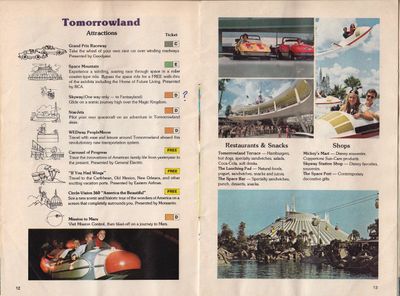 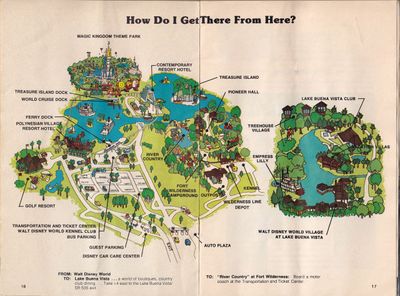 This was everything in 1977. © Walt Disney Productions. 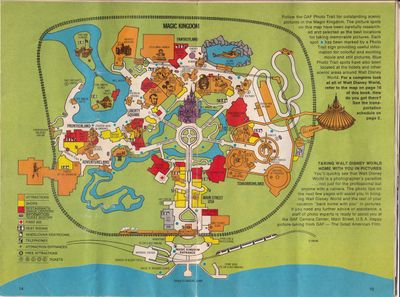 The GAF Photo Tips are a hoot especially the couple on the right. I can’t decide if these are Cast Members or if this gentleman is actually wearing a suit to the Magic Kingdom. 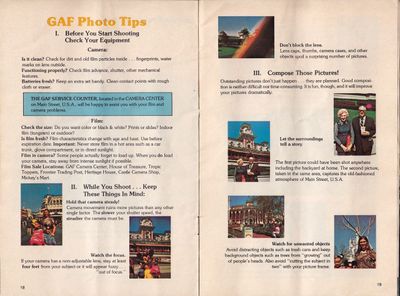 So many questions arise when looking at this book. What was the World Cruise to Treasure Island like? I wonder what the Polynesian Village Resort Hotel was like with only 500 rooms? 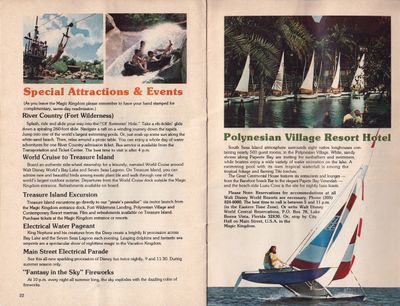 Was there really a roving violin player at The Top of the World supper club in the Contemporary Resort Hotel as shown here? And what were the other 10 restaurants? 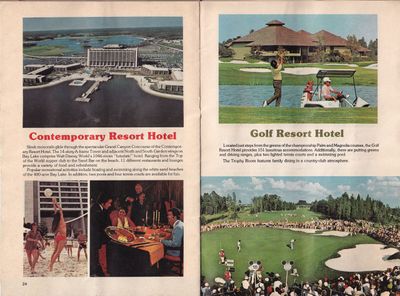 The Golf Resort Hotel is now… Shades of Green, of course. Before that it was…The Disney Inn.

I’m not such a big Downtown Disney fan. I get the feeling that I may have liked the Walt Disney World Village a bit more. Something tells me that a sandwich and a beer from Heidelberger’s Deli followed by a trip to Toys Fantastique for some handmade European toys or Von Otto’s Antiques would be a real treat compared to modern options like Planet Hollywood and yet another Disney gift shop. 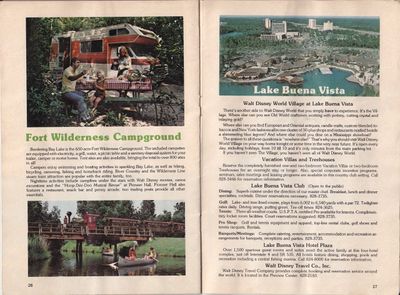 The back cover did inspire some memories though. I think I remember seeing these movies as a double feature that summer at the Westbury Drive-In here on Long Island. 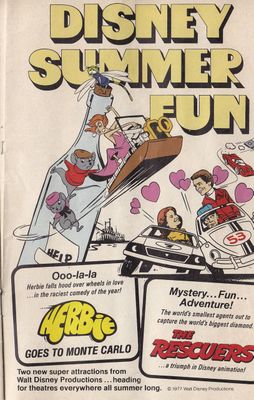 An ad on the back inside cover. © Walt Disney Productions.

So, as you can see, a simple little booklet like this can shed a whole lot of light on Walt Disney World’s past. It also lets you look at the current amazing World that we all know and love. You begin to wonder, “Am I happier with all the other choices I have now or do I long for the simpler days exhibited in this guidebook?”

As someone who missed out on many of the things in this book…that’s a tough one. I love and adore the Walt Disney World of today, the one that I’ll be happily wandering through this summer with my family.

But, there’s a part of me that wants to go back and see what it was like when one of my biggest concerns would have been the line to get into The Country Bears. Perhaps it was a kinder, gentler Walt Disney World? Maybe, but that’s impossible to find out isn’t it? I’m fortunate though to have this little piece of Disney Stuff to give me a glimpse into the past.

Thanks to Lou for digging this little piece of history up and, especially, to his grandmother for saving it. If only we had an answer to the Grateful Dead album.

Thanks for reading and I’ll see you next time with some more of that great Disney Stuff.