An Ode to Typhoon Lagoon

"A furious storm once roared 'cross the sea,
Catching ships in its path, hopeless to flee.
Instead of a certain and watery doom,
The winds swept them here to Typhoon Lagoon."

Already much of the summer has passed by, and I haven’t taken the time to talk about my favorite water park in the world: Typhoon Lagoon. I could write a half-dozen articles about the wonders of this park, I can't believe I put it off. I’ve been wanting to talk about Typhoon Lagoon for some time. I don’t think it gets enough press, even though it is rated as the No. 1 water park in attendance—even ahead of Blizzard Beach, which I must admit not only has the best slides but is perhaps one of the most creative concepts every concocted by Disney Imagineers.

But Typhoon Lagoon is different, and it surprises me that more time isn't dedicated in the Disney fan sites toward both her and her sister Blizzard Beach. I especially believe it's one of the places people actually get a "vacation from their vacation" while staying at the Walt Disney World Resort. People talk about Castaway Cay having that same effect when they go on a Disney Cruise Line vacation out of Port Canaveral. But I tell you, despite the beautiful, natural features of Castaway Cay, this is truly the most lush, most intensely themed, most exotic-type experiences—far beyond any Adventureland, Disney's Animal Kingdom, Disney's Polynesian Resort, and yes, even Castaway Cay.

My first visit came not too long after it opened. 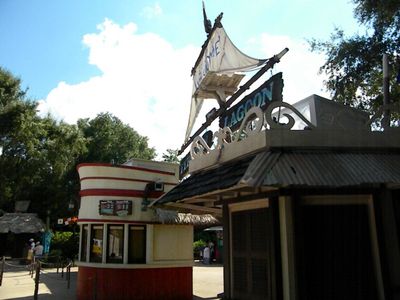 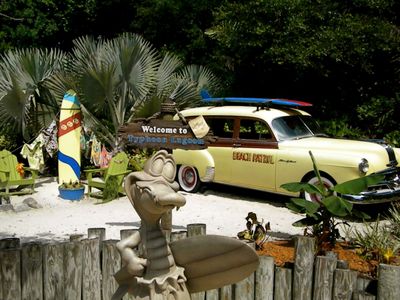 A sand sculpture of Lagoona Gator in the foreground. One of the first photo spots as you enter the park. Photo by J. Jeff Kober. 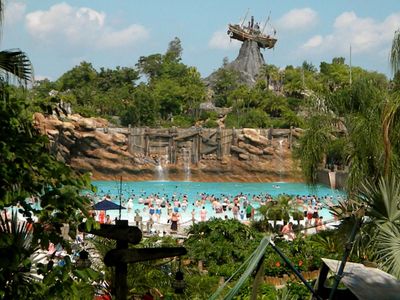 It's at this point you first realize that you have truly discovered some place special. Photo by J. Jeff Kober.

Like any great theme park, you have great establishing shots, but also great close-ups as well. And Typhoon Lagoon delivers. The theming is so creative and it is fun to discover how the winds of the typhoon had shaped almost everything about this place. 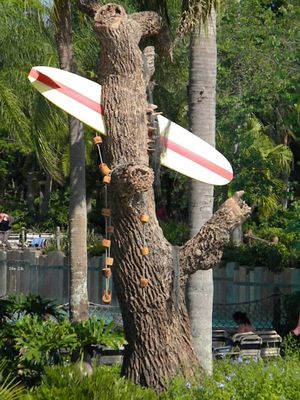 The theming continually plays out the story of a typhoon wreaking havoc on a formerly pristine paradise. Photo by J. Jeff Kober.

One of the wonderful things I experienced that day was grabbing one of the few hammocks they had scattered around and just taking a nice long nap. Sad to say, the hammocks are long gone (I can only imagine the war of guests trying to get into the few that were available), but I left with the experience feeling completely refreshed, something I never felt while herding through the other parks from rope drop to fireworks.

It would be several years before I returned, and what surprised me when I did was how the vegetation had grown up! It was so lush, and so tropical—I really felt that I was in a different world. I still feel that today, even though during my years as a Disney cast member I will confess that entering and moving about backstage was one of the saddest experiences of being in any Disney park. The magic that is Typhoon Lagoon literally melts away to asphalt and office trailers. And I mean melt! In the middle of summer it literally seems ten degrees warmer backstage than it is onstage.

There's so much to enjoy at Typhoon Lagoon, even if you're not that big on swimming. Of course not swimming at Typhoon Lagoon would be akin to walking around the Magic Kingdom and never going on a ride. But it can be enjoyed. Stop by Singapore Sal's, grab some shades and a little sunblock, and then head out for a tour. 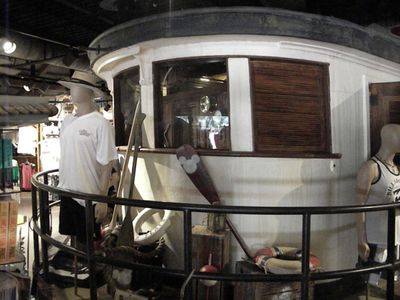 Inside Singapore Sal's gift shop is this ship's helm. It doubles as a dressing room. Photo by J. Jeff Kober. 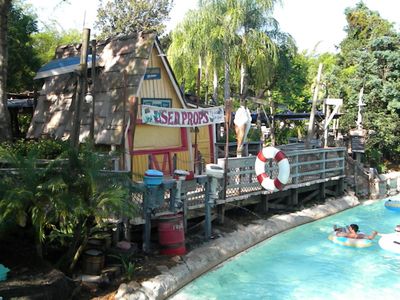 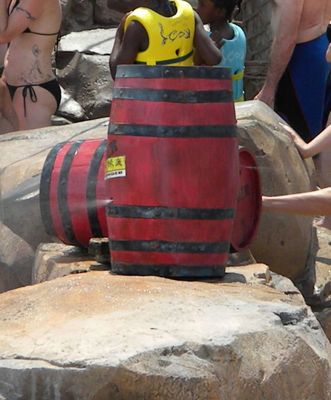 Barrels from the Fireworks Factory cool guests in the queue for Gang Plank Falls. Photo by J. Jeff Kober. 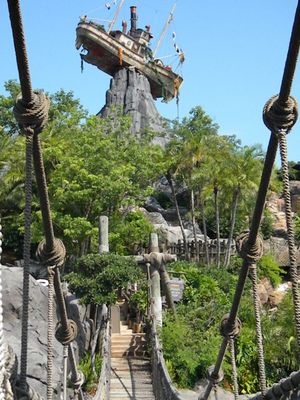 One of the true gems of this place is the rope bridge and trails that take you up to Mount Mayday. Photo by J. Jeff Kober. 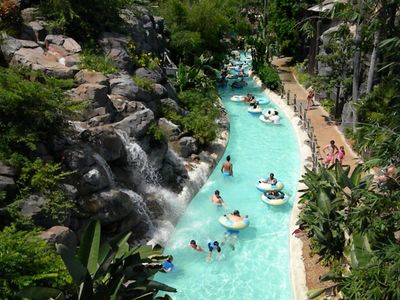 Looking below to Castaway Creek—this must be paradise! Photo by J. Jeff Kober.

Did I forget to mention the Wave Pool? Amazing. I would say, and considered the largest outdoor wave pool in the world. Sun City, a major resort destination in South Africa, used the same technology to replicate the wave pool experience. And they have some terrific theming. But it still isn't Typhoon Lagoon. Here you can take specialized surf lessons prior to park opening. There are only 12 guests per class, but you're guaranteed the perfect wave. It's a definite for those who are trying to find something their teenagers could enjoy at Walt Disney World. 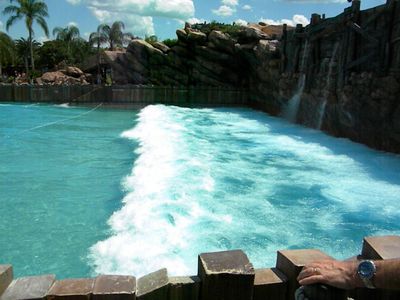 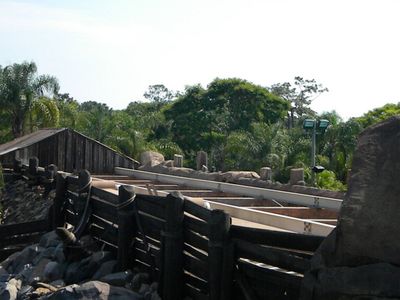 Think of it like a series of very big toilets lined up next to each other all being flushed at a time. That's how you get the waves at Typhoon Lagoon. Photo by J. Jeff Kober. 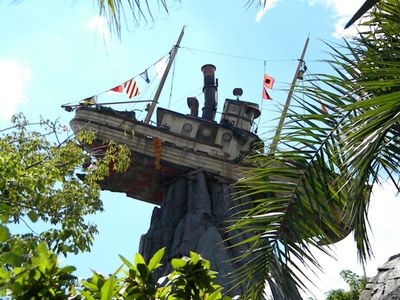 The "wienie at the end of the stick," Miss Tilly. Photo by J. Jeff Kober. 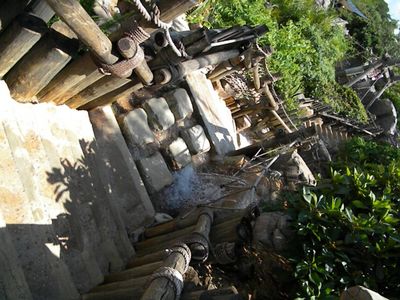 Following the paths along Mount Mayday, one finds these foot bridges over the flowing streams coming down from the top of the mountain. Photo by J. Jeff Kober. 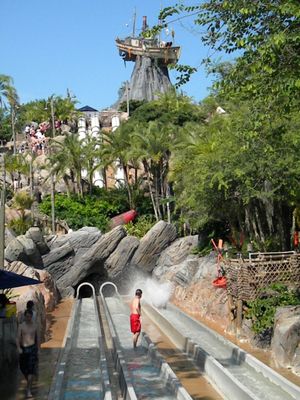 Humunga Kowabunga is little more than half the size of Summit Plummet at Blizzard Beach, but it's still plenty of fun. Photo by J. Jeff Kober. 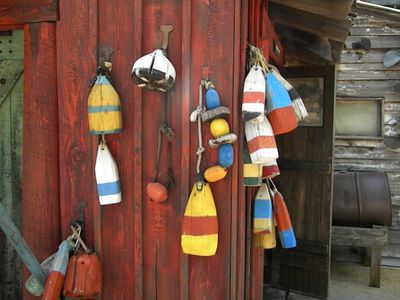 Behind this fishing barn lies a break room for guards. Theme follows function. But what theming! Photo by J. Jeff Kober.

Another favorite is Shark Reef. Built around a sunken tanker, you get the chance to have a face-to-face encounter with plenty of fish, including a few sharks. Snorkeling gear is provided free, and, for a surcharge, you can do an S.A.S. Adventure. It's known as Surface Air Snorkeling, which involves a "pony" tank and a small regulator typically used in SCUBA diving. The downside is that now half of the reef is taken up with this program, making the complimentary portion a much longer wait. So consider doing the latter much earlier in the day or toward the end of the day. 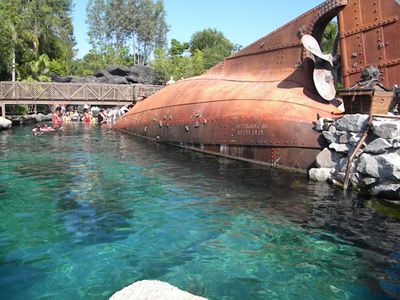 And if you don't care for either, then take a walk down the sunken tanker and enjoy watching the others as they snorkel away among the sea life. 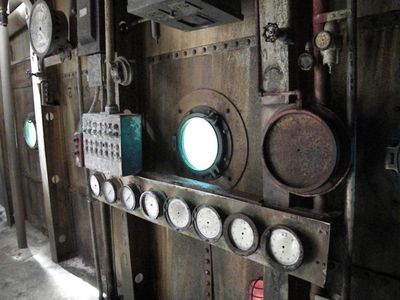 The interior detail amidst portholes looking below Shark's Reef of a ship turned upside down. It's just another of the many ways guests who don't do water slides still enjoy the park experience. Photo by J. Jeff Kober.

A few years ago, the park added section called "Out of the Way Cay" which includes a major feature in the way of Crush 'n' Gusher, a multirider, set of three coaster-like slides that send you up and down before finally splashing down in a tranquil pool (some of you might know it as the AquaDuck on the Disney Dream). But they created Disney's first one here at Typhoon Lagoon, so if you hadn't planned on doing the cruise, the good news is that you can enjoy the slide here. Disney waited 10 years for the technology rights to be available from a competing water park  to allow them to create this. The slide experience is great, and, if you don't do slides, just enjoy the tranquil pool at the foot of the slide tower. It's a nice change from the wave pool scene. 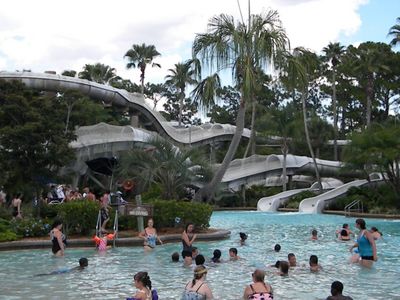 Crush 'n Gusher is as thrilling a ride experience as just about any flume attraction. Photo by J. Jeff Kober

The theming is quite good here, but much of it is missed if you don't look carefully enough. The other downside is that the perimeter fence is a cyclone fence. Not that what's behind it is bad--just natural Florida. But it doesn't contribute to the otherwise perfect landscaping and theming. 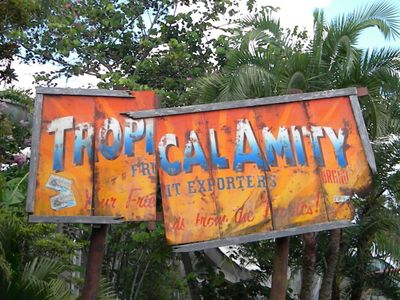 An example of some of the great thematic signage in the park. Photo by J. Jeff Kober. 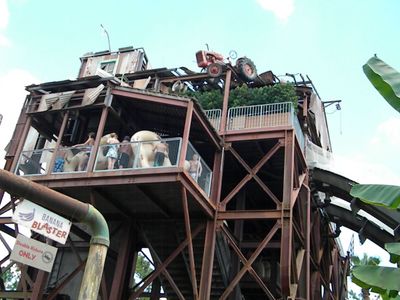 It's easy to miss some of the theming in this corner of the park. Such is the case with the tractor on top of this water slide. It's hard to see approaching the pool from the entrance. And carrying a tube you wouldn't necessarily look up to see it hanging over you. Photo by J. Jeff Kober. 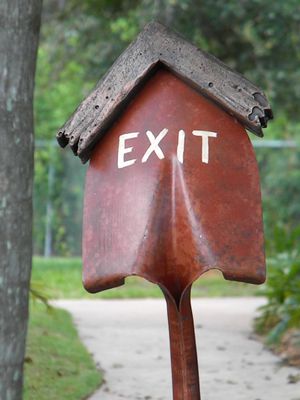 Clever theming in a simple directional sign. Note the chain link fence in the back. Photo by J. Jeff Kober.

Again, I could go on and on about this place. Most people never see the water parks because it's an add on. I'm an annual passholder, so I don't appreciate fully the decision making behind buying Magic Your Way Tickets. But looking at the pricing, if I was staying several days at the Walt Disney World Resort, I would get more value from a Water Park Fun & More option than I would wasting my time (and you really do) with the Park Hopper option.

But you tell me? Do you visit the water parks? Do you get the value from the experience? Would you do it over paying for the Park Hopper option? Let us know your thoughts on taking time out to visit the Disney water parks.