On today's show, Mark fills us in on his experiences at the D23 Expo in Anaheim last month.

Meet Mark this fall in Florida!

Do you want to meet Walt Disney World Resort Update editor Mark Goldhaber, but can't make it to the D23 Expo in California this week? Fear not, there's a fun event coming to Walt Disney World this fall. Join Mark on Sunday, November 13, at 4 p.m. through park closing for the Big Bad Voodoo Food-Do To-Do.

We'll wander the last day of the Epcot International Food & Wine Festival, sampling cuisines from around the world, taking pauses to watch each of the three performances by Big Bad Voodoo Daddy (one of Mark's favorite groups) at 5:15, 6:30, and 7:45 p.m. on the final day of the Eat to the Beat concert series. After the last performance, we'll get one last snack, secure some international desserts, and then find a place to enjoy the evening's performance of Illuminations.

You can RSVP on Plancast, or by email. You can also just show up, but if Mark can snag some swag from the MouseAdventure goodie bag, he'll want to have enough for you! We'll select a starting point for our adventure in another month or so, so watch the Plancast plan or this page for that information. You can also follow @MPMark on Twitter for updates on November 13 if you want to join the group later on in the day.

This week's show was published over a week late due to technical and staffing issues that cropped up during post-production. We'll return to our every-other-week schedule, with our next show planned for September 20.

Mark noted that the previous show was scheduled to be released on the fifth anniversary of the first Magical Moment Podcast, so Mark and Mike have been podcasting together for five years. Including 37 Magical Moment podcasts, 434 MouseStation podcasts, 33 separate MousePlanetWatch episodes, and 7 out-of-band specials or bonus audio, they've done 511 shows together. Yes, it scares them as much as it scares you.

Mark also wished Mike and Kayle a happy second anniversary, which was the day before this show was scheduled to be published.

Mark fills us in on his experiences at the D23 Expo in Anaheim last month.

Mark set the scene with describing the MousePlanet LOUNGE and talking about all of the readers and listeners he met while he was staffing the LOUNGE. It was great to meet all of the listeners, and it was especially great that there were as many podcast listeners visiting as there were readers of the WDW Update.

After giving an overview of what the show floor was like, Mark got into the presentations that he got to attend.

Mark talked a little about the Disney Legends induction ceremony, which opened the official events for the Expo. For more info, you can check out the story that he wrote about it that was published last Friday.

Next up was the Parks & Resorts presentation, which was somewhat disappointing, as there was a little more information about projects that we already knew about, but nothing at all about new projects. Not only was there nothing said about the Grand Floridian Villas, where construction is just getting underway, but there wasn't even a mention of the under-construction of the Disney Fantasy cruise ship.

The first 4-1/2 minutes of Wreck-It Ralph were seen, as well as new footage from Planes and an exclusive viewing of a scene from Brave (that they asked us not to talk about to keep it a secret until the movie is released). There was also new footage from The Avengers, John Carter, The Odd Life of Timothy Green, and other upcoming movies. Star appearances included the cast of The Avengers (including Robert Downey, Jr. and Scarlett Johansen), Jon Cryer from Planes, Jennifer Garner of The Odd Life of Timothy Green, and more. Everyone at the presentation left with a cupcake, as thousands of the little cakes were distributed to celebrate the 25th anniverary of Pixar Animation Studios (the cupcakes were decorated with a Pixar star ball motif).

The second panel was called The Imagineering Guide to Creativity and Innovation. That session featured a number of different Imagineers from different disciplines talking about how they became Imagineers, how the teams that they work on actually function, and a general look at Imagineering. To some extent, it seemed almost like a recruitment session for Imagineering.

Day Three led off with a session on Imagineering the Dream and the Fantasy. Most of the Disney Cruise Line information had already been released in one form or another, but there were new little tidbits about the Fantasy here and there.

After the DCL presentation, Mark checked out the KINECT: Disneyland Adventures demonstration, along with Brian Curran of EndorExpress.net. This game might convince Mark to spend the money to buy an XBOX KINECT to be able to play this game (and its possible sequels). We'll have more of that session on the show in four weeks. 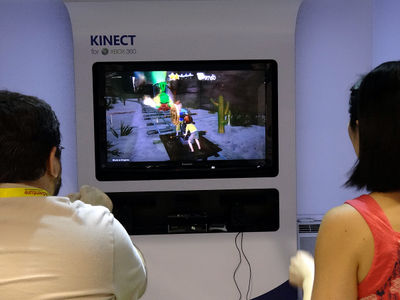 Mark and Microsoft's Jennifer Yi pump their hand cart to back away from the ghost train while playing the Big Thunder Mountain Railroad game on KINECT: Disneyland Adventures. Photo by Brian Curran.

A session on Carsland showed some interesting footage of the construction site, and some great stories behind the design. One of the unexpected topics was the announcement of the John of the Jungle contest from John Lasseter to find photos of John as a Jungle Cruise skipper years ago.

The final presentation that Mark covered was the Star Tours session presented by Tom Fitzgerald, where Tom revealed some old stories about the attraction and a lot of information about how the redesign of the attraction happened, including the various changes of ride sequences.

Mark talked a bit about finally getting to meet Steven Ng and Mark Silverman.

Mark announced a contest to give away two extra D23 Expo Guidebooks and six D23 Expo hand fans. Each Tip of the Week, Magical Moment, or Ask the Kid question that you submit will get you one entry, with a bonus second entry if you submit it on the voicemail line. Since the show was published late, we'll give you until September 24 to submit your entry, and the winners will be announced on the October 4 show.

Let us know which attractions should be updated, replaced, or changed back!

The show was running very long, so we skipped the Magical Moment and Listener Feedback that we originally had scheduled for this week.

Thanks to our announcer, Andrew Rich, and to our sound editor and audio engineer, James Granger!