The fall season is upon us again, and that means time for Mickey's Not So Scary Halloween Party, occurring on select nights in September and October. If you've never been to one before, this will give you a taste of what to expect. If you've been before, you might be curious about how it compares to years before. 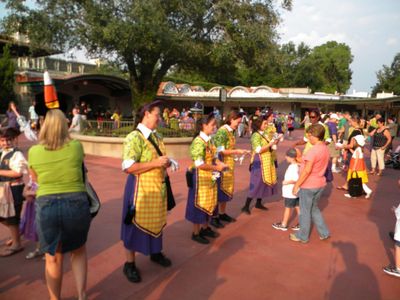 Greeting guests arriving at the Magic Kingdom with wristbands for the night's festivities. Photo by J. Jeff Kober.

For first-timers to this event, what is most striking is how much Main Street, U.S.A. becomes transformed to a fall festival. Specialty pumpkins are found carved along the streets, as well as some very popular members of the town in the form of scarecrows. 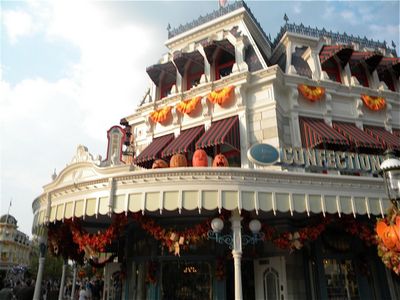 For veteran visitors, you'll notice that the fall theming now seems to be throughout much of Liberty Square, and even in sections of Frontierland. It feels more like autumn in these locations. There are no special lights or decorations, just lots of beautiful fall leaves and garden pumpkins. 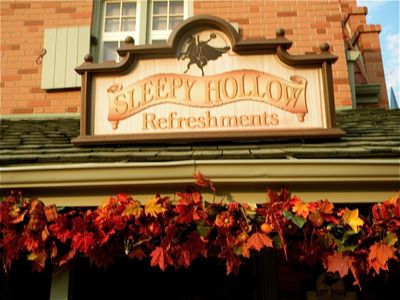 Of course, the event of the evening is trick-or-treating. There were many places in the park to grab a handful of candy. Cast members share lots of candy, and what you receive varies in many places. Most noticeably missing is the trick-or-treat station they've previously set up as the Alice In Wonderland trail, between Mickey's Toon Town Fair and Tomorrowland. In its place is Brer Rabbit's Laughin' Place Candy Patch. Actually, doing it it here seems to make more sense than an Alice theme adjacent to the Tomorrowland Speedway. It just looked like a perfect location, utilizing the overflow queue. Decorations depicting the Bre'r characters were all around. And I appreciated the air conditioning from the barrels since the summer heat is still out in Florida. But there are fewer stations for getting candy at the new location compared to Wonderland, and there had already been such a trail along the Splash Mountain queue the year before. 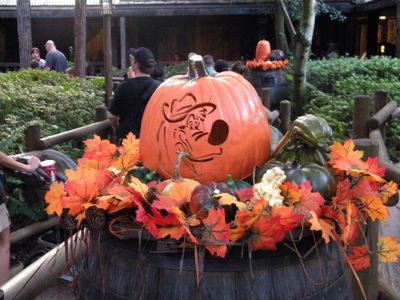 Another location, Trader Sam's in front of the Jungle Cruise, showed more promise with new, additional theming, but was simply a one-stop candy shop. That could be much, much more. 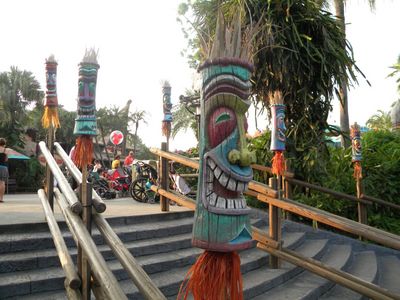 Nothing like being all decked out for a party in Adventureland and no real place to go. Photo by J. Jeff Kober.

Also new was a trick-or-treat stop themed to The Princess and the Frog. That queue weaved down the ramp to the lower riverboat dock for candy. But it seemed that a band and character experience could have been happening on the upper levels. It seemed an ideal location for playing a big part in the party. 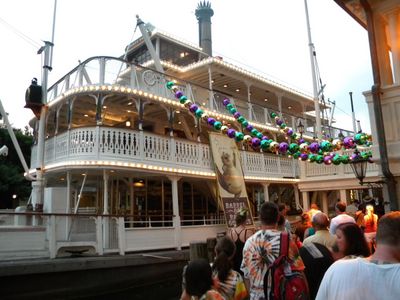 Werther's Originals handed out caramels in Fantasyland, and Kellogs handed out Toy Story gummy chews in the Tomorrowland Terrace Restaurant. There are a few places that aren't on the map that are often quick places to grab candy. Check out the park's exit at the end of the evening, Stitch's Great Escape, and The Diamond Horseshoe, where Woody's Happy Harvest Roundup is happening with Jessie, Bullseye, and Woody.

Of course the star of any Halloween event is the Haunted Mansion. With its newly added enhancements to the cemetery, fresh lighting, goulish-looking cast member hosts, and even a spirit or two in the yard greeting guests, it was definitely the place to be for such an event as this. 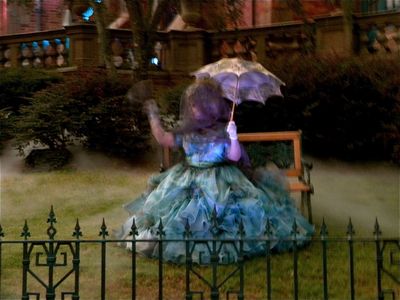 This Southern Spirit greeted guests while queuing for the Haunted Mansion. Photo by J. Jeff Kober. 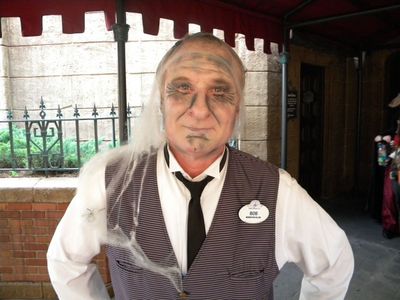 The hosts of the Haunted Mansion had the very "grave" assignment of being made up into "Ghost Hosts" themselves. Photo by J. Jeff Kober.

New this year is the Villain's Dance Mix & Mingle in front of Cinderella Castle, and it's being well-received. This all-new Halloween production, hosted by Dr. Facilier, is quite humorous, well-choreographed, with nice effects. Be sure to catch the Queen of Hearts, who struts her own thing while characters are getting in place for their character meet-and-greets. Even Lady Gaga couldn't quite match her royalty. 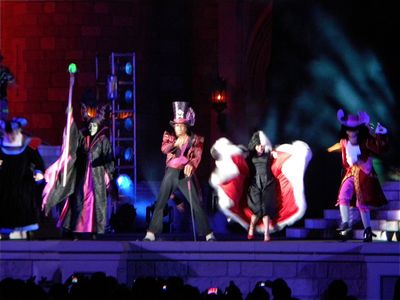 Dr. Facilier conjures up villains from the other side. Photo by J. Jeff Kober.

The parade is great, with all your favorite Disney characters. It begins with the Headless Horseman's ride through the street, a favorite of my son. If you've read my other articles, you would not be surprised to know that he was as giddy about seeing the Headless Horseman as other children are about their presents on Christmas morning. We saw the parade twice, and recommend the second showing, since you can see the parade right on the curb without waiting beforehand. The choreography of the dancers in the parade is better than most of the other parades. Hats off to the Haunted Mansion dancers and to the square dancers, who were sweatin' up a storm. It's a great parade, perhaps my favorite of all the current Disney parades at Walt Disney World, with the exception of the Main Street Electrical Parade.

If you want a more one-on-one moment with the characters, you'll find those as well. They are located throughout the park. Many characters appear that you can't experience otherwise. And many of your favorites are decked out in special Halloween costumes. If you love Disney characters, this is the night to experience it. 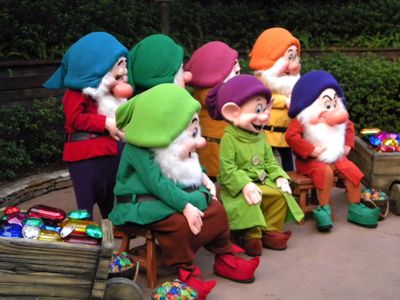 Perhaps the most popular meet-and-greet experience of the evening, a chance to have a photo with all the Seven Dwarfs. Photo by J. Jeff Kober.

Add fireworks to the whole mix, and you've got a great evening. Or so you'd think. There were only a few real disappointments, but they were of a major caliber: First, many attractions were not operating at the Magic Kingdom. I can accept not having Hall of Presidents open. But the Walt Disney World Railroad, the Enchanted Tiki Room, Country Bear Jamboree, and Liberty Square Riverboat were closed. Given that other attractions are not open after sunset (Tom Sawyer's Island, which you could do a cool event with a little effort), no longer open (Mickey's Toon Town) and under remodeling (Swiss Family Treehouse), that was a real downer. To top it off, even the Jungle Cruise wasn't open. That was hugely disappointing.

Worst of all, when we walked out of the Magic Kingdom after it was over, we found that the park's monorail system was not working for after-hours events—what a real mess. That the resort monorail offered service was hardly a solution. Fortunately, there were few attending this first of many after-hours Halloween events, but I would have really hated leaving Magic Kingdom after the fireworks on a busier night. I don't know whether the night I attended was merely an exception or it was a new policy, but not having monorails running is a real red flag to potentially disappointing a lot of tired guests.

Then finally, if all that wasn't a kick in the pants, when we got to the tram loading station at the TTC, some cast member had candies there, and started handing them out to guests boarded on the tram—row by row. It's a nice gesture, but passing candy one row at a time meant we wound up sitting in the tram for 15 minutes, while another tram waited behind us. I can't even imagine how it must have felt for those guests who were still standing on the platform waiting for candy distribution while they saw the empty tram waiting behind us. How hard would it have been for the cast members to simply give out candy to those waiting in the queue?

So in some ways Mickey's Not So Scary Halloween Party is both a treat—as well as being tricky. 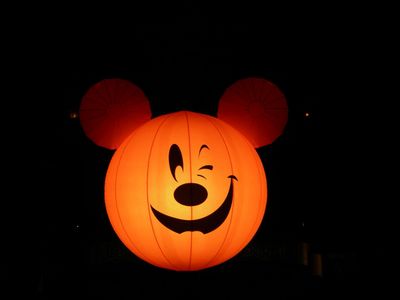 Trick? Or Treat? You decide. Photo by J. Jeff Kober.

How about you. Did you attend this year? What do you think? Share your thoughts with us!