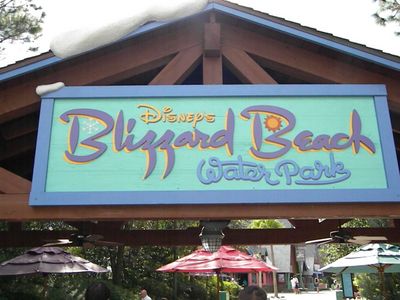 Disney's Blizzard Beach reopened this week after its annual refurbishing. The weather most days is great—so it is a good time to visit. If you haven't been before, you are missing a great treat. Blizzard Beach rivals only Typhoon Lagoon as the greatest water park ever. I could tell that was the case long before it opened. My former boss at Water Mania helped open Typhoon Lagoon, and was invited by Imagineers and operators to visit Blizzard Beach for a tour. Water Mania's owner had no interest—but I jumped at the chance. We drove to a backstage location and headed into a trailer to get our hard hats. There on a wall was a huge map of the proposed park. Wow! It was amazing. I remember walking up the mountain when it was more dirt than rock and snow. But I could tell it was going to be a fantastic experience when it opened.

Nearly 17 years later, Disney's Blizzard Beach is still a fantastic park. You don't have to love swimming to appreciate the attention to detail in creating what would be Disney's first "ski resort." Let's take a look around and I'll show you what I mean. 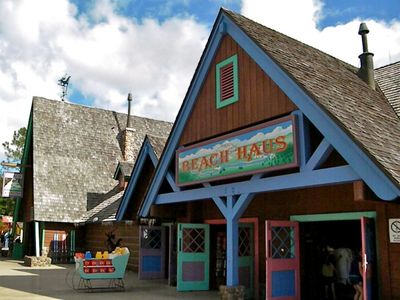 Sand and Swiss are implicit in the title of this retail operation. Photo by J. Jeff Kober.

After you enter the park, you come to a small alpine village. Beach Haus offers a terrific selection of swimsuits, towels, sunglasses, sunscreen, and anything else to set your day off on the right start. Take a look at one wall, and you're quickly introduced to Blizzard Beach's mascot, Ice Gator, who clearly has been through here. 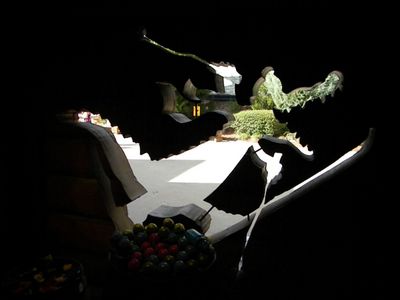 This is probably where Ice Gator landed when he first came off one of the waterslides. Photo by J. Jeff Kober.

In one direction you find changing rooms and showers, in another you find Lottawatta Lodge, which is one of several counter service facilities—and the largest—in the park. Take a look at the railing around the Lodge. Cutouts of palms and pine trees clearly indicate how opposites come together. 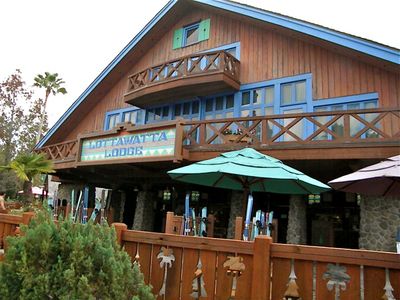 Before you is a tip board, similar to what you find in the theme parks. Nearby you find the "Disney legend" of how Blizzard Beach came to be when a freak snow storm came through the area, and a ski resort was built quickly thereafter. But, of course, the sun eventually came out, melting all the snow. It looked like the resort was doomed for failure until an alligator was seen sliding down a flume and splashing into a pool of water. Hence the arrival of Ice Gator. 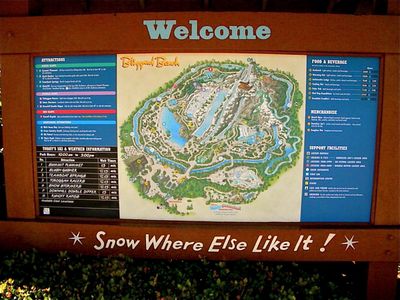 The tip board assures you that there is "Snow Where Else Like It." Photo by J. Jeff Kober.

Just as the parks have a focal point, the centerpiece of Blizzard Beach is Mt. Gushmore. It's nestled between palms and pines. 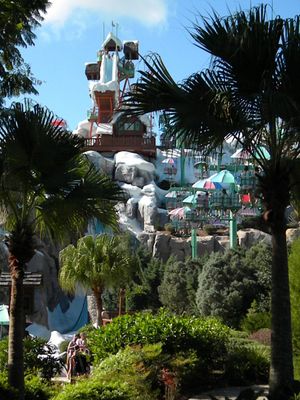 You can hike up there, but the most fun way to experience Mount Gushmore is by chairlift. There's a beautiful view as you climb the mountain, and to folks below, it really looks like you're on your way to ski. It's one of the great examples of going the extra mile on the details of an attraction—not just the addition of a chairlift, but theming it to look like your skis are going up with you. 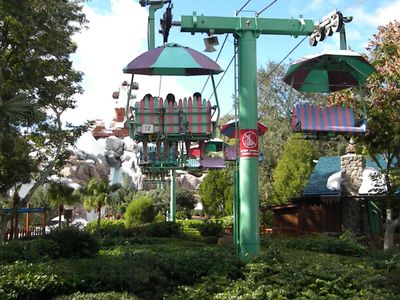 There is even a gondola for guests with mobility challenges. Photo by J. Jeff Kober.

From the top of Mount Gushmore the view is great. You've got Disney's Animal Kingdom in one direction; the Magic Kingdom in another; and Epcot and Disney's Hollywood Studios in a third. 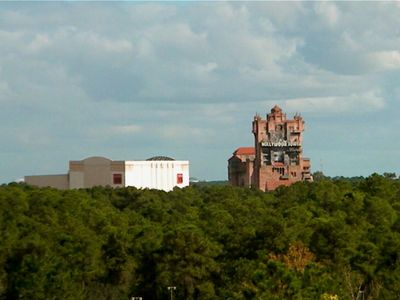 Spot the Twilight Zone Tower of Terror and the Rock 'n Roller Coaster in the distance. Photo by J. Jeff Kober.

Even more beautiful is the layout of the water park itself. The tallest of these views comes from Summit Plummet. 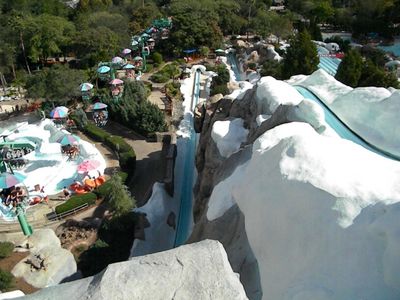 Looking down the Summit Plummet on the left with the Slush Gusher on the right. While Slush Gusher is smaller, you get longer air time. Photo by J. Jeff Kober.

With speeds heading toward 60 miles per hour, it's one of the tallest free-fall slides in the world at 120 feet. That's tall! I must admit, it is the one thing I have not done at the Walt Disney World resort (and I don't see that changing anytime soon). 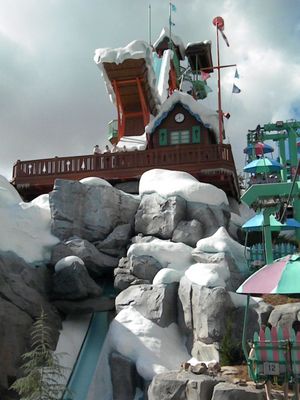 Summit Plummet gives the illusion of a skier going off the jump. Even water spurts out. In truth, the swimmer simply comes down below the rock and down the slide. Photo by J. Jeff Kober.

The theming abounds here, even at 120 feet in the air. Everything reflects skiing, snow, and wintertime fun. 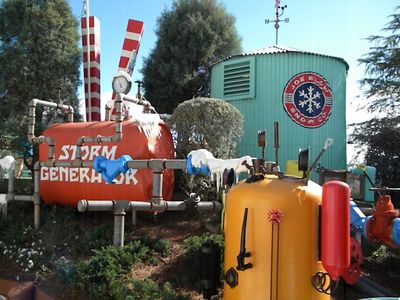 Most of the slides come off of Mount Gushmore. On one side, referred to as the Purple Slope, you have the Tobaggan Racers with its eight lanes. 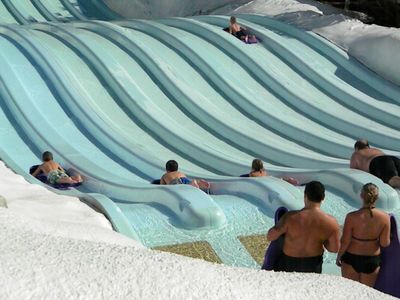 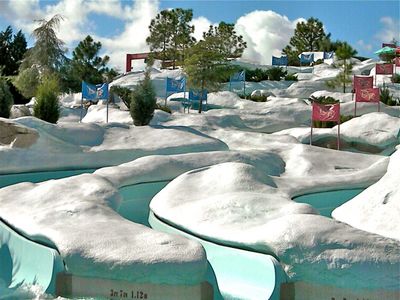 Snow Stormers really adds to the overall "feel" of the park as so many of the attractions do. You sense you are in a real ski resort. Photo by J. Jeff Kober.

Then there's Downhill Double Dipper, which times guests as they work their way down the slope on inner tubes. 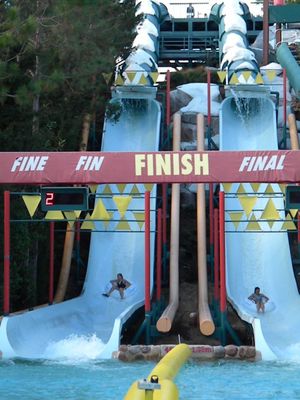 The Downhill Double Dipper isn't very long, but on a tube it really clocks speed. Photo by J. Jeff Kober.

On the Red Slope are the Runoff Rapids. Here you have two open and one enclosed tube slide. The rides are fun, but dragging a double-rider tube to the top is quite the workout. 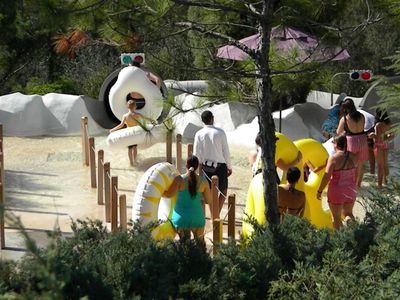 You can use one or two person tubes down any one of the Runoff Rapids. Photo by J. Jeff Kober.

My favorite of all the slides is Teamboat Springs. This is the world's longest "family white-water raft ride" and with four to six people in each, you are in for a tremendous series of twists and turns. 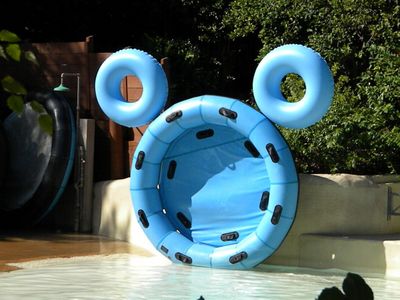 Back down on the bottom, there's still more excitement to come—especially for younger swimmers—at Blizzard Beach Ski Patrol Training Camp. 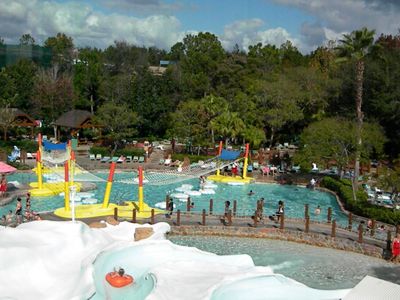 Many activities can be found in the Ski Patrol Training Camp. Photo by J. Jeff Kober.

Beyond a leisure pool there is Fahrenheit Drops where kids hang on to a "T-Bar" and swing over the pool. There's Freezin' Pipe Springs, which is a short body slide; and Cool Runners, which offers on a shorter inner tube ride. 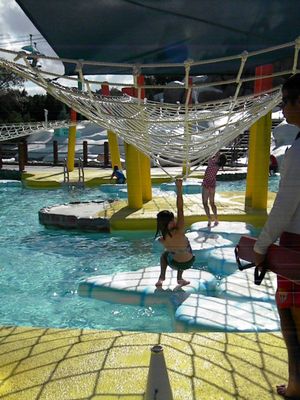 Those icebergs are trickier to climb through than you might think. More often than not, you end up in the pool. Photo by J. Jeff Kober.

For the littlest ones is Tyke's Peak, which offers a scaled-down version of many of the slides found at Blizzard Beach. 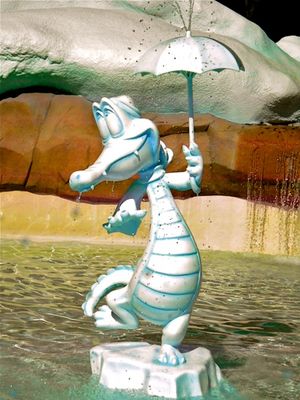 By the time you're done with all that, you'll want to head to one of the quieter places in the park. There's Melt-Away Bay with its bobbing short waves that are much tamer than Typhoon Lagoon's surfing-style waves. And they provide dedicated tubes to enjoy, as well. 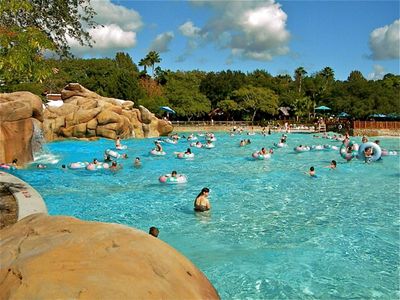 But my favorite is Cross Country Creek, which is one very long lazy river-style attraction. Here you can see plenty of theming, such as the bone-chilling ice cave. 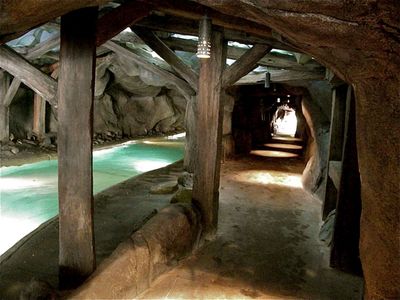 Lots of theming inside the ice cave. It's really a nice twist to your standard lazy river-style attraction. Photo by J. Jeff Kober.

There are plenty of other elements that are designed to splash you in some way, or help you to enjoy the journey. 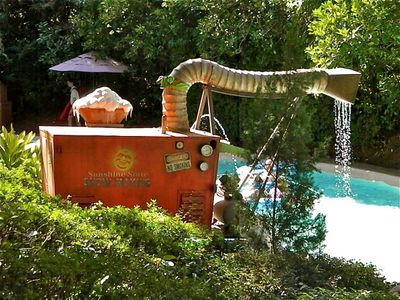 Props and features like this Sunshine State Snow Making Machine along the creek make it easy to get splashed. Photo by J. Jeff Kober. 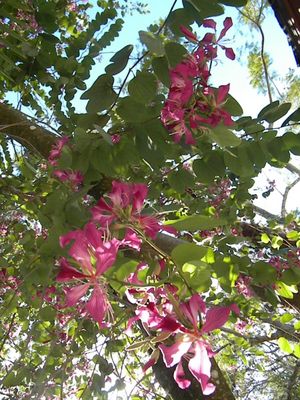 When floating down Cross Country Creek... look up. The foliage is beautiful. Photo by J. Jeff Kober.

There is nothing quite like Blizzard Beach. Fan sites talk about the four parks all the time, but I assure you that the water parks are probably Disney's best unkept secret. If you have not tried this out, you haven't done Walt Disney World. It's simply one of the most fantastic experiences you can enjoy when you visit Central Florida. 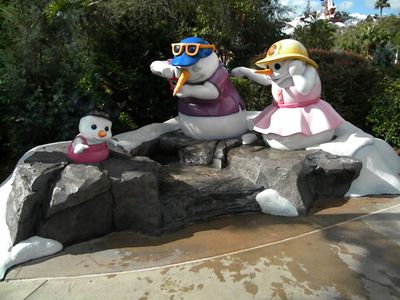 Blizzard Beach is popular with all kinds of tourists—including this variety. Photo by J. Jeff Kober.