Update It! Replace It! Change It Back! Epcot, Part 1

On today's show, Mike and Mark talk about attractions at Epcot that need updating or replacing, or should be changed back to what they were before an update or replacement.

Feature: Update It! Replace It! Change It Back! Epcot (part 1)

Mike and Mark talk about rides that need updating or replacing, or should be changed back to what they were before an update or replacement.

Discussion started with the EPCOT Center entry plaza, where it went from wide open with many flower beds and a lovely central fountain to the closed-in feel with the Leave a Legacy monuments. Mark compared the monuments to the reactions of Disney Legends Bill Martin and Morgan "Bill" Evans about the "cake-stle" created for Walt Disney World's 25th anniversary. Mark compared the inviting openness of the original plaza to the roadblock feel of the monuments. Mike and Mark both have tiles on the monuments, but both would like to see them moved from their current location (much like the Sorcerer's Hat at the Studios). 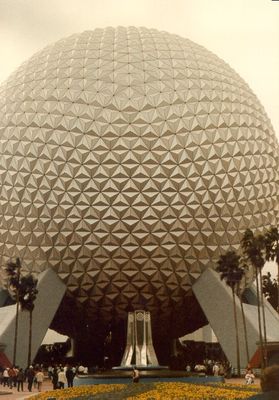 The original EPCOT Center entry plaza, with planters and a lucite fountain featuring the park's logo, provided a much more welcoming feel. Photo by Mark Goldhaber.

Next up was Spaceship Earth, where the narrator was changed from Larry Dobkin (great trivia question) to Walter Cronkite to Jeremy Irons to Dame Judi Dench. While Mike and Mark both had mixed opinions of the updates, they weren't quite ready to say "change it back." Mark also talked about the original dining reservations viewscreens at the exit to the attraction, and noted some of the changes in that area.

Discussion worked its way around through Communicore to The Living Seas/Seas with Nemo and Friends, The Land, Imagination!, and World of Motion/Test Track, including a short discussion of what's coming with the imminent redesign of Test Track. There were only a couple of minor disagreements. The most vehement "Change it back!" from both Mark and Mike was for Journey Into Imagination with Figment (version 2.1) to go back to Journey Into Imagination (version 1.0).

After Test Track, we ran short of time and had to stop for this show. We'll pick it up next time with the most egregious replacement that calls for a huge "Change It Back!"

Let us know which attractions should be updated, replaced, or changed back!

John Papas in New York wrote in to tell us that his kids love the sweepstakes aspect of the One More Disney Day promotion.

Pete Altemese wrote in to wish us a happy fifth anniversary.

Dave in San Francisco wrote in to both wish us a happy anniversary and to describe why he was disappointed by the One More Disney Day promotion.

We finished out the show with some silliness due to exhaustion and the late hour of recording.