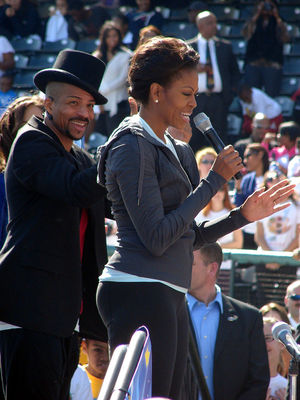 Mark started off by recapping the events he discussed on his blog the day after the event and in the Walt Disney World Update that week, talking about Radio Disney DJ Ernie D, Tony Horton, the Disney Channel stars, and Mrs. Obama. He also noted that the "Platypus Walk" dance that the kids learned and performed for Mrs. Obama was related to the "Platypus Day" event that Disney is holding this coming weekend on the Disney Channel and Disney XD.

Mark interviewed Roshon Fegan (Shake It Up), Debby Ryan (The Suite Life on Deck, Jessie), and Rosero McCoy (choreographer for Shake It Up and the "Platypus Walk"). Everyone was very nice and genuine. Everyone discussed staying healthy (to tie in with Mrs. Obama's Let's Move initiative and Disney's Art of Healthy Living), their favorite Walt Disney World attractions and Disney memories.

Mark asked for suggestions of some sort of "Disney Fit Club" type of activity that would let listeners join Mike and Mark in getting healthier. Mike had a couple of ideas, but we'd like to hear from you, as well! What would you be willing to do to get fit with us? 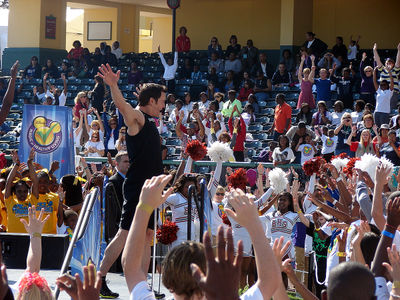 Tony Horton gets the crowd moving. Photo by Mark Goldhaber. 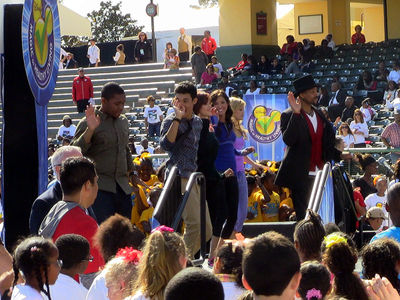 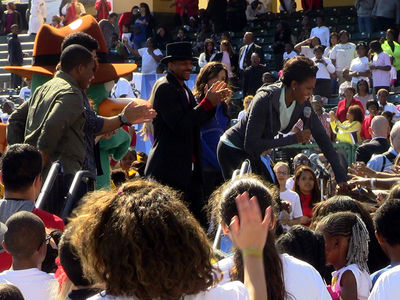 The First Lady interacts with the crowd as she arrives on stage. Photo by Mark Goldhaber. 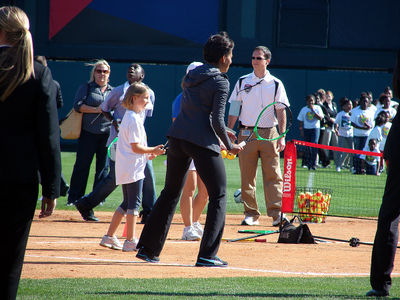 First Lady Michelle Obama enjoys a modified game of tennis. This appeared to be her favorite activity of the day. Photo by Mark Goldhaber.

Let us know which attractions you think should be updated, replaced, or changed back!

Mark will be spending his birthday this year walking to raise money for the March of Dimes. MousePlanet readers and MouseStation listeners have helped Mark to raise over $17,000 for the worthy charity over the last five years. This year, his goal is to raise another $4,000. You can walk with Mark, either in person or virtually, by joining Team MousePlanet and getting your friends and family to contribute! The Kid is also raising money this year. You can go to Mark's fundraising page to sponsor him, The Kid's fundraising page to sponsor him, or the Team MousePlanet page to join in and walk yourself! Help us to provide a better chance to prevent prematurity and to help those babies that are born prematurely!

Lots of comments this week on our Update It! Replace It! Change It Back! Epcot Edition shows.

nickjandrews posted in the show notes discussion thread on MousePad that he would like the Seas with Nemo and Friends pavilion changed back to the Living Seas with Sea Base Alpha and the quantity of fish in the main tank return to its original letter.

IllusionofLife posted via Twitter and in the show notes discussion thread on MousePad, contributing his feelings regarding multpile attractions.

Kevin L posted via Twitter that he loved Miks 'inteview with Tommy Tallarico in episode 402.

DisneyGator posted in the show notes discussion thread on MousePad that he prefers the Gran Fiesta Tour starring the Three Caballeros over El Rio del Tiempo.

carolinakid posted in the show notes discussion thread on MousePad that hey like the Gran Fiesta Tour, but they miss all the male eye candy that was to be found in El Rio del Tiempo.

mkelm44 posted in the show notes discussion thread on MousePad that they think that Ellen's Energy Adventure at the Universe of Energy pavilon really needs to be updated.

Vance Cope tweeted that he couldn't believe that we hadn't mentioned the Gallery of Arts and History at the Morocco.