"All things good, you have to wait awhile for it. And after 83 years I got my wish. Because I came down Main Street and I would look up at Marc's Window, and I would think the one next to it to him is not taken yet, so I would be wishing for it and wishing for it, and today the day has come,and I could'nt be more happy, except in knowing for years both Marc and I have had the great pleasure of bringing great fun and joy to people, and that was the jewel of our hearts." – Alice Davis. 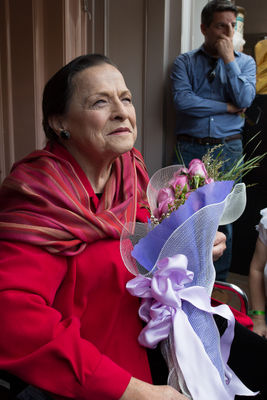 Alice Davis, a Disney Legend Costume Designer known for her work on Sleeping Beauty, "it's a small world," and Pirates of the Carribean, was recognized for her work yesterday in a special dedication ceremony that unveiled a new window on Disneyland's Main Street, USA. 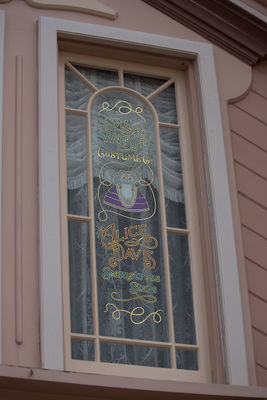 The Window Photo by Karl Buiter.

Alice Davis is the widow of the late Marc Davis, who himself had a major impact with the Walt Disney Company. One of Walt Disney's "Nine Old Men," Marc David himself is honored with his own window on Main Street, and so it is fitting that Alice's window was unveiled right next to her husband's. Her window, which sits to the left of Marc Davis', reads: 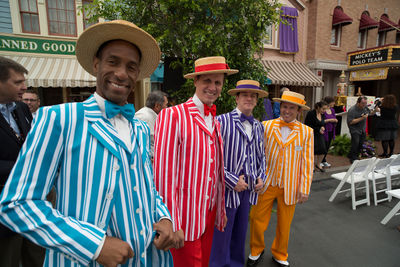 The Dapper Dans provide a song-filled introduction for the ceremony. Photo by Karl Buiter.

Under the typical marine layer of a Southern California morning, family, friends and guests gathered on Main Street to honor Alice Davis. The session began with songs from the Dapper Dans. Disneyland Resort President George Kalogridis said some opening words, then passed the podium to Disney Parks and Resorts Chairman Tom Staggs. Tom presented a brief narrative of Alice's life and accomplishments up through her "it's a small world" work. 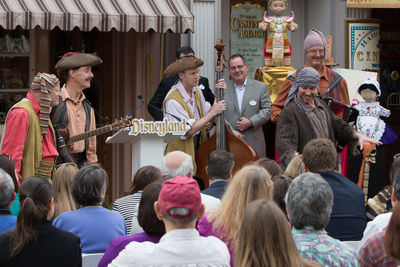 Pirates of the Caribbean sing "She Put the Pants on Me". Photo by Karl Buiter.

On hearing of Alice Davis appearing on Main Street, several pirates from the Pirates of the Caribbean appeared looking for new clothes. It seems that many years have gone by and they needed something more fashionable. Soon frivality ensued with the happy "Pirates Life for me"-inspired song titled "She Put the Pants on Me." 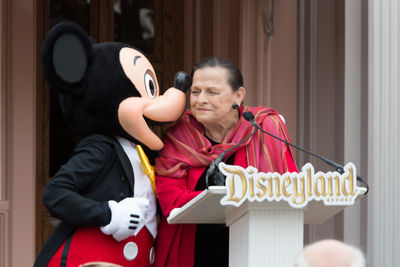 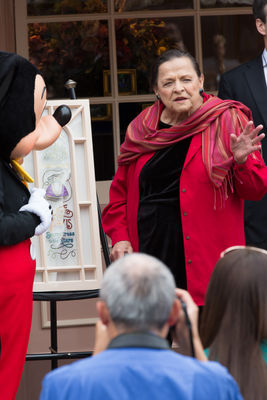 Mickey shows Alice the miniature version of the window. Photo by Karl Buiter. 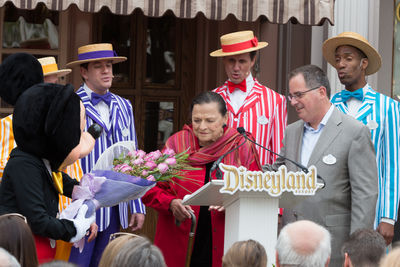 Mickey Mouse approaches the podium to present Alice Davis with a bouquet of flowers. Photo by Karl Buiter. 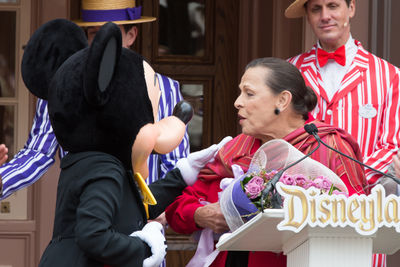 Alice Davis thanks Mickey Mouse for the bouquet of flowers. Photo by Karl Buiter.

A few heartfelt moments were shared as all celebrated the window. A miniature form of the window was unveiled for her keeping, with flowers presented by Mickey before the party moved to a reception. 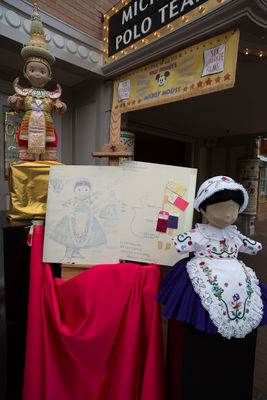 The dedication ceremony includes a display of work from "it's a small world". Photo by Karl Buiter. 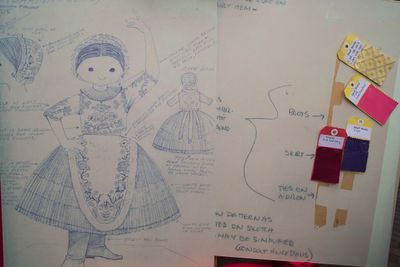 Costume drawing of doll from "it's a small world". Photo by Karl Buiter

Now Chouinard Art Institute was well known as the school for Disney Artists. And it was one of those night instructors and one of the original "nine old men" who was teaching in those evenings. She got permission to attend by assisting Marc by bring supplies and calling class roll. After Chouinard, she became employed designing womens lingerie at Beverly Vogue and Lingerie.

Marc Davis called her for another project in the mid-1950s. He needed to study how the Sleeping Beauty dress flowed over the figure. Alice came in and created the reference costume for Helene Stanley, the live action model for the Sleeping Beauty sketch sessions. Wedding Bells were heard in 1956 as Marc and Alice married.

On visiting the newlyweds, Walt Disney hired Alice as a Costume Designer for Toby Tyler and many other Disney television programs.

In 1963, Davis collaborated with art director and fellow Disney Legend Mary Blair on the "it''s a small world" attraction for the New York World's Fair. Davis later translated Marc Davis' original drawings of Pirates into clothing designs and patterns for Pirates fo the Caribbean in 1965,

Alice retired from the company 1978, leaving a legacy of significant Disney accomplishments. 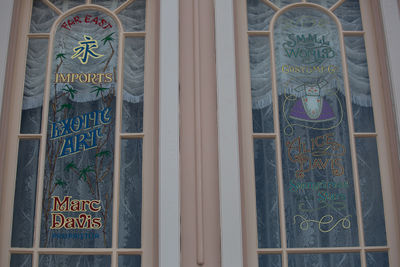 Marc Davis and Alice Davis both now have dedicated windows on Main Street, right next to each other. Photo by Karl Buiter.

Her window is located right next to her husband Marc Davis' window. The ceremony concluded with the singing of "When you Wish Upon a Star."