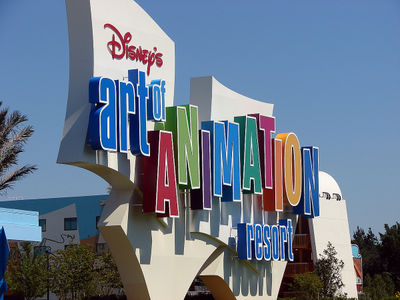 Disney's Art of Animation Resort opens today as Walt Disney World's newest resort. The value resort will eventually feature 1,120 family suites and 864 standard rooms in sections themed to four of the most popular Disney and Disney-Pixar films of the last 25 years. It wasn't originally supposed to be that way, though.

The second half of the resort, representing the 1900s through the 1940s, was to be called The Legendary Years, to be located on the other side of the Generation Gap Bridge, across Hourglass Lake.

Each half-century was to consist of 2,880 rooms in 10 buildings each, for a total of 5,760 rooms, equaling the combined rooms at the three All-Star Resorts, which had 1,920 rooms each.

In fact, construction work was under way on both halves of the resort from 1999 through 2001. However, in the wake of 9/11 and the resulting precipitous drop in tourism and the economy in general, Disney stopped work on the entire project, and indeed even existing resorts experienced partial closures due to lack of demand.

When work resumed on Pop Century the economy was only rebounding slowly and there was no need for all 5,760 rooms yet, which meant only The Classic Years saw activity. The complete and partial shells of The Legendary Years buildings sat untouched.

Pop Century opened in 2003 and was immediately popular. The Legendary Years was scheduled for a 2007 opening. 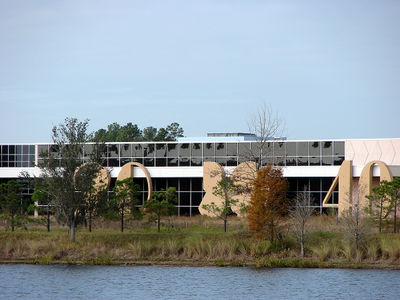 The lack of activity at the partly-finished resort led to many calling it the "ghost hotel." Photo by Mark Goldhaber.

Work never began on the resort, though. The bones of the resort remained, in full view of rooms on the back side of Pop Century, leading some to refer to Legendary Hall as "the ghost hotel." 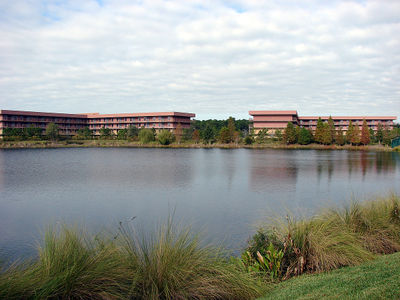 Hope was born anew, however, in October 2005, when the All-Star Family Suites opened on a test basis at All-Star Music. Word was that if the suites proved successful, The Legendary Years would be built as an all-suites resort. 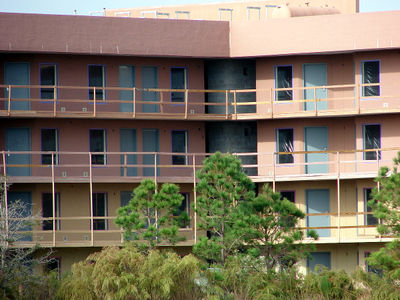 Because the 40s buildings were completed with standard rooms and exterior entrances, they are the only non-suite buildings in the new resort. Photo by Mark Goldhaber.

After initial tests proved successful, the suites were made available for reservations in February 2006. And after two months of strong sales, word emerged in April 2006 that The Legendary Years would be built with all suites. Contrary to some rumors at the time, the existing structures would not be torn down, but would rather be reused.

The work, however, did not start. The building shells, in fact, continued to stand there.

Since the Mermaid guest buildings had been completed with standard rooms and exterior doors, they would remain so. The structures of the remaining buildings were incomplete, and so they were completed with interior hallways and configured as family suites. 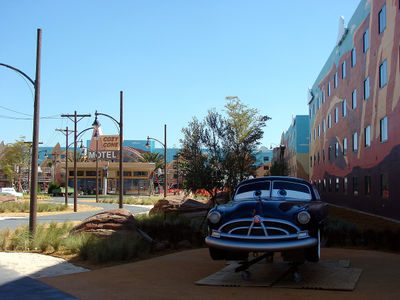 Doc Hudson sits a spell down the road from the Cozy Cone Motel. The Cars-themed section opens June 18. Photo by Mark Goldhaber.

The new resort carries the story of animation from the earliest ideas to the completed product during a guest's journey in from the entrance to their rooms.

From the entrance to Animation Hall under the porte cochere, resort guests find concept sketch art of characters from the four movies represented at the resort on the walls of Animation Hall. As they make their way through the colorful lobby, the sketches on the wall progress to more complete, final design images of the characters. 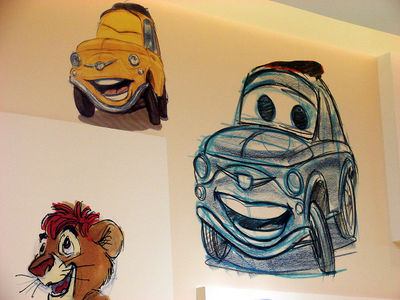 Concept art in the Animation Hall lobby shows why windshields work better than headlights as eyes, and gives a look at a concept Simba. Photo by Mark Goldhaber. 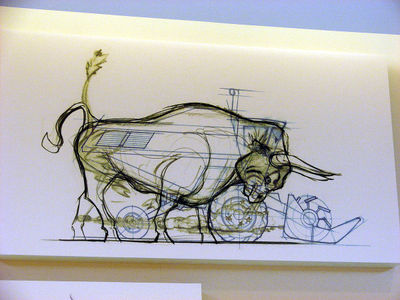 Concept art in the Animation Hall lobby gives a look at how Frank the Bulldozer was designed. Photo by Mark Goldhaber.

A light fixture at the end of the main hall features final character sketches, including one of Lightning McQueen drawn and signed by John Lasseter. The back wall of the hallway is covered with color studies, where the color palette for a film is worked out. 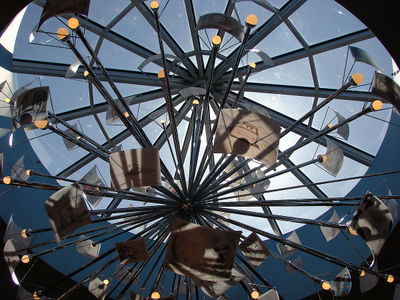 A light fixture under a skylight just outside the Ink 'n' Paint Shop features animation concept art, including one drawn and signed by John Lasseter. Photo by Mark Goldhaber. 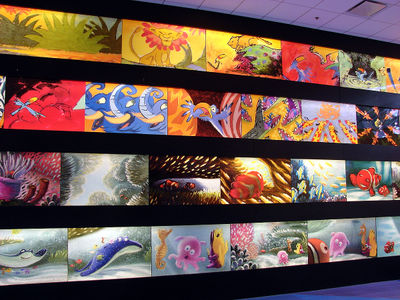 A color-key wall outside the Ink & Paint shop shows how artists set the color palette for an animated film. Photo by Mark Goldhaber.

Behind the color study wall, past the light fixture, is the Ink & Paint Shop, the resort's merchandise location. Ink & Paint is where animation cels (or digital frames) get their coloration after the animators have drawn the characters. The shop's wall fixtures are shaped like giant paint jars, arranged by color, and the whole shop has a bright, fun feel to it. 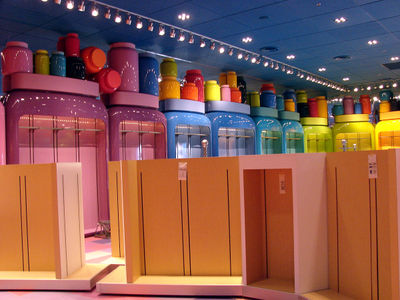 After the cels/frames are inked and painted, the next thing needed is the background, which is where the Landscape of Flavors Food Court comes in. Located right behind the Ink & Paint shop, the food court's dining area is broken into four sections, each themed to one of the resort's signature films. The theme is carried through via artwork on the walls, painted ceiling light fixtures, and more. 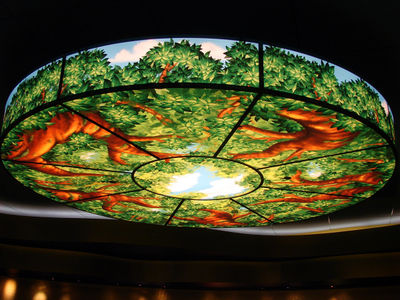 The ceiling fixture in the Lion King section of the dining area at Landscape of Flavors food court simulates looking up through a jungle canopy. Photo by Mark Goldhaber. 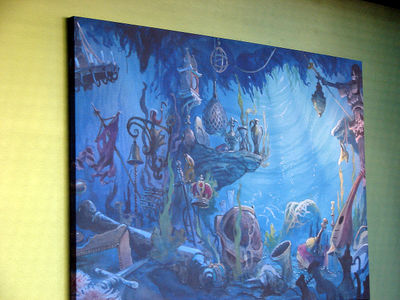 A painting of some of Ariel's treasures decorates a wall in the Little Mermaid-themed seating area in the food court. Photo by Mark Goldhaber.

Entering the finished film, each resort section's courtyard is designed to evoke the film's location. This is the "establishing shot," the long shot that provides context for the close-up shots to come. A great example of an establishing shot is the opening sequence of The Lion King, which provides long views of various areas of the African savanna, finishing with the iconic image of Rafiki holding baby Simba up at the edge of Pride Rock, while all of the animals bow down to the ground all around the savanna.

Each courtyard has an establishing shot: Finding Nemo's sea creatures having fun around the Big Blue pool, the Cars residents of Radiator Springs having a pleasant day on the little town's main strip, The Lion King's Simba, Timon and Pumbaa playing around the jungle while Mufasa stands atop Pride Rock, and The Little Mermaid's King Triton presiding over the his undersea world. 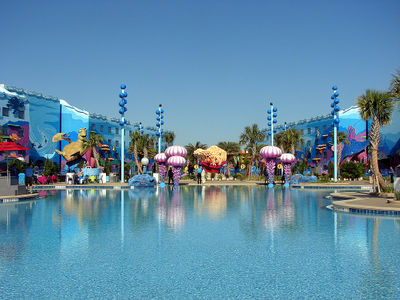 Guests submerging in the Big Blue pool will be able to hear conversations between Finding Nemo characters via underwater speakers. Photo by Mark Goldhaber. 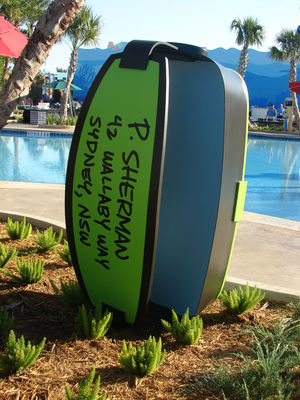 The pool rules are printed on the mask on the front of these goggles which appear to be the pair that was lost when Nemo was captured. Photo by Mark Goldhaber. 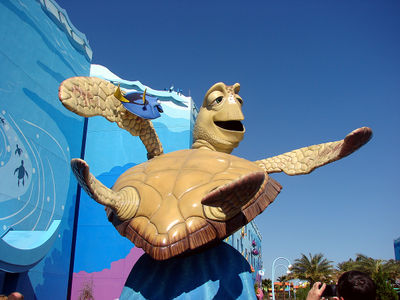 Dory and Crush surf the EAC near the pool. Photo by Mark Goldhaber.

What's left? The close-up shot. Each section's rooms bring to life a period in the represented film. As an added bonus, the bathrooms evoke a different scene. For example, in the Finding Nemo suites opening today, the main suite presents Nemo with fish and other friends, while the bathroom represents the submarine scene with Marlin, Dory, and the sharks. 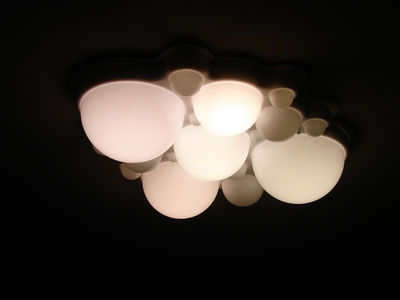 The dining/Murphy bed room has a "bubbly" light fixture. Photo by Mark Goldhaber. 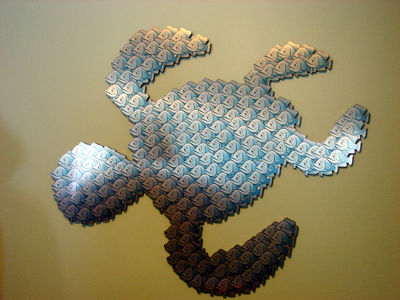 A school of fish "displaying" a sea turtle decorates one wall of the dining/Murphy bed room. Photo by Mark Goldhaber. 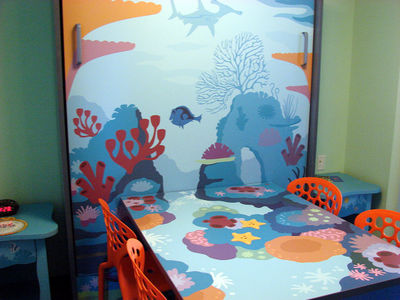 Dory swims along the decor when the front room of the suite is set as a dining room. Photo by Mark Goldhaber. 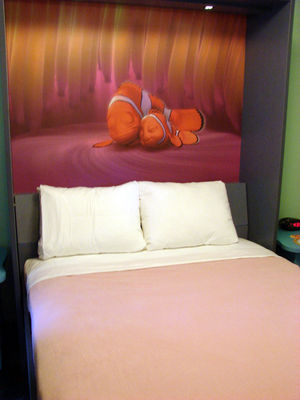 When you pull down the Murphy bed, the wall reveals an image of Marlin and Nemo sleeping in their anemone home. Photo by Mark Goldhaber.

While the resort is classified as a value resort, there appears to have been no skimping on details. Although the resort may feature smaller rooms and suites than the moderate and deluxe resorts, the theming is detailed and wonderful. That, combined with the demand for family suites and fresh theming, has driven the prices for the resort above those of the All-Stars and Pop Century, its sister value resorts. Perhaps in time they will balance out—but for now, you'll pay a premium for the value-level accommodations. 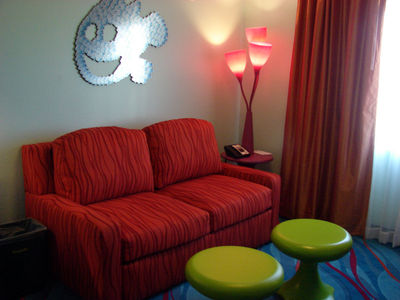 A small sleeper sofa in the living room sits below a wall hanging of a "happy" school of fish. Photo by Mark Goldhaber. 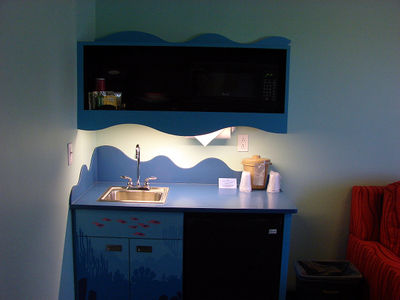 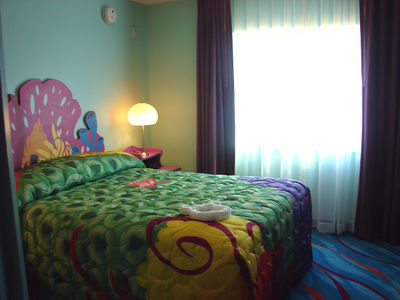 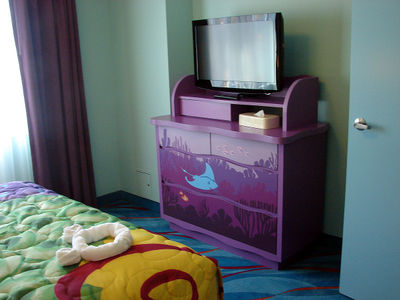 The image on the master bedroom's dresser suggests Nemo, Marlin and Mr. Ray swimming along the reef with other fish. Photo by Mark Goldhaber.

You can listen to an interview with Danielle Duffy, Associate Project Manager for the resort, on Episode 446 of the MouseStation Podcast.

Will you stay at Art of Animation? Do you prefer the new theming to the originally proposed Legendary Years? Should the remaining half of Pop Century now be called "Pop Half-Century"? Weigh in with your thoughts in the comments below.