It’s not every day that an original Walt Disney World attraction closes its doors. That’s exactly what happened this week though, when Snow White’s Scary Adventures at the Magic Kingdom took guests on their final trip through the dark forest and into the mines on May 31st. This classic dark ride has been scaring the pants off of little kids (and some big kids as well) since opening with the park in 1971. As of yesterday, we've heard its final scream. Princess Fairytale Hall, a Disney Princess meet and greet, will take Snow White’s place in the near future and little girls in princess dresses will come running for sure. The question is, “Will any of them miss what came before?”

My 13-year-old daughter, herself a reformed Princess-aholic is pretty upset that the Snow White ride is leaving. She’s more of a traditionalist like her dad when it comes to this sort of thing. Even though she herself wore the gowns and crowns back in her younger years, she’s just not ready to see Snow White, Prince Charming, and the Dwarfs pack up and leave just to make room for a Princess photo-op. My sons on the other hand were always a little put off by the whole Snow White’s Scary (emphasis on scary) Adventure experience. I’m quite sure the only part of this attraction they’ll miss is the only part they ever watched with their eyes open: the trip through the Seven Dwarf’s cottage. The rest of the time, the Wicked Queen, the skeletons, and the evil looking trees kept them truly in the dark.

I realize that the Seven Dwarfs Mine Train will be taking up residence just across the courtyard and it looks like it’s going to be an amazing attraction. I’m sure the Imagineers will outdo themselves and hopefully include some tributes to the old classic when this final part of the Fantasyland expansion opens in 2014. However, I felt it only fitting that on this, the first day after its closing, we pay our own tribute to this quintessential dark ride and one of Walt’s earliest theme park creations. That said, here are my Top 5 Things That I’ll Miss About Snow White’s Scary Adventures. 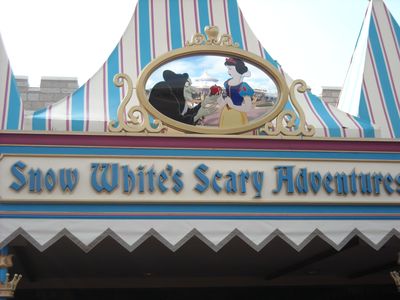 I know it may sound silly, but we always liked to take our spots in the final loading area and wait for “our” mine car to come into view. We’d take guesses as to which of the names of the Seven Dwarfs would be on our car. I always hoped for Dopey, of course. It's little things like this that get ingrained into your head when it comes to Disney attractions. 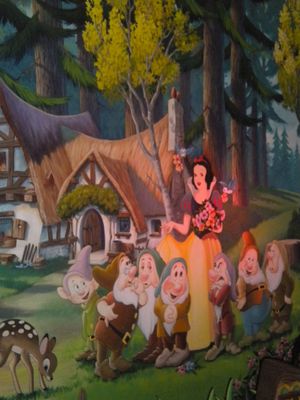 This is only a small piece of the wonderful Snow White's Scary Adventures mural. Photo by Chris Barry.

Snow White is really the one that started it all. It’s the film that ushered in a new era in animation, that of the feature length film. This beautiful mural features that classic animation style that still looks beautiful to me more than 70 years after the film’s release. My kids and I always loved trying to find the hidden Mickey on the Dwarfs boxer shorts hanging out to dry and that small Mickey on the chimney.

On our Walt Disney World trip last summer, I made the family aware that this would probably be the last time we would get to ride Snow White. We’ve always loved Dopey’s innocent wave goodbye at the end of the ride, but this time…we were really waving goodbye. This is one of those things that I hope shows up in the new attraction. Perhaps, Dopey can be waving hello to us all at the beginning this time around.

This is the classic freak-out moment for the youngsters. All things considered, it’s a pretty mild scare—but I still think it’s a great effect. It has certainly frightened the bejeezus out of many a young guest over the years. 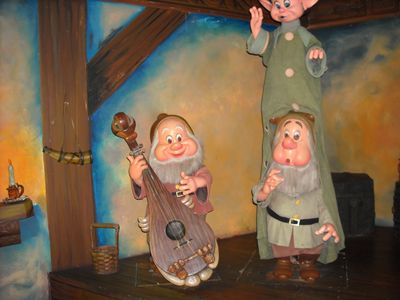 Three of the Seven Dwarfs inside their cottage provide a happy respite to an otherwise truly "dark" ride. Photo by Chris Barry.

To me, this is one of the happiest moments in any Disney attraction. This is also the moment where my kids would finally uncover their eyes. The kindly forest animals start to appear. The classic yodeling “Silly Song” is heard, and once you pass through those doors out of the dark forest and into the cottage, all is well with the world. This is the moment that I’ll miss the most for sure.

I realize that Snow White’s Scary Adventures wasn’t a very popular attraction. There was usually only a 10-20 minute wait at the longest whenever we were there. There was obviously never a need to install a FastPass machine here. Still, it was an original. It had Walt’s fingerprints on it as far as I’m concerned. It was in his original park in Anaheim more than 50 years ago, and it’s been in almost every Magic Kingdom-style park since.

I'm pretty sad that it’s now just a memory. This summer on our trip to Walt Disney World, it won’t quite feel the same with Snow White’s Scary Adventures gone. My kids may have rode through it with one eye open most of the time, but they’re sad to see it go as well. I guess it’s just one more reason for us to finally make our way west to Disneyland…or maybe Disneyland Paris…or even Tokyo. I think I might just have to do something like that; all for just one more spin through the quintessential Disney dark ride…Snow White’s Scary Adventures.

What are your thoughts on the loss of this classic attraction at Walt Disney World? Will anybody miss it as much as I will? Click on the “Discuss this article on MousePad” link below and let’s hear what you have to say.