Step into the DISH - a visit to Imagineering's Digital Immersive Showroom

Caution: the photos and video in this article contain spoilers about the new Cars Land at Disney California Adventure. If you'd prefer to be surprised, come back and read this article after you've experienced Cars Land in person.

If the Star Trek world were real, Holodeck technology would not be discovered for another 150 years.

While it may not be quite what Star Trek creator Gene Roddenberry envisioned, Cave Automatic Virtual Environment (CAVE) technology has been around for two decades—and fortunately for us, Walt Disney Imagineering (WDI) uses this technology to develop new attractions for Disney parks around the world, including Disney California Adventure park's new Cars Land, which opens to the general public on June 15.

Disney calls its version "the DISH" (Digital Immersive Showroom). The four-sided structure is tucked inside a nondescript bungalow on the Walt Disney Imagineering campus in Glendale, and was also used in the design of the Finding Nemo Submarine Voyage attraction for Disneyland. A group of reporters (including MousePlanet) had a special opportunity recently to visit, and learn more about the DISH.


Imagineer Mark Mine uses the DISH to give you a virtual preview of Radiator Springs Racers. Video by Adrienne Vincent-Phoenix. 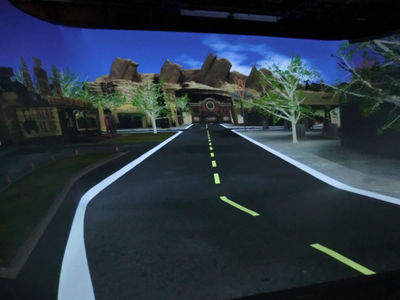 The Digital Immersive Showroom allowed Walt Disney Imagineering to bring Cars Land to life inside an office in Glendale. Photo by Adrienne Vincent-Phoenix.

Mark Mine, Director of Technology Concept Design for Walt Disney Imagineering, demonstrated how WDI uses the technology to design more than just thrill rides, and led us a virtual tour of Route 66 and Radiator Springs Racers.

The room housing the DISH looks a bit like a soundstage, with bare wood walls and overhead lighting rigs. The DISH structure measures about 30 feet wide by 15 feet tall and deep, with sloping front and side walls that meet a raised floor. According to Mine, that name came from the chaffing dish-like curve of the four surfaces. Four projectors, each powered by its own computer, create the 3D environment; a fifth computer controls them all. 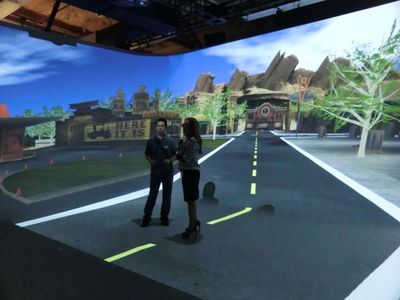 After donning special stereo 3D glasses, we stepped into the DISH and waited for the magic to begin. We began by looking at the Carthay Circle Theater, the new icon on Buena Vista Street that serves as the "castle" for the remodeled Disney California Adventure. A second Imagineer used a controller (another reporter identified it as being from an XBox game controller) to lead us through the virtual doors of the Carthay Circle Restaurant, while Mine explained that designers had used the DISH to determine table placement and traffic flow, even adding virtual people to evaluate how crowded the restaurant would feel under various scenarios. 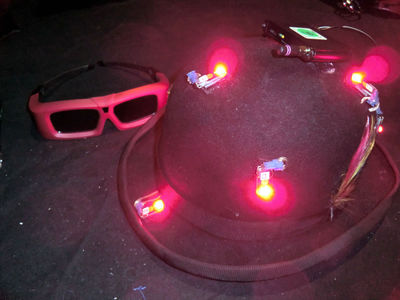 We then "walked" into the kitchen, where we learned a surprising fact—Disney used the DISH to design the layout of the new kitchen, bringing executive chef Andrew Sutton into the virtual environment so he could evaluate the placement of the stoves and counters. They also used the DISH to plan electrical, plumbing and air conditioning lines, allowing engineers to avoid problems that could delay construction.

Our next stop was Cars Land. The Carthay Circle Theater kitchen vanished, replaced by a blank skyscape. Not sure what to expect, I glanced around and then up. High on a side wall, I could make out vague shapes; as I watched, the images grew larger and resolved into recognizable structures, like Mickey's Fun Wheel and electrical power poles. 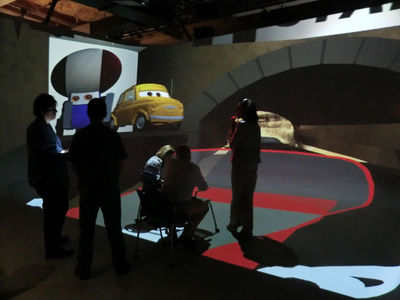 To anyone not wearing the special glasses, the image produced by the DISH looks severly distorted. Photo by Adrienne Vincent-Phoenix.

Seconds later, it seemed as if Cars Land had dropped into place around me, and I looked up to find myself "standing" in the middle of Route 66. As someone who has yet to step beyond the construction walls and into the new land, it was exciting to finally be there, even if "there" was really an office 50 miles away from DCA.

According to Mine, the DISH is ideally a single-user environment, as it relies in part on head-tracking technology to "lock" the 3D image to the perspective of a particular user. Sensors on an Imagineer-modified hat (there was much discussion as to whether the hat is properly described as a bowler, derby, or fedora) let the computer track every movement of the person wearing the hat; for everyone else, the image is distorted as the target person moves around the virtual world. 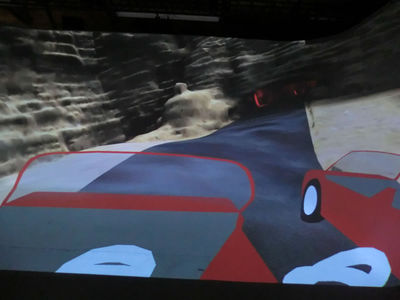 Once you don the stereo 3D glasses, it feels like you're in the middle of the action. Photo by Adrienne Vincent-Phoenix.

When it was my turn to don the hat and walk around the exterior of Flo's V8 Café, I was impressed by how completely my mind accepted the projected images as real physical items. While wearing the hat, I could walk around and even between items in the image as if they were really there, bend down to examine detail, then look to the horizon and watch the sight lines change as I moved about. The effect is convincing enough that, even after I handed the hat to another volunteer, I was careful not to step into the virtual gas pump my brain insisted was still really behind me.

For our virtual test ride on Radiator Springs Racers, we first set up six chairs in the center of the DISH, lining them up to the ride vehicle body projected on the floor. Mine placed the hat on a stand in the middle of the chairs to lock the image to the center of the "car," and we took our places. 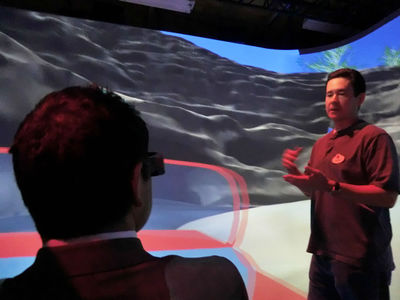 The environment is completely immersive, even to the windshield in front of you and the seat restraints on either side; if you look down you see the road passing beneath the car. Though the DISH lacks motion effects, the ride experience was completely compelling. I'll admit, when we rounded a canyon turn and saw where the waterfall will be, I got a little teary eyed—and I couldn't blame it on the wind.

Though we did not physically move, the 3D environment was enough to give a strong sense of forces we will experience on the real ride. According to Mine, Imagineers are planning to add a motion base to the DISH for added realism. 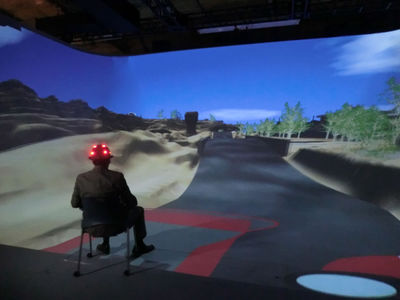 A reporter dons the head tracking hat for a ride through Radiator Springs racers. Photo by Adrienne Vincent-Phoenix.

Using the DISH, Imagineers can work out issues of scale, proportion, timing, animation, and sight lines very early in the design process, offering a cost-effective way to try various options before any physical work begins. According to Mine, John Lasseter often stopped by to consult while Imagineers looked at Radiator Springs as it appears in the Cars movies, and where everything is scaled to cars, and designed a version scaled to human beings. Still, Mine says that there will always be some aspects of design, especially tactile elements and lighting effects, that require nonvirtual, real-life testing. 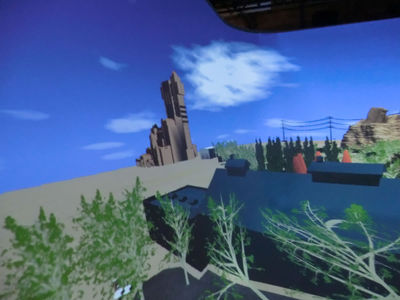 The DISH also let Imagineers visualize sight lines from inside Cars Land before it was ever built. Photo by Adrienne Vincent-Phoenix.

While Imagineering is currently using the DISH mostly for new ride development, Imagineers can also put the technology to use in renovating existing attractions, though that poses some new challenges. Since few classic rides were developed using digital tools, they lack computer-aided design (CAD) models for the DISH to render. Imagineers can either build a CAD model for the rides, or just film them using 3D cameras and use the DISH to play back the ride video.

Imagineering currently only has one DISH, but is considering building more for use in Asia and Florida. According to Mine, the technology is especially helpful in overcoming language barriers when working with their counterparts at the Tokyo, Hong Kong, and new Singapore Disney resorts (since a lot can be shown visually rather than communicated verbally). 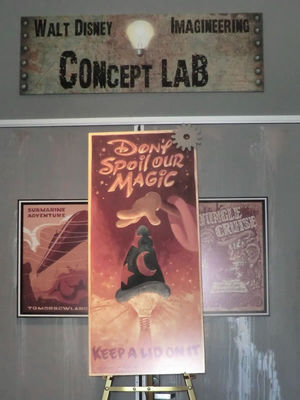 A sign outside Concept Lab reminds Imagineers to keep a lid on the secrets beyond the doors. Photo by Adrienne Vincent-Phoenix.

Several members of our tour asked if Imagineers had considered turning the DISH into a new theme park attraction all its own, sort of an updated Circlevision. There are definitely challenges to doing so, said Mine, not the least of which is that the 3D imagery works best with just one user. He did add, however, that elements of the technology may find their way into future attractions. Perhaps some day we'll be able to experience Disney's latest thrill ride without every leaving our home.