MouseAdventure in Wonderland Goes Down the Rabbit Hole

Rain threatened to cause another "Rain Gear Games" at MouseAdventure on Sunday, April 10, but blue skies prevailed in the end. Over 500 players came out to participate in MouseAdventure in Wonderland, the spring game at the Disneyland Resort, sponsored by MousePlanet.

The day began with check-in and rules presentation at the AMC Theatre in Downtown Disney, a new starting venue for the event. Teams were then scattered around Downtown Disney to receive their game materials before heading into Disneyland Park to begin their quests. 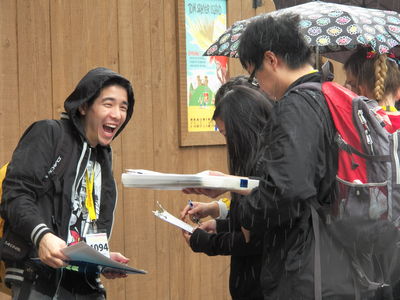 A sudden shower at the beginning of the day made way for sunny skies later. Photo by Aaron Maggs.

Basic teams were tasked with completing eight quests and a set of trivia questions themed to Alice in Wonderland; Advanced division teams received an additional three quests to complete in the same six hours of game time. Quests were scattered in every land of the park, with two of the quests only available after the start of the game.

The first of these, "Thru the Looking Glass" was carefully folded and presented in a custom tea bag distributed from "MouseAdventure Central" (located at the Jolly Holiday Bakery) for mid-morning tea at 11:30 a.m. The quest sent teams onto Main Street to search for answers. The final question was written backwards, requiring teams to use an event-provided mirror to read the text. Advanced teams were additionally challenged with the entire quest written backwards. 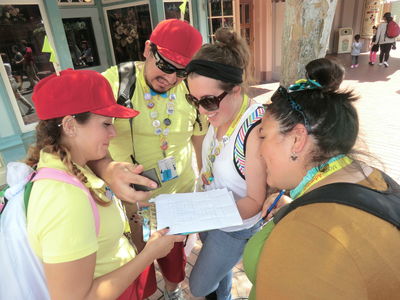 The second quest, "The Caucus Race and a Long Tale," available after 11:30 a.m. required teams to find the Cheshire Cat, a crew member wandering Tomorrowland with a bright pink Cheshire Cat boa. This quest required teams to collect a variety of information related to trains from a combination of lands including Main Street, Toontown, and New Orleans Square.

Pig and Pepper used sets of word connected by "and" or an ampersand (&) found throughout Tomorrowland, some of which were tricky to find. One data point was lost during the Super Hero HQ removal, so a last minute substitution of an item off the Tomorrowland Terrace menu threw many for a loop. 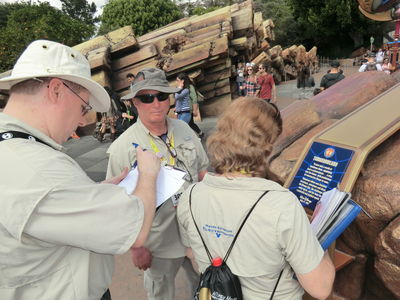 Toontown quest "Eat Me, Drink Me" was easy for teams with a sharp eye for detail. It presented zoomed-in photos of items around the land paired with an option of two words. The correct word moved teams up or down on a scale based on the Goofy Water chart located near the fruit cart. 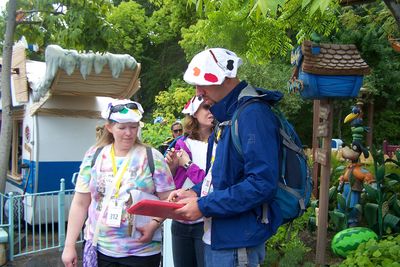 Animated Inanimates (Team 312) searches Toontown for answers in the Eat Me, Drink Me quest. Did they notice scarecrow Goofy behind them? Photo by Lora Parral.

Critter Country hosted two quests, including one ("The Walrus and the Carpenter") that utilized the construction walls currently surrounding that end of the Rivers of America. The old attraction posters adorning the construction walls presented an opportunity for the MouseAdventure staff to devise a quest that connected images taken from the posters to words on that same poster. The lines drawn intersected a set of other words that combined to form the final question.

The second quest in Critter Country, "The Queen's Croquet Ground," seemed easy at first—but the final answer proved elusive for many teams. Sometimes you have to explore farther than you think to find answers during MouseAdventure. 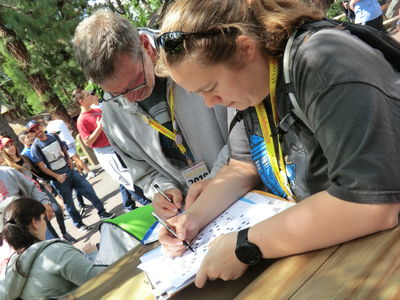 A trash can makes a useful writing surface during MouseAdventure. Photo by Adrienne Vincent-Phoenix.

Frontierland was the setting for "Tweedledee," a quest that led to more than a few frustrated sighs from players. Photos of sections of words containing the letters "DE" were presented to teams, who searched high and low to find them. Some teams needed to be reminded of just how far Frontierland extends according to the guide map. This quest also contained one errata point, after Disneyland cast members finally removed a sign announcing the next departure to Tom Sawyer Island. 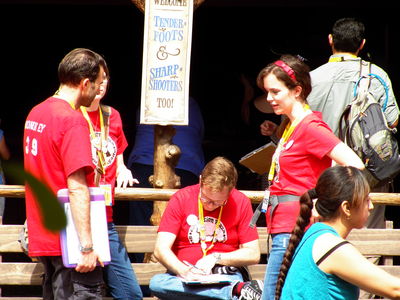 A team works the "Tweedledee" quest in Frontierland right in front of one of the signs used. Photo by Lora Parral.

Advanced teams were sent up Tarzan's Treehouse to find the missing words from book pages, although some failed to note the pages' order, requiring another trip up and down the stairs. It's always best to carefully read the instructions before embarking at full speed ahead during MouseAdventure. "Painting the Roses Red" tasked Advanced teams with finding items in New Orleans Square with a floral motif.

The final Advanced quest was one that required teams to carefully observe the Mad Tea Party ride vehicles and note the color order of the tea cups on each disk. Each team received a series of paper disks that were then encoded based on Fantasyland questions, and these disks became the key to decoding a series of colored dots leading to the final answer. The key to solving this was working out the quest mechanic and working similar encoding points at the same time instead of in order on the page. Having a sharp eye for color also helped.

Full results for all teams are available at MouseAdventure.com. Total possible points for the Basic division was 470 and for Advanced was 600.

The best new team (not otherwise placing) was Bee at the Beach with 330 points. Although there were not enough teams to make a full family division, our highest scoring team in that category was team Frog Car with 145 points. 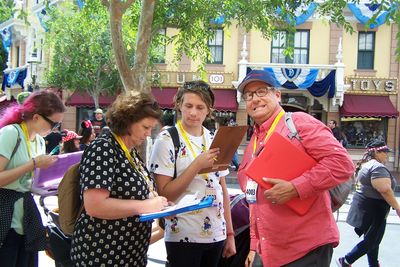 With this win, Naboombu All-Stars become the latest team to join the ranks of MouseAdventure Masters—teams who have won first place in any division three times. 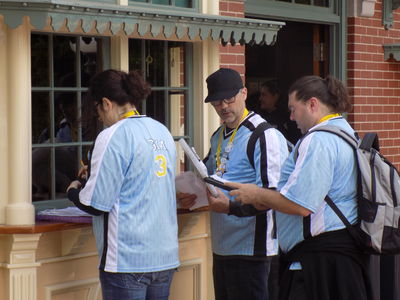 Naboombu All-Stars work on the train-themed quest, "The Caucus Race and a Long Tale," on their way to Master status. Photo by Aaron Maggs.

Although not eligible for any prizes during non-Invitational MouseAdventure games, many master teams return to compete against one another, mainly for bragging rights and the thrill of the puzzle hunt. Four master teams competed in MouseAdventure in Wonderland, including the newly formed Big Hero 4 (a subset of Simba's Pride, now a family team with their two young children). The teams received the following scores: 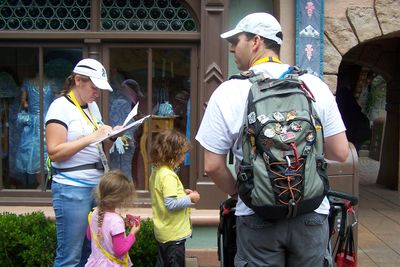 Masters team Simba's Pride has morphed to Big Hero 4, and is training the next generation of players. Here they learn the importance of bringing snacks. Photo by Lora Parral.

Expect a full breakdown of quests with answers to be posted on the MouseAdventure website soon.

A scaled-back, introductory version of MouseAdventure in Wonderland was presented at the Day at the Park event on April 17. Teams were given fewer quests than the Basic division for the regular event, and some of the Basic quests were simplified to help new players learn the MouseAdventure ropes.

The next MouseAdventure event will be Silly Symphonies at Epcot and the Epcot Resorts in Walt Disney World on May 14. Registration is still open for this Florida event. The next Disneyland Resort-based game will happen this fall, although no date has been set at this time. See MouseAdventure.com for more information on these upcoming events.