Frozen – the hottest ticket in town | This and that... | Crowd Forecast

Frozen – the hottest ticket in town

If you're hoping for MousePlanet's review of the new Frozen – Live at the Hyperion, which debuted this weekend at Disney California Adventure, that will follow later this week. For today, we'll provide you with the information you need to catch the hottest ticket in town. 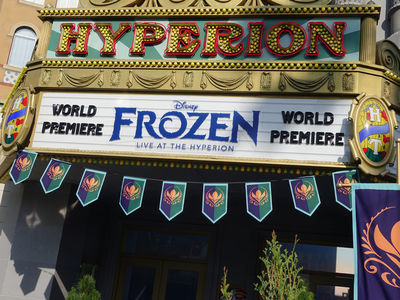 Frozen – Live at the Hyperion debuted this weekend at Disney California Adventure. Photo by Adrienne Vincent-Phoenix.

At present, there are only three scheduled performances of Frozen – Live at the Hyperion each day. Showtimes are in the afternoon, at 12:30, 2:35, and 5:10. The schedule is published only through June 10, and we expect additional shows to be added in the summer.

The show is presented at the Hyperion Theater, which can accommodate just under 2,000 people per performance. With fewer than 6,000 people able to catch the show each day, Fastpass tickets are used to let park visitors experience other rides and shows without waiting in line all day. Disney distributes Fastpass tickets starting at park opening, from machines located near the theater entrance. Tickets are issued in show order, which means Disney will distribute all tickets for the first show before moving on to the second show, and so on.

If you absolutely must see the first show of the day, plan to arrive at the park at or even slightly before park opening to get in line to claim a Fastpass. As is Disney policy, all members of your group must have used their admission ticket for entry to Disney California Adventure that morning to obtain a FastPass—no fair sending Dad in to get tickets for the whole family while everyone else sleeps in at the hotel. 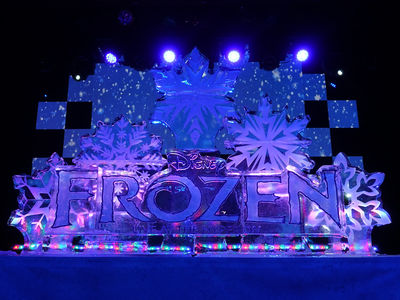 "Frozen – Live at the Hyperion" replaced "Aladdin – A Musical Spectacular" after a 13-year run. Photo by Adrienne Vincent-Phoenix.

If you don't care which showtime you attend, you don't need to arrive right at park opening, but to be safe, you should be there within about two hours. During the four-day opening weekend, Fastpass tickets ran out anywhere from 90 minutes to three hours after park opening.

At this time, none of the Disneyland Resort restaurants offer a dining package that includes Fastpass tickets to Frozen, but give it time—if the show is a hit and Fastpass tickets continue to run out early in the day—there's bound to be a new offering. 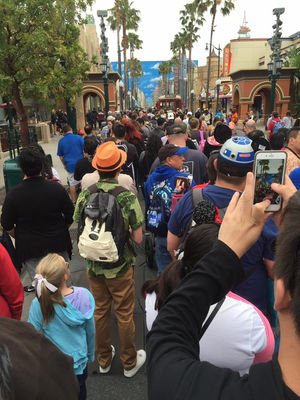 "Frozen" fans fill Hollywood Blvd. as they wait to receive a Fastpass ticket to the new musical. Photo by Lani Teshima.

The return time printed on each Fastpass ticket tells you when you should come back to the theater, generally one hour before showtime. When you return, cast members will direct you to line up for one of the theater's three seating levels. depending on how many people are already there. While every seat in the theater has a good view of the stage, some sections are always better than others. For this show, we recommend sitting in the back of the Orchestra section, or the center of the Mezzanine.

Of course, being picky about your seating means you'll need to return extra early, even before the return time printed on your ticket. MousePlanet's Lani Teshima attended the 12:30 p.m. show this weekend, and joined the return line at 11:26 a.m. She reported, "We just got in line for Orchestra seating and the holding area is essentially half full already."

If you don't care about where you sit, just be sure to return to the theater at least 20 minutes before showtime. After that, Fastpass tickets are no longer honored, and any remaining seats are given to those waiting in the Standby line outside the theater. If you miss out on getting a Fastpass for the show, you can always hope for a spot via Standby, but be prepared to be separated from your companions as the ushers attempt to accommodate everyone and fill every empty seats. 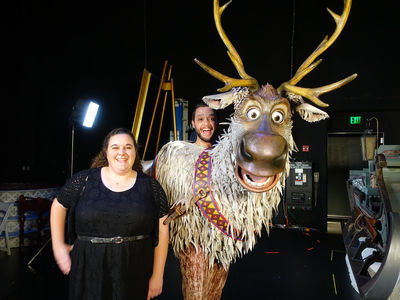 Katie Metzger interviews the performer who portrays Sven following the premiere of "Frozen – Live at the Hyperion." Photo by Adrienne Vincent-Phoenix.

The show's running time is just over an hour, quite long by theme park standards. While the Hyperion was being readied for Frozen, Disney added cup holders to the theater's seats. Cast members roam the theater before the show, offering popcorn and soft drinks. Unfortunately, Disney did not use the hiatus to build a proper lobby or restrooms for the theater, so be prepared to leave the theater and walk to the adjacent restroom complex if nature calls during the show.

We'll have our review of the new show later this week, but for now check out our interviews with some of the cast and crew of Frozen – Live at the Hyperion.

Backstage with Sven at "Frozen – Live at the Hyperion." MousePlanet Video.

...We reported last week about a new refillable popcorn and beverage promotion for Disneyland Resort Annual Passholders, and Disney officially announced the program last week. The promotion is a good deal for popcorn fans, and the 64-ounce container pays for itself after five refills. The soft drink promotion may be a more difficult sell, if only because passholders have to carry around the bulky Made with Magic sipper cup to receive their refills. While the World of Color version has a removable inner cup, at the moment cast members say that passholders must present the entire unit to receive the $1 refill.

If you do purchase the refillable drink cup, we noted that the World of Color version, sold at Disney California Adventure, holds two ounces more than the Chernabog version sold at Disneyland. 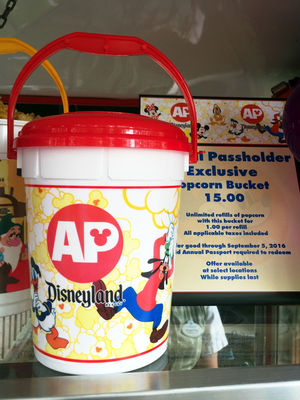 The refillable popcorn bucket has a special design just for annual passholders. Photo by Alex Stroup. 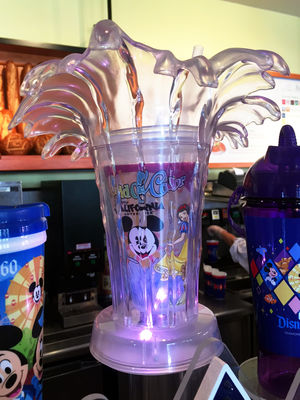 The refillable drink promotion requires passholders to purchase—and bring back—one of the Made with Magic mugs to receive $1 refills. Photo by Alex Stroup.

...House of Blues Anaheim is scheduled to close its Downtown Disney location today, May 31. Disney has not said what is happening with the 23,000-square-foot restaurant and concert venue. The House of Blues will reopen later this summer at the Anaheim Garden Walk shopping complex across from Disneyland.

...Artist Dave Avanzino is scheduled to appear at the Disneyana shop in Disneyland this Saturday and Sunday, June 4-5 from 11 a.m. to 7 p.m. The artist will have his new Hatbox Ghost artwork and Disneyland Alphabet limited editions available. 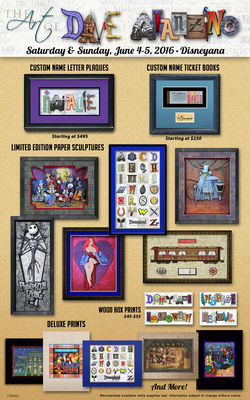 Artist Dave Avanzino will be at the Disneyana shop Saturday and Sunday, June 4–5. Photo © Disney.