It's time for another trip to Walt Disney World. What a great sentence that is. I don't have a trip booked but there's been some discussion of something over the summer. Needless to say, I'm ready to go. Ready to book. Ready to head back to the place that brings me such joy. I don't need much to inspire me to head back to Disney, but the live action Beauty and the Beast seems to have gotten me more in the mood for a heavy dose of magic. Only time will tell. In the meantime, writing about Disney certainly keeps the magic flowing for me, so let's continue on our trip around the veritable heart of Walt Disney World, the Magic Kingdom.

My first article in this series started us at the most logical beginning point, Main Street U.S.A. Then we took a left at Crystal Palace and explored the lush walkways of Adventureland. Today, we're going to keep that clockwise path going. We'll exit Pirates of the Caribbean and head left swinging around the back way to our next Magic Kingdom land, Frontierland.

I have to be perfectly honest, the whole Old West theme has very little appeal to me. Yes, I grew up watching reruns of The Lone Ranger and Zorro, but that's pretty much where it all stopped for me. I'm not a big Western fan. So, it might seem like Frontierland doesn't do all that much for me. On the surface, it shouldn't and, once again, I can take or leave the whole theme of the land. But it just so happens that Frontierland has two of my all time favorite Disney attractions as well as some of my top spots to get away from it all anywhere on Walt Disney World property. Go figure. So, let's get right to it and countdown my Top 5 things to see in Walt Disney World's Frontierland.

This is my favorite pin store anywhere in Walt Disney World. I'm a big pin trader and so were my kids. The Trading Post was and still is a required stop when we're back in Frontierland. 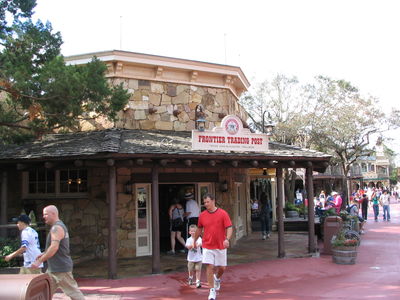 The Frontier Trading post is your place for Disney pins and much more in Frontierland. Photo by Brian Bennett.

I love the way the whole place looks. The props, the Brer Fox Wanted poster, the Tic-Tac-Toe board, and the general look of the place scream the Old West. It's not just the theming though. I've always found the cast members here to be some of the friendliest on property. It must be a happy place to work. Keep an eye out for a nod to an old Disney TV series. The Frontier Trading Post sign on the building lists "Texas" John Slaughter – Trail Boss as the proprietor of the shop. Texas John Slaughter ran in the late 1950s on Walt's Disneyland TV show.

One of the all time true great coasters exists back in this corner of the Magic Kingdom. Big Thunder Mountain is a Disney classic and one of my favorite coasters anywhere. 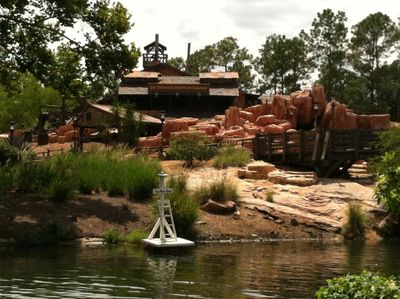 For all three of my kids it was a perfect introduction to the bigger, more thrilling rides that Walt Disney World has to offer. Not too crazy, but certainly a bona-fide thriller. I don't think I'm exaggerating when I say that, with perhaps the exception of Expedition Everest over at Animal Kingdom, Big Thunder is the best themed roller coaster there is.

3 – The Rivers of America Walkway

This is one of those wonderfully "hidden in plain sight" spots that exist throughout the Magic Kingdom and elsewhere in Walt Disney World. If you're heading from Liberty Square towards the Frontierland Mountains, Splash and Big Thunder, head to the right towards the river and meander down this amazing wood planked walkway instead of the main thoroughfare. It almost feels secluded and yet you're about 20 feet away from one of the busiest main drags in the park. 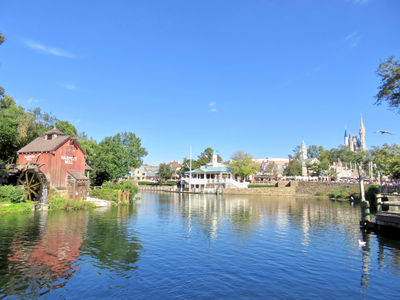 The walkway along the Rivers of America offers some of the best views in Walt Disney World. Photo by Alan S. Dalinka.

There are small streams and waterfalls leading into the river. It's a popular spot for waterfowl. You get the view of Tom Sawyer Island across the way and Big Thunder Mountain off in the distance. If you're lucky, the Liberty Belle will come chugging by. It's one of my favorite walks in Disney World and on top of the secluded feeling and natural surroundings, it can actually serve as a bit of a shortcut to the big attractions in the back corner of the land.

Yes. I put this classic second on my list. Wait to read Number One for that explanation. Splash Mountain is probably my favorite ride in any Disney park or perhaps anywhere for that matter. It's an 18-minute Disney masterpiece, and the kind of attraction that I don't think we'll see them build anymore. It's incredibly elaborate. 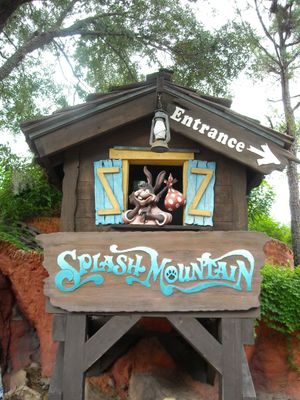 The details are everywhere. It's chock full of characters, more than 100! It's got great music, so much to see and multiple drops before you even get to the main five-story plunge. You can't ask for anything more out of a Disney attraction. It's worth getting soaked, and I always seem to be the one drenched after we disembark. My family has taken to putting me towards the front as the sacrificial lamb to block the water from them. My favorite thing about Splash Mountain occurs after the big drop. Just when you think you've seen everything on the ride and you've experienced the big thrill, you enter the "Zip-a-Dee-Doo-Dah" room with its massive riverboat full of singing animals. What a way to end your journey.

I'm expecting some flack from some of my readers for putting this first on my list, but I stand by my choice. Tom Sawyer Island is pure genius. Walt wanted his Magic Kingdom to be an escape; a place you could go to and slip into a living, breathing story unfolding right in front of you. Obviously, it succeeds in this mission. How brilliant was it then to have an escape within an escape, Tom Sawyer Island? It's like a separate little land all of its own, isolated in the center of the Rivers of America.

This is one of those examples of Disney theming and design that goes above and beyond. When I'm at Walt Disney World, I feel like I've left the real world behind. After the raft ride over to Tom Sawyer Island, I feel like I've entered a secret hidden world even further away from the world I left behind. It's a haven that allows you to revert to your youth. I challenge you not to feel like a little kid roaming around on Tom Sawyer Island, exploring dark caves, hiking up hills, visiting an old fort, or clumsily making your way over the barrel bridge.

My favorite thing to do on Tom Sawyer Island is to take a break in one of the rocking chairs that look across the river at Big Thunder Mountain. It's a very special spot in a very special little part of Walt Disney World. 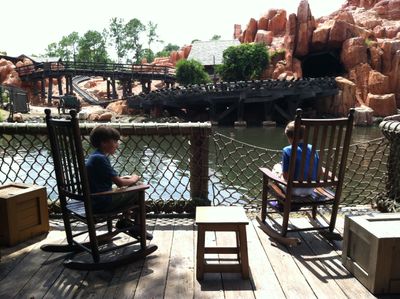 My favorite boys in my favorite rocking chairs on Tom Sawyer Island. Photo by Chris Barry.

Don't take Tom Sawyer Island for granted. Don't skip it. But most of all make sure you stop and take your time when you're out there. Relax, let it soak in and you'll begin to appreciate its genius. Big Thunder and Splash Mountain may have the thrills and the classic Disney characters and music but in my eyes, it's Tom Sawyer Island that offers that moment of transformation that the Disney parks are rightly heralded for.

For someone that really couldn't give a hoot about the Old West, I certainly do have a great time when I'm in Frontierland. It is a beautifully themed land. I've covered just about everything but, as is typically the case with Disney, there's still plenty more there to experience. Head back to Frontierland and stroll along the water. Meet Donald Duck wearing his Davy Crockett coonskin cap. Have a fantastic burger with all the fixings at Pecos Bill's. Catch the classic Country Bear Jamboree. Grab a seat on top of one of the barrels or crates to watch the parade go by. You're sure to have a blast in Disney's version of the wild Old West.

Those are my picks for the best of Walt Disney World's Frontierland in the Magic Kingdom. As always, I'd like to hear what you have to say. Click on the link below and let me hear your Frontierland thoughts and I'll see you next time as we mosey on over to Liberty Square.