My Disney Top 5 - Things to See in Epcot's Norway Pavilion

My family and I just spent five days basking in the warm sun and crystal clear blue waters of Turks and Caicos in the Caribbean. It was hard to tear myself away from my most favorite place, Walt Disney World, for a vacation, but we needed some precious beach and chill time before we take my daughter off to her first year of college this weekend. It's been years since we were in the Caribbean and I had almost forgotten just how amazing time on a tropical island could be. I was quickly reminded as soon as I woke up the morning after we arrived and gazed out my window at the remarkable turquoise water and spectacular beach as far as the eye could see. We were definitely in the right place.

My last Top 5 article here on MousePlanet was about something warm and sunny as well, the Mexico pavilion in Epcot's World Showcase. So, my mind has been happily stuck in the tropics for the last few weeks. Now it's time to say goodbye to warm seas and bright sunny beaches as we move all the way up north to Scandinavia, more specifically the next stop in my trip around the 11 nations of Epcot's World Showcase—Norway.

Norway was not one of the original countries represented in World Showcase when it opened in 1982. Guests didn't get to visit this wonderful pavilion until 1988, making it the most recent addition to the World Showcase. It was originally intended to be a conglomeration of several Nordic countries. When $30 million worth of investments all came from one place, it was decided that the one single nation that coughed up the funds, Norway, would be the next country to be represented in World Showcase. In June of 1988 Crown Prince Harald V dedicated the new pavilion and Norway officially became one of the select few nations to have a country surrounding Epcot's World Showcase Lagoon.

When you approach the pavilion from either side, you face stark contradictions. Approach from one direction and you are leaving China. Approach from the other and you are exiting Mexico. Norway's charming architecture, rugged landscape, and beautiful flowers and waterfalls are a welcome sight; it's always been one of my favorite nations to tour in World Showcase. There's plenty to see and do in this section of Epcot, so let's get to it and count down my Top 5 things to see in Epcot's Norway pavilion.

5 – The Smell of the Puffin's Roost

I'm hoping that there are readers out there that know exactly what I'm talking about when I say this. After you disembark the Frozen ride and make your way through the various interconnected shops in The Puffin's Roost, you come to the final room and "wham" your senses are hit with a truly intoxicating aroma. If you blindfolded me, walked me around in circles for hours, and then brought me to this room I would immediately say, "Norway. Epcot!" It's that distinctive and that memorable. 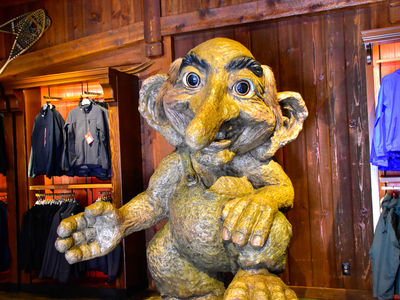 Keep walking past the giant troll and you'll begin to smell that heavenly scent emanating from within The Puffin's Roost. Photo by Bonnie Fink.

I've never purchased the cologne or the perfume for sale here, and I'm not sure why, because it's one of my most favorite smells anywhere. That's a weird thing to say, but it's true. The scent just screams Epcot to me and from what I understand, you can only find these products for sale in the Norway pavilion and at a Nordstrom's department store. Sounds silly, but's it's a heavenly scent and I love smelling it each and every time we visit Epcot.

This is one of those intricate details that make World Showcase such an amazing place. I think it's safe to say that unless you know it's there, you'd never look up and notice the grass roof of the seating area for the Kringla Bakeri Og Kafe. Sod roofs are apparently an age-old tradition in Norway, and are used for more than just their quirky beauty. 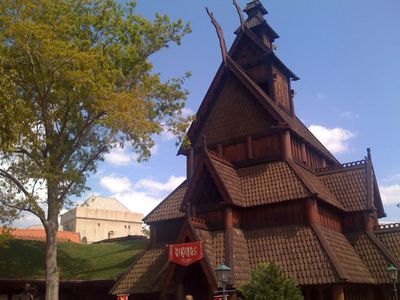 You can clearly see the sod roof to the left of Norway's stave church in this photo. Photo by J. Jeff Kober.

The practical side is that they're durable and provide excellent insulation. I have yet to witness it, but they say that the Disney horticultural cast members trim the grass by hand with a set of clippers. It's also said that in Norway, actual goats were used on the rooftops to do the trimming. I don't suppose we'll see that anytime soon in World Showcase. Next time you enter the Norway pavilion, look up on the left hand side after you enter for the remarkably unique sod roof.

I have to say that I was quite skeptical about the Frozen invasion of Norway. I thoroughly enjoyed the film, but I never quite understood the phenomenon. Perhaps my daughter being a teenager and not of the "Frozen age" influenced my feelings. Had she been younger when the film debuted, maybe I would have been more in the thick of the whole Frozen craziness? That could have been positive or negative. I might have been more sick of the over exposure to the film and its stars and songs had it been on in my house daily as I suspect a whole generation of families did. Regardless, I did like the film and its music, but I was hesitant when I heard of the Frozen takeover of Norway, as was each member of my family. 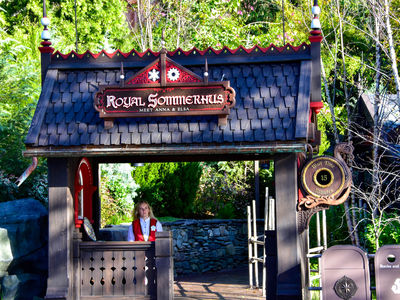 The Royal Sommerhaus is where guests can meet Anna and Elsa. There is, of course, a team of Disney PhotoPass photographers on hand to capture the moment you're sure to want to remember. Photo by Bonnie Fink.

Upon our first revisit, we were all very pleasantly surprised with how Frozen was incorporated into the pavilion. We happened to be there late one night during evening extra magic hours. We had Fastpass+ reservations for the ride and then walked over to the Royal Sommerhus where there was a 5-minute wait. We figured this was a golden opportunity to see what they had done in this section of the pavilion without a monster primetime wait. We were all so glad we did.

Everything from the architecture, to the flowers, to the details inside the summer cottage, to the fantastic and engaging cast members playing Anna and Elsa was a homerun. It's a beautiful addition. It totally fits in with the theming of the rest of the pavilion. Don't miss it on your next visit, especially if you can score a low wait time like we did. They did an amazing job here and it's worth experiencing.

It was tough not to put Akershus, Norway's main dining establishment, on this list. But the more I thought about it, the more I realized that, over the years, I have enjoyed grabbing lunch and a snack at Kringla much more than I have enjoyed having dinner or breakfast at Akershus. Don't get me wrong. Akershus is great. If you want to meet princesses, it's the best and probably easiest place on property to do so. The food can be quite good—dinner more so than breakfast—and we've had some fantastic cast member moments here. 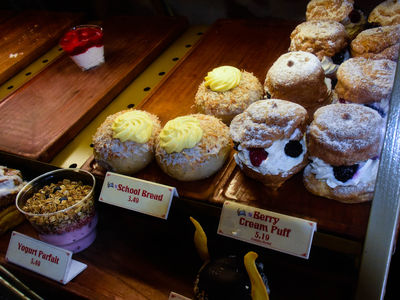 School bread and berry cream puffs are examples of some of the Norwegian inspired pastries that can be found at Kringla in Norway. Photo by Donald Fink.

It's hard to beat the smoked salmon sandwich or ham and apple sandwich for lunch or dinner outside at Kringla. You can get the traditional Kjottkake—Norwegian meatballs—from the Akershus menu out here as well. But it's the desserts that really shine at Norway's counter service restaurant. Grab a sweet pretzel, a school bread, a troll horn, or a lefse and a cold Carlsberg and have a seat outside under the sod roof. You'll be thankful that you did.

I realize that the Epcot purists out there might hand me my behind for placing this attraction at the top spot of my list, but please hear me out. I'm not totally opposed to shoehorning the various Disney franchises into Epcot, if, and that's the operative word here, if, it's done well. Frozen Ever After, despite replacing a very popular attraction in its predecessor, Maelstrom, is very well done. I was pleasantly surprised.

The biggest test was my teenage boys. Frozen is a tough one for them. We saw the film together on opening day, as we typically do with all Disney films and we all liked it a lot. Then the phenomenon hit and the over saturation that came along with it and they were instantly turned off. "Why does everything need to be Frozen?" they consistently lamented. They were of that ilk when they heard I booked the FastPasses for Frozen Ever After and reluctantly entered the queue with me that night. The fact is, they did such an excellent job on the attraction that even they, the jaded teenage boys, were turned around. "That was actually pretty cool," was the response I believe they uttered afterwards. That's a monstrous endorsement. 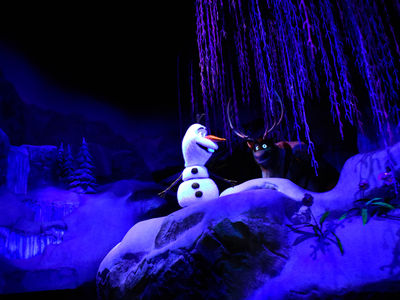 Olaf and Sven (background) in a scene where Olaf sings a song. Photo by Donald Fink.

I'm not entertaining the discussion right now of whether Frozen Ever After belongs in the Norway pavilion or not. The fact of the matter is, it's there and it's beautifully done. The little kids of the Frozen era that know nothing of Maelstrom's polar bears and trolls will forever remember this attraction as they grow up. It's their Peter Pan's Flight if you will. The ride whisks you off to Arandelle and warms your heart with the film's iconic songs. The details in the queue are everywhere. The animatronics are quite impressive, especially Olaf. It's a new must see attraction. I wasn't expecting to be converted and lo and behold a year later I'm putting it as my number one thing to see in the Norway pavilion, so they must have done something right.

Norway was a favorite of mine from the moment I turned the corner past the stave church and wandered back to watch the Malestrom boats plunge down the falls. It's a beautiful landscape full of flowers and stonework. The architecture is wonderful. You can have some great food and drink, meet a ton of characters, buy some unique items in The Puffins Roost and experience a top notch Disney attraction all in one pavilion. Stop into the stave church for the well done exhibit inside that displays some of the nation's history and how it inspired the Frozen film to put the cherry on top of the incredible treat that is Epcot's Norway Pavilion.

That's my Top 5 for World Showcase's Norway. Do you agree or disagree with my choices? As always, click on the link below and let me hear your thoughts and I'll see you next time as we keep traveling around World Showcase with a stop in China.