My Disney Top 5 - Things to See in Epcot's Mexico Pavilion

In my last series of Top 5s, I took a look at the first half of Epcot, Future World. I broke it down into east, west and central. Now it's time to hang a left after Future World and start a clockwise journey around the other half of Epcot, World Showcase, one of the truly unique offerings in all of Walt Disney World. I was recently interviewed for the Disney Weekly podcast and they asked me what were my absolute "must dos" at Walt Disney World.

My first answer was quite simple. It's never really a trip to Disney until I experience Peter Pan's Flight. Yes, it's simple. It's not a very advanced attraction as far as technology or scope and size. God yes, the wait times are sometimes excruciatingly long if you don't hit it first thing in the morning. None of that matters to me. I'm an instant kid again as soon as I approach the attraction and hear the Peter Pan music. That whole "instant kid" moment is part of the Walt Disney World mystique for me personally. It's what I'm after from the get go.

The other thing I said I always have to do when I'm in Walt Disney World is visit World Showcase. It's one of my most favorite spots in one of my most favorite places on Earth, preferably at night, when the lights come on, the torches are lit and that pre-Illuminations music is playing in each of the 11 pavilions. I'm a very happy camper at that moment. Truth be told though, World Showcase is an amazing place to be at any given time. There's nothing like it anywhere else in the world. Where else can you experience the best architecture, art, music, cuisine, and people of so many nations in one space? New York City? More specifically, Queens perhaps?

With all due respect to my home borough of New York City, I find World Showcase to be just a little bit more magical than Queens Boulevard or Main Street, Flushing. Both have an astonishing mix of cultures, but one has a whole lot less traffic, noise, and parking meters. The irony is that the genesis for World Showcase and Epcot itself can more than likely be traced to Queens.

Walt Disney's extensive personal involvement with the 1964-65 New York World's Fair, held in Flushing Meadow Park in Queens, no doubt left a huge impression on him. The grand World's Fairs of yesteryear were supposed to be showcases of future technology and world cultures. Ring any bells? It's no mere coincidence that Walt and his Imagineers notions of what Epcot could be came soon after their experience with the New York World's Fair. Legend has it that Robert Moses, the fair organizer and infamous New York master builder wanted Walt to build a "Disneyland East" in Flushing Meadow Park once the fair was over. Walt, of course, already had his eye on land in Florida.

Legend also has it that after Walt's death there were two separate models of two separate parks in one room, one an early version of Future World and the other an early version of World Showcase. As Disney legendary Imagineer Marty Sklar tells it, both halves were literally pushed together and what we now know as Epcot became whole. Epcot has often been described as a permanent World's Fair. That's a fair comparison. The intent of foreign nations having a pavilion at the fairs was to expose the guests to the cuisine, art, music and people of their respective host nation. That sounds an awful lot like what goes on every single day in Epcot's World Showcase, doesn't it? So, let's see if they succeeded and begin an extended look at each of the countries represented in Epcot's World Showcase. We'll take that journey clockwise around World Showcase Lagoon and begin with my Top 5 things to see in Epcot's Mexico Pavilion.

One of my favorite things about the Mexico pavilion and something that makes it stand out from all the others is that it's essentially all indoors. There is a counter service restaurant and sit down restaurant outside the impressive pyramid structure, as well as a meet and greet spot with Donald Duck, but the bulk of the pavilion is inside the great pyramid. 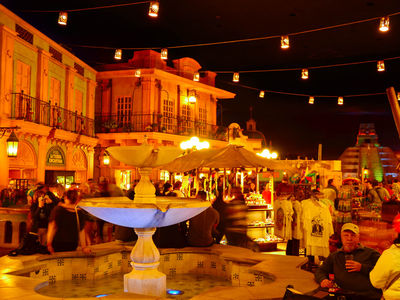 The interior of the pyramid in the Mexico pavilion, World Showcase, is packed full of street vendors and shops. Image by Donald Fink.

I'm not sure who's idea it was to go for a constant nighttime look and feel inside, but it was a brilliant decision. It adds a whole other level of immersion to the pavilion and it's something truly unique in Epcot. Just wandering around inside "at night" is a pure joy.

I was a little surprised when I heard they were building a second table service restaurant in the Mexico pavilion. I was already a big fan of the original restaurant, which you'll read about shortly, and didn't see the need for another. Once I dined here, I understood the difference. 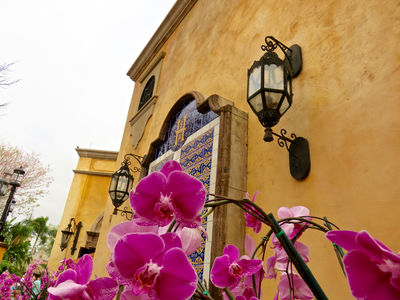 The flowers are in full bloom outside the Mexico pavilion's La Hacienda de San Ángel. Photo by Alan S. Dalinka.

First of all, as they say, location, location, location. Dining right along the waters of World Showcase Lagoon is a real treat. The views are wonderful. I haven't managed to dine here during Illuminations but as I understand it, they dim the lights and pipe the music in and that sounds like an awfully nice evening to me. The décor is interesting. There's a delicious menu of margaritas (try the avocado), and the food is really quite good. It's hard to go wrong with the carnitas Yucatecas: pork confit with pico de gallo, cabbage, citrus juice, and avocado salsa.

I always thought tequila was the harshest of drinks, and I was shocked when it became so trendy. That's before I was exposed to really good tequila and all that you can do with it. This isn't lick the salt, take the shot, and suck the lemon. 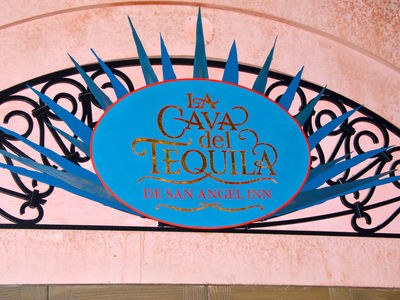 La Cava del Tequila is an awesome little spot to come in; have some chips, salsa and guacamole; and sample some truly outstanding drinks. Try some fantastic margaritas like blood orange, cucumber, hibiscus, or passion fruit. Want to be more of a purist and see a whole other side of tequila? Try a flight and sample some of the 70 different types they stock here at a given time. It's a tequila treasure trove for enthusiasts as well as newbies. The best part is it's always nighttime in the Mexico pavilion, so it's always time for a little tequila.

It's a simple boat ride for sure. There are no drops, no shocks, and no loud noises. Nothing goes wrong and there are no villains to scare the kids. It is, however, an Epcot classic full of beautiful scenery and a visit from the Three Caballeros. 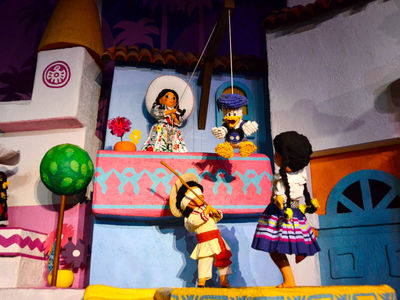 Where is Donald Duck? The Gran Fiesta Tour is inspired by the 1944 Disney Movie, "The Three Caballeros," where two friends, Panchito and Jose travel through Mexico's tourist destinations in search of Donald Duck. Image by Donald Fink.

I had no problem when Donald Duck and his two bird friends were added to the attraction several years ago. I was even more thrilled when they actually emerged as full-blown animatronics instead of animated characters on a video screen. There's never a wait for the Gran Fiesta Tour and as a family, we never miss it.

I've caught my share of flack here on MousePlanet for loving this restaurant as much as I do. So much so that years ago, I even had to defend my love of the place with my Top 5 reasons that I love dining at the San Angel Inn. My Top 5 back then were the mango margaritas, the food, the atmosphere, the hidden Mickey in the volcano smoke, and the Gran Fiesta Tour. I still stand by these reasons. We love dining at The San Angel Inn. 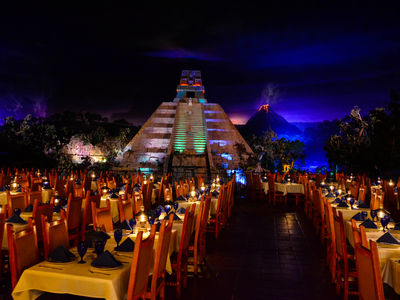 The San Angel Inn is inside the pyramid of the Mexico pavilion at Epcot. This high quality restaurant offers classic mexican dishes. Image by Donald Fink

Sitting here soaking up the aforementioned nighttime feel, drinking a delicious margarita, watching the boats go floating by, and looking for the hidden Mickey in the volcano smoke continues to be one of my favorite dining experiences on Disney property. I've never been disappointed with the carne asada or the lomo de puerco en pipian or the caramel ice cream for dessert. And to top it off, when I'm done I can casually walk onto a classic Disney attraction right there that never has a wait. It's my favorite part of visiting the Mexico pavilion and it's a must do for my family on just about every trip we've ever taken.

You can't beat Mexico for food. There are four places to dine in one pavilion, a pretty impressive statistic for World Showcase. My good friend Jason wanted it on record that he feels the restaurant outside by the lagoon, La Cantina de San Angel, offers one of the best counter service deals in the park. I can see him now sitting by the lagoon enjoying tacos and a cold Dos Equis on a hot Orlando afternoon grinning from ear to ear. I have yet to be down there with him, but I'm looking forward to joining him at La Cantina someday soon.

The Mexico pavilion is a wonderful place to start your World Showcase adventure. Take the time to stroll through and appreciate the details. The exterior of the pyramid is a great place to start. Don't just walk in. Stop and look up and around. It's a beautiful structure. Meet Donald Duck outside for the little ones...or even the big little ones, like yours truly. Enjoy the Mexican art in the first room that you enter. Spend time shopping in the open plaza. Check out the crystal shop. Have some tequila. Have some great food. Look for Mickey in the smoke. Listen to the mariachi band. Above all, close your eyes and imagine that you've left Orlando and traveled south of the border. When I'm sitting inside the restaurant enjoying the cool Mexican "night" with good food, good drink, and family and friends, that's exactly what I do and that's the whole point of World Showcase isn't it?

Next time, we head north to Norway. In the meantime, click on the link below, let me hear your thoughts on Epcot's Mexico pavilion and I'll see you next time with another Disney Top 5.