The looming blockouts mean this coming week will be extra busy with passholders hoping to get their one last look at Disneyland and Disney California Adventure for the year. There are no blockouts at all this Monday through Wednesday, and these are the final three days for holders of the two Southern California passes to visit before January 7, 2018.

Although our partners at TouringPlans.com project this Friday to be only "4" on their 1-to-10 scale, we suspect the number will be much higher, especially if the weather holds. If the last two weekends are any indication, this coming Saturday and Sunday will also be very busy, with Deluxe and Signature passholders making their final visits before January 2 and 3. If you plan to visit the parks either weekend day, be sure to arrive as early as possible to avoid the parking shortages some visitors have experienced this month.

The third edition of the revamped Disney California Adventure Food & Wine Festival is scheduled to run six weeks next spring, from Friday, March 2 through Thursday, April 12. With this addition to the schedule, 2018 is shaping up to be the Year of the Fest at the Disneyland Resort. Take a look at the calendar as we know it so far:

If we assume that Pixar Fest will run through the summer, followed by Halloween Time, the Festival of Holidays and Holidays at the Disneyland Resort, that's a full year of marketing hooks for the Year Before Star Wars Land opens.

When the Pixar Play Parade debuts at Disneyland on April 13, the parade will include three new floats. According to the Disney Parks Blog, the new lead float features Luxo, Jr. chasing the iconic Pixar ball. A second float features the characters from Up, while the final includes the stars of Inside Out. 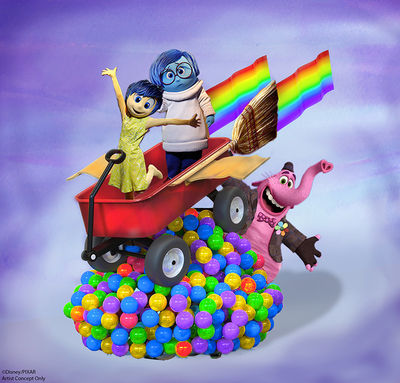 Joy, Sadness and Bing-Bong ride in a magical wagon on the Inside Out float. Photo © Disney. 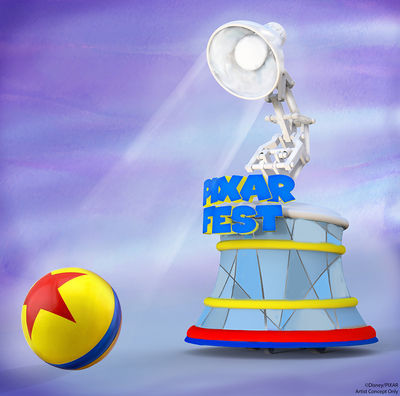 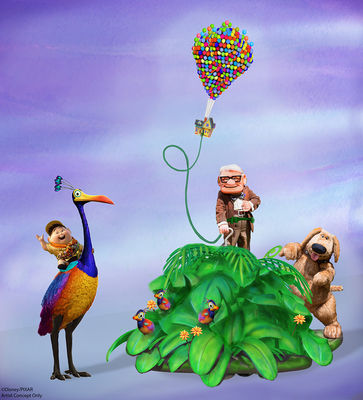 Russell, Kevin, Carl and Dug appear on the new Up unit from the Pixar Play Parade. Photo © Disney.

Farewell to the Candy Cane Man

As the popularity of Disneyland's freshly made candy canes has exploded in recent years, so too has risen the profile of master candy maker Rob McHargue. With his grandfatherly demeanor and generous smile, McHargue was a fixture of Disneyland's Candy Palace for over 40 years, and never more so than at Christmas, when his candy cane-striped neckerchief matched the colors of his most popular confection.

Last week, I received the sad news that McHargue had passed away. He leaves a legacy at Disneyland that few individual cast members can match. If you've ever peered through the glass windows to watch Disneyland's candy canes being made, there's a good chance you saw McHargue, either pulling the candy canes himself, or training the new generation of candy makers in the process. McHargue developed the recipes for many of the candy kitchen favorites, and was he was prominently featured in articles and videos about Disney's candy kitchens, including in a recent Orange Coast Magazine article for which I was also interviewed.

Rob McHargue was truly the face of Disneyland's Candy Palace, and I am honored to have had the opportunity to meet him, and later to even work with him on several occasions.

The tradition of buying Disneyland candy canes for my husband and friends has been of my favorite parts of the holiday season for nearly two decades, and with his passing I'm realizing how much of a role McHargue played in that experience. In the days before the candy cane dates were widely available, I would walk by the Candy Palace whenever I visited the Disneyland in early November, hoping to see him working in the kitchen. I'd catch his eye, then draw a candy cane shape in the air with a questioning expression on my face. He'd grin and come to the doorway, and give me the schedule if it had been finalized. When I visited on candy cane days, I always made it a point to stop by and watch the candy makers at work, and enjoyed watching him occasionally delight onlookers with samples of candy cane fragments between batches.

Years ago, I was assigned a cast member to serve as my media host during a press event. Out of his traditional costume, it took me longer than I care to admit to realize that this "Rob" was THE Rob McHargue. We spent most of the event chatting about his time at Disney, and his memories of the candy kitchen. He told me all about his favorite creations, but also about the new candy makers he was training to make candy canes over at Disney California Adventure, and to replace him when he eventually retired. He was extremely proud of them, and I trust that his techniques are safe in their hands. Still, he will be sorely missed, and my annual visit to the Candy Palace will be a touch less magical for his absence. I offer my heartfelt condolences to his family, friends and coworkers for their loss.

If you'd like a taste of Rob Mc Hargue's legacy, the freshly made, hand-pulled candy canes are available this week at Disneyland's Candy Palace on Monday, Wednesday, and Friday, and at Trolley Treats in Disney California Adventure on Tuesday, Thursday, and Saturday. For more information about the tradition, be sure to read our Guide to the Candy Canes at the Disneyland Resort.

...Reader Chris Patstone alerted us to reports of a fire in Downtown Disney Saturday night. Multiple reports on social media showed flames visible from behind the construction walls surrounding the new Splitsville bowling alley, under construction on the site of the former House of Blues location. A video posted to Twitter by user Brad Douglas clearly showed the fire was contained in a trash dumpster outside the building.

Downtown Disney used to be cool but now it's a total dumpster fire. pic.twitter.com/KTIWhsBwMr

According to Patch.com, the fire was extinguished in under 10 minutes, and there were no injuries reported. The site reports that the cause of the fire is under investigation, and there is no word on whether there was damage to the new building.

...The two college football teams competing in the 2018 Rose Bowl will appear at a Media Day event at Disneyland on December 27.

...Mark Twain Riverboat is closed Monday to Thursday this week, December 11–14, for refurbishment.

…Tickets are still available for the first Disneyland After Dark event, scheduled for Thursday, January 18. Tickets to this after-hours event are $95 per person, ages 3 and up, and do not include parking. No discounts apply. Purchase through the event website, or in person at Disneyland ticket booths. Disney California Adventure will remain open until 10:00 p.m. that evening.

The following attractions close January 8, 2018 as part of the Pixar Pier retheme. No reopening date is available at this time, and most of the locations will have new names when they return: