The Disneyland website updated this weekend to include calendar information for the weekend of June 23, the announced grand opening date for Pixar Pier at Disney California Adventure. The refurbishment schedule as currently posted poses some questions about exactly what will reopen that weekend, and which locations will remain closed until some later date. 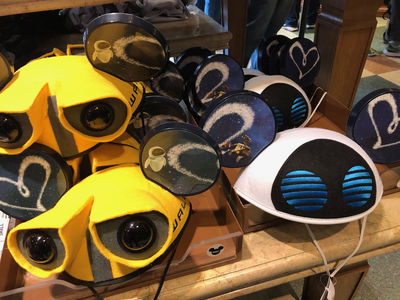 The Wall-E and Eve ear hats created for Pixar Fest are now available for sale at locations inside Disneyland and Disney California Adventure. Photo by Todd Pickering.

The calendar shows the Incredicoaster opening on Saturday, June 23 as previously announced. That is also the date the Cove Bar appears set to reopen, but the adjacent Ariel's Grotto restaurant is still listed as closed. This is likely a naming issue, as both the Cove Bar and Ariel's Grotto are merging into one new venue, the Lamplight Lounge. The Cove Bar reopened for Spring, and will close again on May 29 for the final phase of its transformation.

A name change may also be the reason Mickey's Fun Wheel is listed as closed beyond June 23. That ride will be renamed the Pixar Pal-A-Round, and at last check was still scheduled to open June 23.

The new Poultry Palace, Señor Buzz Churros, and Angry Dogs kiosks were also announced to open with Pixar Pier, but their former locations remain on the refurbishment list beyond June 23.

Two Disneyland Resort dining locations will change up their character meal offerings as of July 10, with Mickey changing restaurants, and a new crew heading to the Paradise Pier hotel.

The PCH Grill at the Paradise Pier hotel debuts Donald Duck’s Seaside Breakfast on July 10, replacing the current Surf's Up! Breakfast with Mickey and Friends. Donald, Daisy and Stitch are scheduled to appear at this meal.

Mickey and friends will now appear in the new Mickey’s Tales of Adventure Character Breakfast at the Storytellers Cafe in Disney's Grand Californian Hotel.

In addition, the Minnie & Friends – Breakfast in the Park is still offered daily at the Plaza Inn inside Disneyland. This meal usually features Minnie Mouse, Tigger, Captain Hook, and the Fairy Godmother.

Finally, Goofy’s Kitchen remains the most popular character meal at the resort, offering breakfast and dinner buffets. With the closure of Ariel's Grotto, Disney ended the only Princess-themed character meal offered on the West Coast, and thus far has not announced a new offering.

Discounted character dining vouchers are also available for purchase online in advance of your trip through MousePlanet sponsor Get Away Travel.

From the MousePlanet blog:

Last month, we came across a press release announcing that runners will be able to run the streets of Anaheim this Veteran's Day weekend, in a series of Heroes-themed races, visiting such Anaheim landmarks as the Convention Center, Angel Stadium, and the Honda Center.

"But wait," you say, "didn't runDisney put their West Coast events on hiatus?" They did—and now a newly formed "Run Anaheim" organization is looking to fill the vacuum. Run Anaheim is a division of the city's Sports Anaheim marketing group, which helps promote professional and amateur sporting events.

The inaugural Heroes Weekend includes a 10-mile run on Saturday November 10, and a 5K and 1K kids run on Sunday November 11, exactly one year after runDisney hosted its final Super Heroes Half Marathon weekend.

As this isn't a runDisney event, "Heroes" of this particular race aren't of the Marvel variety, but everyday heroes and community leaders.

"We founded heroes weekend to celebrate all of the hometown heroes in our lives that make a difference every day," says Roy Edmondson, vice president of Sports Anaheim. "We are looking forward to welcoming the community and beyond for a fun and healthy weekend to raise awareness and contributions to the area's heroes and charities."

The course maps for the 10-mile run and 5K are not yet published. All races start and end at the Honda Center, and it's likely the kids race will be entirely within the parking lot.

If the theme and weekend sound familiar, some other names may also ring a bell. Sports Anaheim hired Spectrum Sports Management to produce the event, and offers travel packages through GET Travel.

Spectrum Sports managed many of the runDisney events at the Disneyland Resort, and helped grow the brand from one weekend to four events per year. GET Travel is one of the travel providers for domestic runDisney events, and helps manage the Disneyland Paris race weekend. So while Run Anaheim is the new kid on the (starting) block, the event itself seems to be in the hands of seasoned race veterans.

Will runDisney fans, set adrift by Disney's hiatus, flock to this new Heroes offering, or will they wait until they can once again race through the Disney parks? Beyond that, if and when runDisney returns to the West Coast running scene, will Run Anaheim step aside and let Disney reclaim Veteran's Day weekend, or will the two entities compete for both road and runners?

When runDisney announced its hiatus last fall, we wrote how Disney cast members suggested that strained relations between the Disneyland Resort and the City of Anaheim might have factored into the decision to put West Coast events on hold. runDisney required the cooperation of Anaheim and neighboring Garden Grove to maintain street closures for race courses, which left Disney property, and to request CalTrans to close freeway off-ramps along the course. The Los Angeles Times reported on then-recent changes to Anaheim's City Council, and suggested that the city is being less cooperative with Disney on several fronts. "Anaheim is making it very difficult for us, that's for sure," said one person familiar with West Coast race operations. 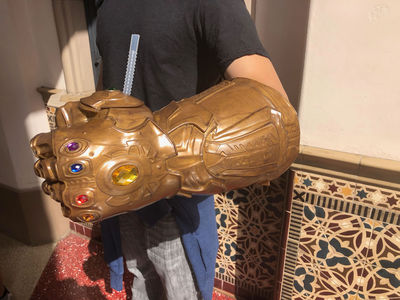 The Infinity Gauntlet souvenir sipper sold out over the weekend, but more inventory is expected this week. Photo by Todd Pickering.

...Disney's popcorn buckets and souvenir cups are extremely popular collectibles, and there was a surprise release this weekend of a new souvenir sipper based on Avengers: Infinity War. The new beverage holder is a replica of the Infinity Gauntlet, complete with six colored stones, and is designed to be worn on the arm. The beverage compartment is located inside the fist, with a straw near the thumb.

...World of Color is scheduled to return on Friday, June 22. As of this publication, the schedule lists only one show each night at 10:15 p.m., following an 8:50 p.m. performance of the Paint the Night parade.

...The Alamo Rent A Car office currently located in Downtown Disney will relocate to the Paradise Pier Hotel, according to building permits filed with the city of Anaheim. The new office will be located inside a first-floor room which currently houses a group of vending machines.

The following attractions closed January 8 as part of the Pixar Pier retheme. Pixar Pier reopens June 23, and most of the locations will have new names when they return:

The following dates denote when are scheduled to close by, as Disney begins construction of a sourth hotel on the west side of Downtown Disney: