Get ready to deck the halls with a season of returning seasonal offerings when Holiday Time at the Disneyland Resort begins on Friday, November 7. The 2018 holiday promotion will feature most—but not all—of the attractions, decorations, and entertainment from the past several seasons.

At Disneyland, returning classics include A Christmas Fantasy Parade, “Believe … in Holiday Magic” fireworks, "it's a small world" Holiday, and the Sleeping Beauty’s Winter Castle projection show. The Haunted Mansion Holiday, which opens in September for Halloween Time, also runs through the end of Holiday Time.

Missing again is the Jingle Cruise, which was last presented at the Disneyland Resort during the 2016 holiday season.

Luigi’s Joy to the Whirl and Mater’s Jingle Jamboree return to Disney California Adventure this year, part of the popular Cars Land holiday overlay. Santa Claus takes up residence again inside the Redwood Creek Challenge Trail. Missing from Disney's holiday announcement was any mention of World of Color, and it seems unlikely the show will return from its extended refurbishment in time to present the Season of Light version this year.

Holiday Time at the Disneyland Resort brings a return of the popular Festival of Holidays promotion at Disney California Adventure. The multi-cultural celebration gets a slightly extended run this year, closing two days after the holiday season wraps up at Disneyland. The extra days allow DCA to include Three Kings Day festivities before packing the booths away for the season.

The Disneyland Resort last week reached an agreement with its largest labor unions for a three-year deal that will raise the hourly minimum wage to $15.45 by June, 2020. The new contract provides for an immediate increase in hourly minimum wage to $13.25 for all covered employees. That jumps to $15 per hour on January 1, 2019, with negotiated annual raises for those cast members who were already at or above the new hourly minimum rate.

“Disneyland Resort has long taken pride in providing an exceptional employee experience, and this agreement sets a new bar with minimum wages that are among the highest in the country. Our unprecedented offer shows our commitment and care for our cast members and is the largest increase in our history,” said Josh D’Amaro, president, Disneyland Resort. “Our cast members are at the heart of making our guests’ dreams come true and this meaningful pay increase reflects the valuable roles they play at the resort.”

Over a third of all Disneyland Resort cast members are represented by the four unions that comprise the Master Services Council.

The contract agreement comes as Anaheim residents prepare to vote on a controversial minimum wage ballot measure in the November general election. The union-backed initiative would require businesses in the designated Anaheim Resort Area that receive subsidies from the City of Anaheim to pay their workers a minimum wage of $15 by January 2019, increasing $1 per hour each year through 2022.

If approved, the Anaheim minimum-wage measure will apply to all hourly workers regardless of union representation. Disney is still in contract negotiations with UNITE-HERE Local 11, a union that represents another 2,700 cast members at the Disneyland Resort hotels, and which was instrumental in collecting signatures to qualify the measure for the November general election.

Opponents of the measure call it a "job killer," and The Orange County Register reported in June that both Disney and the Wincome Group might cancel planned Anaheim Resort Area hotel development projects if the measure passes.

There is quite a bit of rumor and speculation as to exactly what is holding up the planned demolition of Downtown Disney's west side. Is it due to a 1970s-era gas station, buried and possibly forgotten under a parking lot behind the AMC Theater, as reported by LaughingPlace.com? Is Disney waiting for the November general election before proceeding with its new luxury hotel development, as discussed above? Or is there some other reason that work seems to have stalled? 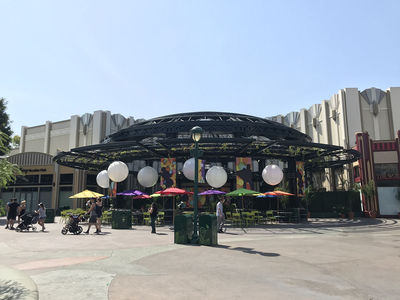 The former AMC Theater courtyard has been decorated and furnished by Disney to serve as a seating area. Photo by Adrienne Vincent-Phoenix. 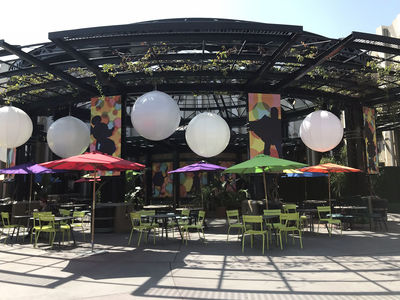 Banners with Disney characters against colorful backdrops hang from the arbor, and cover the windows of the former AMC Theater box office. Photo by Adrienne Vincent-Phoenix.

Whatever the full story, the fact remain that there are now three very large, very empty buildings between the Disneyland Hotel and the Monorail, and thousands of Disneyland Resort visitors looking to grab a bite in a shopping district that has seen no fewer than six eateries close—for refurbishment or for good—in the past two months.

Enter the food trucks. This past weekend, Disney—which has used mobile eateries to add dining capacity to Downtown Disney before this—has once again called a few trucks into service. Visitors posted photos to social media on Friday morning of new decorations, tables and chairs set up in the courtyard of the former AMC Theater, and by the afternoon, trucks from Habit Burger, Brew Wings, and Afters ice cream had arrived.

Disney also announced Aloha Fridays through the end of summer, with live entertainment on the Downtown Disney stage near the former ESPN Zone. 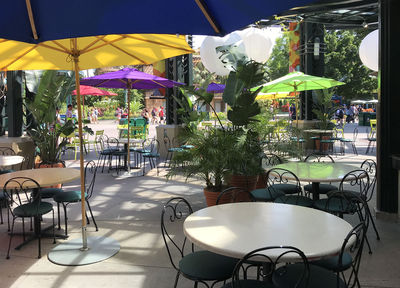 First-time visitors to Walt Disney World's Animal Kingdom are often surprised to learn that the park does not provide plastic straws or cup lids, instead offering paper straws to customers who request them. Along with a park-wide ban on balloons, Disney says the policy helps ensure the safety of the animals that live in the park.

Of course, the rule is also one of the small ways that Animal Kingdom helps spread a message of environmental awareness, and it's a message that Disney is ready to share around the world. The company last week announced that it will "eliminate single-use plastic straws and plastic stirrers at all owned and operated locations across the globe, amounting to a reduction of more than 175 million straws and 13 million stirrers annually."

The policy applies to all Disney theme parks and resorts, as well as the Disney Cruise Line and Disney Vacation Club properties. Other changes to come include refillable in-room amenities at Disney hotels and on the cruise ships, which means your H20-branded shampoo and conditioner will come from large bottles mounted inside your shower, and not tiny bottles left by housekeeping. Disney began the switch to bulk toiletries at least a year ago in some newly renovated Walt Disney World Resort Hotels.

...Based on permits filed with the City of Anaheim, it appears Disney is preparing for an expansion of Whitewater Snacks at Disney's Grand Californian Hotel. It looks like the restaurant, referred to as "White Water Grill & Bar" in the permits, will get a outdoor seating area with a new outdoor bar.

All these Downtown Disney businesses west of the Monorail beam have closed and will be demolished, as Disney begins construction of a fourth hotel: