I sense some skepticism, but if you're a Disney merchandise fan, there arguably isn't a more impressive collection of shops anywhere, on property or otherwise. Unless you're looking for something very specific, it's likely you'll find what you're looking for somewhere along this (now thankfully Big Sorcerer Hatless) thoroughfare. Fun items for both adults and kids, in many different price ranges, are all available. Let's take a stroll down the lane and see what we can find.

This entire part of the park has an Art Deco vibe, meant to be reminiscent of the 1930s and the original park mission of "the Hollywood that never was." The shops along the way all keep that theme, which is nice to see.

Crossroads of the World

The first thing you see as you pass through the turnstiles of Disney Hollywood Studios is the Crossroads of the World. 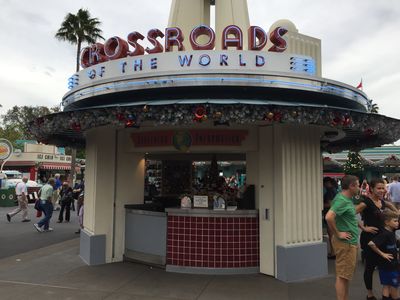 Crossroads of the World is right at the park entrance and carries basic needs. Photo by Gregg Jacobs.

The main purpose of Crossroads becomes obvious immediately: a quick chance to grab the things you forgot at home in your hotel room. If you need sunglasses or suntan lotion to protect you from the Florida sun, they have you covered. They also sell small souvenirs like keychains and cheaper plush. The other item they're known for is light-up toys, such as glow sticks, glowing necklaces, and the toys that light up and twirl when you push a button. These are available all day, but come out in force once the sun sets so the kiddies have them for the parades and nighttime spectaculars.

To the right of Crossroads as you face the Chinese Theater is Classic Car Souvenirs. The building is done in the design of an old time gas station, and cleverly following the auto theme, this is where you rent "vehicles," such as strollers, wheelchairs and electric vehicles (scooters). 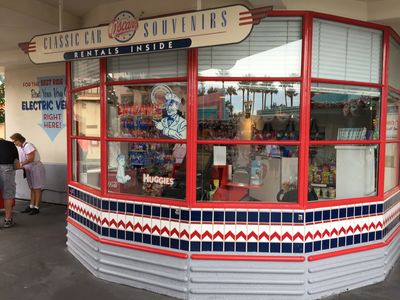 Similar to Crossroads, the offerings here are the basics and things you may have forgotten. They have a lot of candy and small toys for the kids. This is also a great place to pick up autograph books so you have them as you enter the park proper. You never know who you may run into.

Continuing on, the next shop you hit is The Darkroom, which interestingly sells little to no camera stuff (though there are a few accessories tucked here and there if you lose a lens cap). I remember this shop many years ago being loaded with instant cameras and film. It's kind of incredible how much technology has changed. 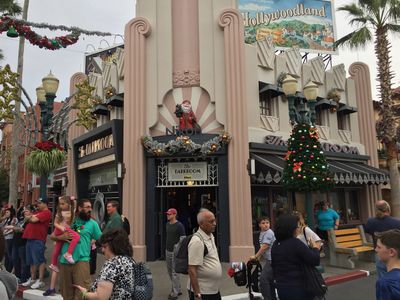 The essentially cameraless The Darkoom sits at the beginning of Hollywood Boulevard. Photo by Gregg Jacobs.

What The Darkroom now does have is a dizzying array of collectible pins. In fact, this might be largest selection of pins on property outside of Disney Springs' Disney Pin Traders. There's a massive wall with pins in all prices ranges organized by size, subject matter and price (prices range from $6.99 to $25 and up). 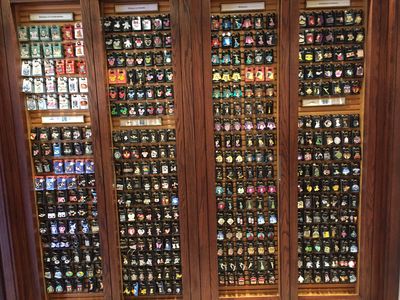 The Darkroom has a massive section of collectible pins. Photo by Gregg Jacobs.

The Darkroom is also the Hollywood Studios home of D-Tech. You simply go to the kiosk and can choose from hundreds of images to put on a MagicBand or cell phone case ($32.95 for a custom cell phone case). There are also a ton of pre-made cell phone and tablet cases available, as well as other accessories. Read here for a slightly deeper dive into D-Tech. 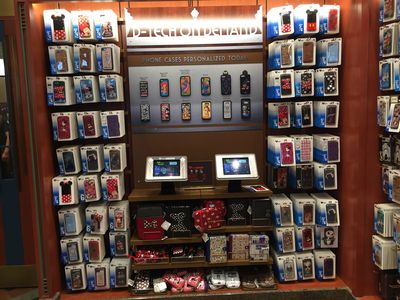 The large D-Tech display at The Darkroom. Photo by Gregg Jacobs.

As we continue our tour, In typical Disney fashion, you don't even have to go outside to enter the next store, the Celebrity 5 and 10. The original mission of this shop was to mimic the old Woolworth stores, selling very inexpensive goods, not unlike the $5 and $10 pop-up shops we see at Disney Springs. Over time, its evolved into what it is now, a space with a continually rotating selection of goods that changes with the season, and oh yeah, it's a great place to go for housewares. 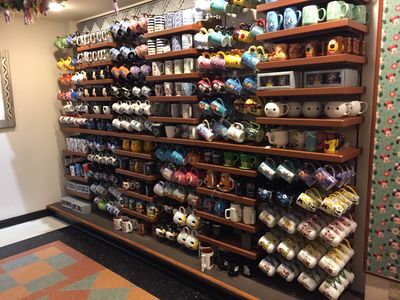 The Celebrity Five and Dime has a great wall of mugs. Photo by Gregg Jacobs.

The shop has an incredibly large wall of mugs that come in all shapes and sizes. A particular favorite on my last visit featured Baymax from Big Hero 6, yours for only $12.95. Beyond mugs, there's usually a pretty good selection of other Disney housewares, such as plates, silverware and even tablecloths. 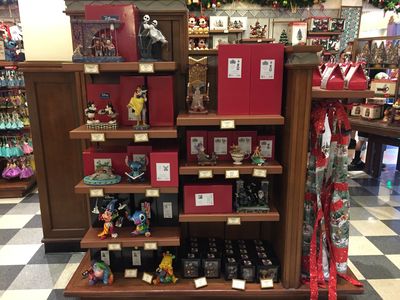 The shop has a great selection of collectible figurines. Photo by Gregg Jacobs.

This is also the place to visit if you want some great Disney collectibles, mainly figurines. On a recent visit, the had figurines from the Britto collection as well as Disney Classics, Precious Moments and Enesco.

The key point about the 5 & 10 is that there's constantly rotating merchandise based on the time of year or whatever celebration or new property Disney has going, so the shop warrants repeated visits.

You then continue to walk through the building and you hit Adrian and Edith's Head to Toe. I've mentioned Adrian's in past articles for good reason. It's one of the only locations on property where you can get custom embroidery. They sell those crazy cool Mickey Mouse ear hats, baseball caps, holiday stockings and dish towels. For a relatively small fee (approximately $9 depending on item and length) they will take the items and embroider a personalized name on them for you.

They will also embroider items for you that you've purchased elsewhere on property for the same fee. A few years ago, I bought a holiday stocking (fine, it was for my dog) at Disney Days of Christmas which no longer did embroidery. They suggested Adrian and Edith's, and I figured it was faster to just bring it there myself. They took care of the embroidery and shipped it to my Disney resort the next day by noon. Adrian's is currently undergoing a refurbishment as part of the Hollywood Studios overhaul (visit The Darkroom for the headwear and embroidery). I can't wait to see what the new place looks like.

After Adrian's, you must then actually go outside on to the street. The next venue you encounter is The Trolley Car Cafe, a.k.a. Starbucks. I won't comment on the coffee or delicious cakes they sell, but if you want to shop there, they do have you covered. The sell mugs from various Starbucks series that have Hollywood Studios images. Trolley's counterparts at the other parks also sell the mugs, each with images of their respective parks. The series I saw there recently is the same series I saw at Starbucks in Beijing, Paris, and London, so if you're into coffee or Starbucks and want the whole collection, visit Trolley Car for a purchase.

After getting your caffeine pick-me-up at Starbucks, you cross the street before hitting the park's main hub to come to what I like the call the fancy store on the street, Keystone Clothiers. 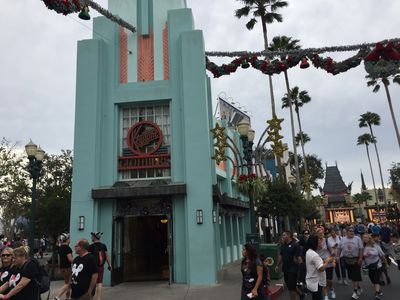 Keystone Clothiers is where you get Hollywood fancy wear. Photo by Gregg Jacobs.

True to its name, Keystone is loaded with great Disney clothing. I've sung this shop's praises before, because of the unique clothing it sells as well as one of the best T-shirt selections on property. If you love golf, this is where you go to buy "understated" Disney golf shirts, the polo type shirts with Mickey Mouse swinging a golf club on the chest. Following that theme, they also sell golf shorts and even golf balls (of course, with Disney character images on them).

They sell all manner of Disney clothing. This includes sleepwear, sweatshirts and tons of Ts. At the far end of the store, there's a wall of T-shirts with all kind of characters, rides, and subjects, including a few I wasn't able to find elsewhere (my favorite featured Up's Dug with the world "squirrel"). They have a wide selection of those fancy socks that all the kids (aged 6 to 94) are wearing these days, many of which feature park icons, such as the monorail or Expedition Everest's Yeti. 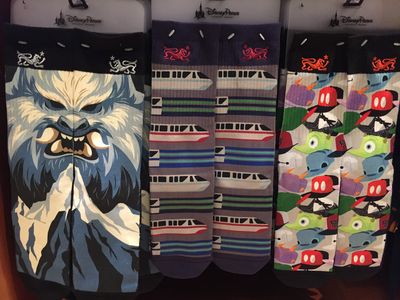 They have a wide selection of the crazy socks that are popular these days. Photo by Gregg Jacobs.

The store also has interesting footwear. They have sneakers with subtle, and not-so-subtle character images on them as well as the Crocs with the Mickey Mouse logo we've seen around for the last few years. 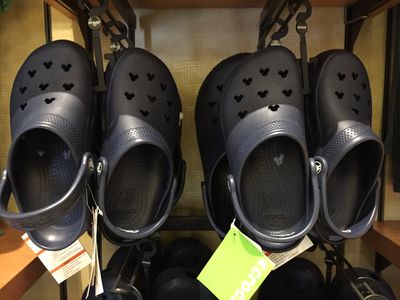 Keystone Clothiers also has a rotating selection of shirts, so again, it's a place worth visiting over and over again.

We now leave Keystone and walk further back towards the entrance to get to the last stop on our tour, Disney & Co. 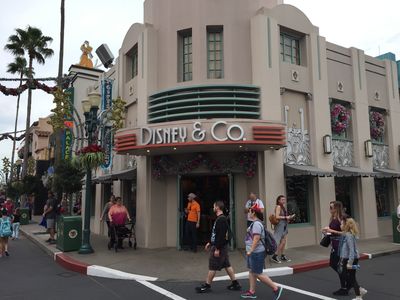 Disney & Co. is the Emporium of Disney Hollywood Studios. Photo by Gregg Jacobs.

Disney & Co. is essentially the Emporium of Disney Hollywood Studios, in that it's the entrance shop with the widest selection of good. I'll qualify that a bit by saying that really the entire block serves the "Emporium space" here as this shop is much smaller that the Magic Kingdom behemoth.

This is the best place in the park to buy park logo and WDW logo merchandise. Near the entrance of the shop are walls and racks of logo picture frames, clothing and ornaments. 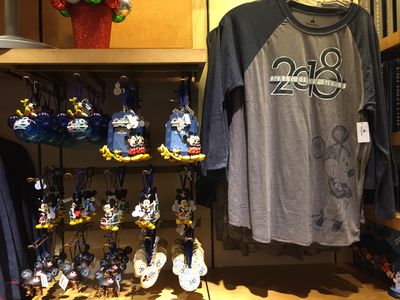 This is the place to buy logo merchandise. Photo by Gregg Jacobs.

Like many other Disney shops, including several I mentioned previously, Disney puts merchandise related to whatever property it's trying to push front and center. On my last visit, there was a large display of Star Wars items near one of the entrances, including shirts, plush and action figures. With Galaxy's Edge coming in 2019 (no, I can't wait either), I imagine Hollywood Boulevard will be featuring Star Wars merchandise for quite a while. 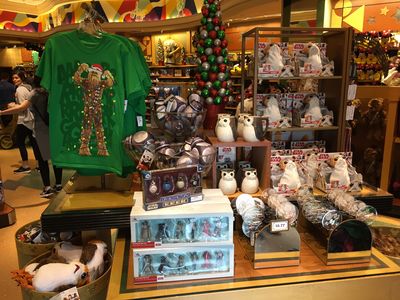 A display of "Star Wars" items stood right by the entrance. Photo by Gregg Jacobs.

If plush is your thing, Disney & Co is plush central for Disney Hollywood Studios. There's a large area dedicated to our stuffed friends, and you can buy any Disney classic character as well as those from Disney animated films (characters from Monsters, Inc., the Aristocats and Alice in Wonderland were on display during my visit). 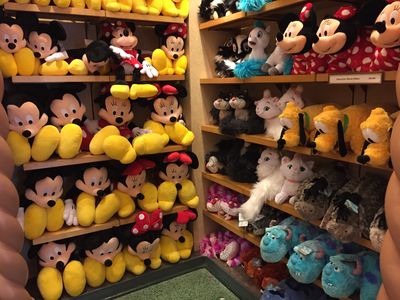 Make sure to visit the plush corner. Photo by Gregg Jacobs.

There isn't much that you can't find on Hollywood Boulevard, which is why I refered to it as one of Walt Disney World's, and the world in general's, great shopping streets at the top of the article. The street sadly has undergone a bit of the homogenization of Disney Parks shops (for example, the five and dime used to have a lot of low-priced five-and-dime type items and now blends in a bit more with the other shops), but like a lot of the rest of property, has reversed that trend a bit in recent years.

If Disney Hollywood Studios is the only part on your itinerary or if it's your last stop, and you—heaven forbid—forgot to pick up everything you wanted, you needn't worry. The shops along Hollywood Boulevard have you covered.