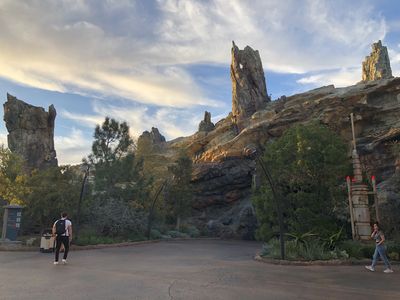 You are not in a land as much as you are off world when visiting Star Wars: Galaxy's Edge. Photo by Todd Pickering.

It's finally here. As of January 17, Disneyland's newest land, Star Wars: Galaxy's Edge opened its most ambitious attraction, Star Wars: Rise of the Resistance, making this land finally complete. We have heard so many people making judgements on its success since the opening and feel that it is time to address the best way to enjoy the new land and the innovative and refreshing way Disney is trying to brand it. We attended opening day, media events, and opening day of Star Wars: Rise of the Resistance and were lucky enough to get on the attraction. There are so many ways to warp to light speed and enjoy Star Wars: Galaxy's Edge. 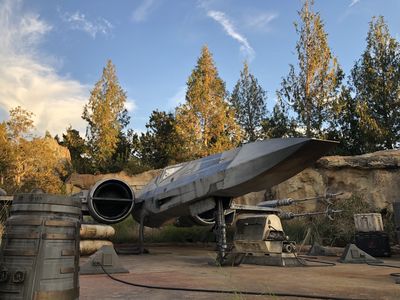 The Resistance is getting ready to go on and adventure and you are invited. Photo by Todd Pickering.

It is interesting to note that as of January 17 the Disneyland Guide Map lists Savi's Workshop and the Droid Depot (where you can respectively purchase a high-end customized light saber and droid) as attractions. They also released a pamphlet that is a "Provision & Merchant Guide" with more in-depth descriptions of food, merchandise, Savi's Workshop and the Droid Depot. For these two attractions it states that reservations and walk-ins are available. Reservations can be made 60 days in advance and are highly recommended of course. 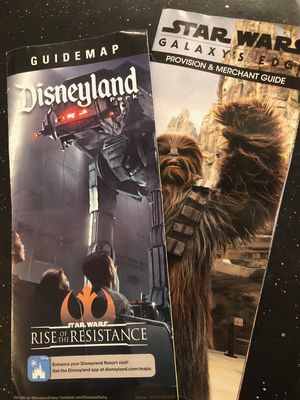 Since George Lucas made millions off of the merchandising of the original film, the Star Wars properties have been linked from day-one to merchandise and the adult collectors have been mercilessly made fun of by the likes of comedians and television shows like Saturday Night Live. So it is by no means a stretch at all for Disney to label these two places as "attractions" where guests spend a considerable amount of money in addition to park admission. The droids can be programmed with different personality chips so they react to all sorts of things at Black Spire Outpost. For example, if you program your droid to be part of the New Order it chirps happily in the city where the Stormtroopers patrol but if you take him to the Resistance outpost outside of the city center he chirps quite discontentedly. You can buy a pouch to carry your droid not unlike a Baby Bjorn so your hands are free to wield a light saber and the other hand to drink your Blue Milk. We have yet to find an owner of either these items that has not said the experience and price tag was completely well worth it. 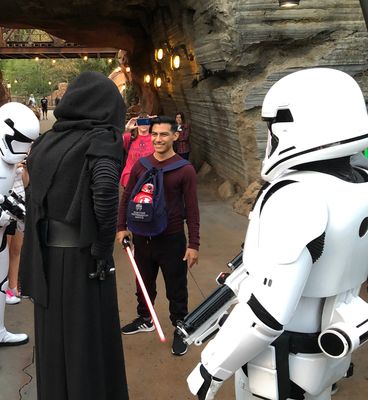 We spoke with Julian Perez who was sporting a light saber and a droid. He had just custom made his droid and had it in one of the droid carriers. He also had a light saber that we found out he had purchased on a past trip. He brings his light saber to Disneyland every time he intends to go off world and enjoy Batuu. When Kylo Ren approached him and questioned him about why he is carrying an illegal light saber the smile on his face really said it all. Even the most hardened heart cannot help but smile at the multitude of light sabers lighting up the night in front of the Millennium Falcon. If it isn't in the budget and/or you may not be a fan all you have to do is look over your shoulder to see someone with one of these items enjoying the land to the fullest. 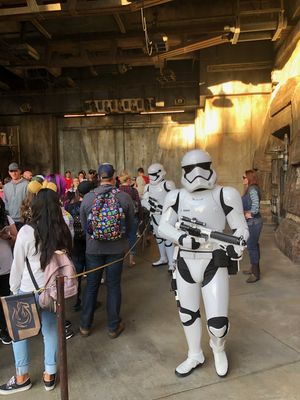 The Entertainment Guide in 2020 (usually at entrance gates or custodial staff carries them) says simply; "Explore Black Spire Outpost on the Planet Batuu - While visiting the planet, Stormtroopers will be ensuring compliance throughout your stay. Keep a sharp lookout for Chewbacca, Rey or Vi Moradi." 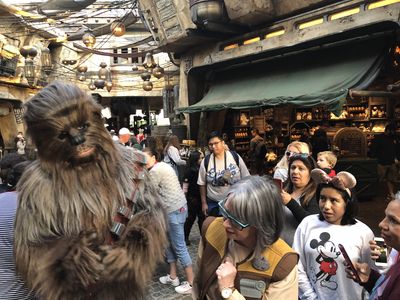 Chewbacca walks in the market. Photo by Todd Pickering.

Chewbacca was spotted in the market and keep in mind that they do not pose for pictures as they are always moving about. Snap a quick selfie if that is your goal but the actual entertainment is interacting with these iconic characters. The handlers are just as fun as the characters as she speaks Wookie and interacts with Chewbacca. Even every cast member lives on the planet and have great stories to tell. Don't hold up the queues chatting with them while buying Blue Milk but if they are not busy it is great fun to chat with them about living on Batuu. 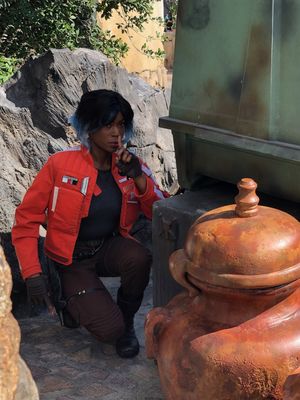 Helping Vi Moradi escape the Stormtroopers. It's great being part of the adventure. Photo by Todd Pickering.

We also spotted Vi Moradi spying around the city center with Stormtroopers lurking about. We snapped this picture with our "data pad" (that is what Batuu denizens call our mobile phones) and she shushed us not to reveal her location so we immediately deflected the Stormtroopers and got in their way...she then scurried off behind us and thanking us. Another example of living the adventure. 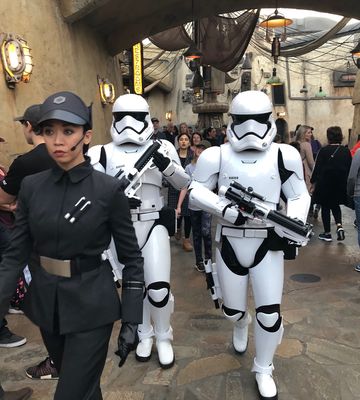 The New Order and Stormtroopers head out to address the people of Black Spire Outpost. Photo by Todd Pickering.

The Entertainment Guide also states "The First Order Searches for the Resistance-Be on the alert for patrols from the First Order." The latter usually means an officer of the New Order along with two Stormtroopers and also Kylo Ren. Kylo Ren makes an entrance coming out of his ship and punishing the officer for not finding the Resistance and then heads into the crowd to interrogate people. Just following him about is great fun even if you are an introvert. You can hang back and just watch the fun. We observed a family of four being interrogated and the older brother had to comfort his younger brother who was clearly scared. It was just delightful and it is one of the moments that can make great memories from your visit. We also observed a man off to the side eating his sandwich. He was entirely unintimidated by Kylo Ren's presence and when asked if he knew where any Resistance spies might be he slowly and assuredly pointed right into the crowd. The crowd went wild. 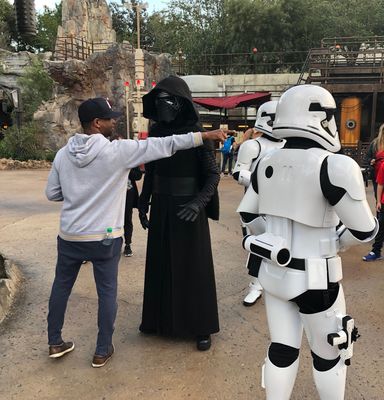 As of late R2D2 seems to be a regular and his handler is just a delight as they communicate. Following them for a while is so much fun to see R2 sneak up on people and then see the excitement at meeting one of the most famous droids ever. Once again the handler is just as fascinating to watch and hear as the blurts and bleeps from R2. We suspect he may become more of a regular fixture or maybe due to electronic issues he simply isn't listed in the Entertainment Guide so as not to disappoint. Whatever the reason we feel that we will only see more and more characters as the days go on in this newest land. 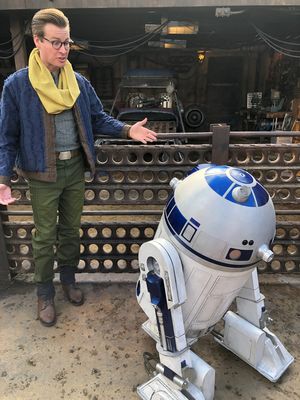 R2D2 has also been spotted at Black Spire Outpost these days. Photo by Todd Pickering.

My friend Steve Lewis joined me on opening day for Star Wars: Rise of the Resistance and we got boarding group number 96 which was a stand-by group. To read more about getting a boarding pass just click here and this will re-direct you to our article. For those of you who just cannot wait, our very own Alan Dalinka created a full ride-through video you may watch but even that does not do it justice. No spoiler alerts in this article but it must be experienced to truly get the full effect. There is a great deal of human characters in this attraction making it quite a show. Kudos to Disney and the amazing cast members that are doing a fantastic job. We hope this energy can be maintained for years. This is a game changer on how the land will now be perceived. 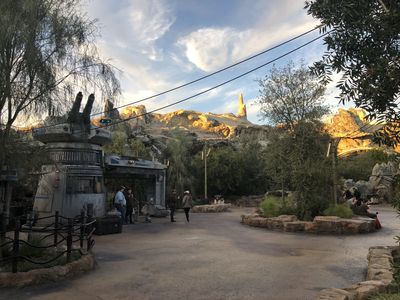 This view in front of Star Wars: Rise of the Resistance is a thing of the past. Photo by Todd Pickering.

The energy it has brought to that part of the land is amazing. The anticipation of boarding and the excitement upon exiting fills that side of the land with shouts of glee. If you have never seen any Star Wars film at all you will still be transported and it will temper anything you do after that. Steve stated that walking around Black Spire Outpost is not like being on a movie set at all...it is like being in a movie. The sound effects are different for early morning than they are at dusk whether you be in the market or out in the forest. The way the light hits the Market as the sun sets is astounding. The way things are lit up at night are also very different than the daylight hours. The disappointment that people feel when they do not get a boarding pass will indeed factor in to your enjoyment of the land but every day they seem to be increasing the capacity and hopefully the malfunctions and kinks will just keep getting worked out. 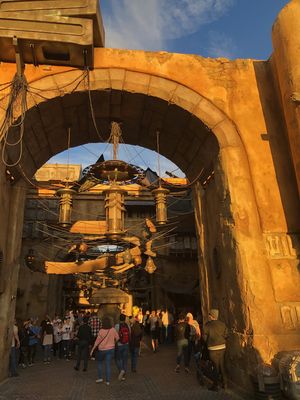 The sunset on the Market is just stunning. Photo by Todd Pickering.

Whether you go into the land with reservations to build a droid, get a light saber, have drinks at Oga's Cantina, and have seen all the films hundreds of times or have never seen even a movie you will have fun. We couldn't help but say "Bright Suns" (Batuu for "Good Morning") and "May the Force be With You" even with the crazy crowds of opening day.