Once again, I'm writing an article while sympathizing with my fellow Disney fans, stuck at home dreaming of a visit to the Disney theme parks. I'm thinking about that visit to Orlando, when in actuality the big excitement in my life is that after four long months, I finally get to go get a haircut this weekend (and I'm not kidding—I'm really excited about the haircut!).

Like many of you, I spend part of each day thinking about Disney and ways keep the magic alive until that next trip. I've done some Disney online shopping. I've taken some time to revisit my own collection and reminisce about old vacations. I also read Mouseplanet incessantly and talk everyone's ear off about the latest gossip on the theme parks openings and how that will work.

Something else I've been doing a lot more of lately is cooking. Since restaurants have been essentially closed, we've had to eat at home more often, so I've been pulling out old cookbooks, making old favorites. and—like many of you, I'm sure—have been swapping recipes with family and friends.

The idea for this article came about from a combination of all this kitchen activity and a text from my little sister. It occurred to me that Disney merchandise doesn't necessarily have to sit on a shelf or be worn on your body—it can also help out in the kitchen! There are Disney-inspired kitchen gadgets ranging from those you'll use everyday (we all need a toaster) to those that will just make you laugh every time you look at them.

So today, we take a look at some of these items, and I'll let you know how to bring some cooking magic into your home for breakfast, lunch, dinner, coffee, and dessert.

Let's start with breakfast, a bit of background on the first item, and that text from my sister.

There are many food items from Walt Disney World and Disneyland that I love, but one of my and my entire extended family's absolute favorites are Mickey Mouse waffles. You can get these small, doughy, heavenly items, shaped like Mickey's head, at pretty much any park restaurant that serves breakfast. Our two favorite locations to get these are the buffets at Magic Kingdom's Crystal Palace and Chef Mickey's at the Contemporary Resort (make your reservations months in advance for this one, even under normal circumstances).

My sister read online the name of the company that sells Disney their waffle and pancake mix. The name of the outfit is Golden Malted, and they'll sell to you online just like they'll sell to Disney—just likely in much smaller quantities unless you have a very large family or are abnormally hungry. A single six-cup package (that in my experience, makes about 50 waffles) will run you $9.98 plus shipping. If you buy more packages, the price per package goes down. 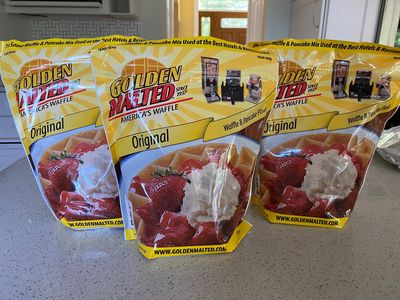 You can buy the very same waffle mix that Disney uses from Golden Malted. Photo by Gregg Jacobs.

So, since we had the waffle mix, we of course needed a waffle maker. Disney just so happens to have one that allows you to make Mickey waffles in the exact same shape as at the parks, so my brother, sister, and I each bought one. It has top and bottom compartments that make three waffles each at a time, and which features Mickey's face on the outside of the top and his familiar shorts on the bottom. We bought them from Shopdisney.com. The price was $74.95, but a 15% off coupon and free shipping brought that price down. 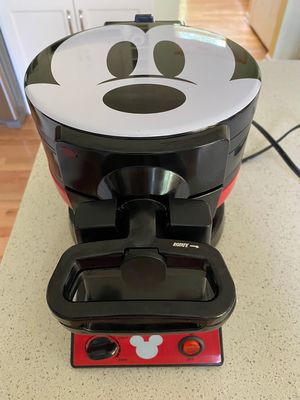 You can make Mickey Mouse waffles at home with a familiar smiling face looking up at you. Photo by Gregg Jacobs. 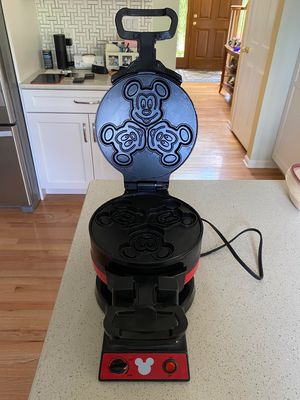 You can make six waffles at a time. Photo by Gregg Jacobs.

We made the waffles, and I have to say, they weren't that difficult to make, and tasted an awful lot like the real thing. I just checked Shopdisney, and they seemed to be out of them, but Box Lunch did have them on sale, so you can make your own. 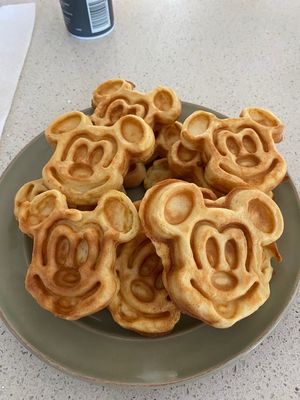 We had a Disney Parks treat at home. Photo by Gregg Jacobs.

If you like waffles, but prefer them in a different Disney shape, Shopdisney.com has them themed to R2D2, the Avengers, Frozen 2 and Toy Story. I reached out to fellow Mouseplaneteers Chris Barry and Todd King to see what their favorites were, and they're also waffle/pancake fans and have their own Disney machines featuring Winnie the Pooh and Tigger and Mickey Mouse. 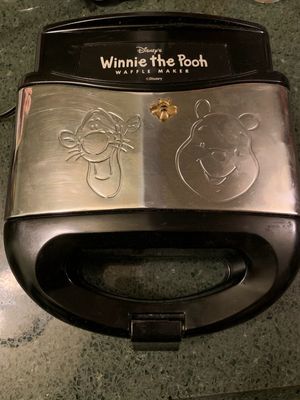 You can make waffles with Winnie the Pooh and Tigger. Photo by Chris Barry. 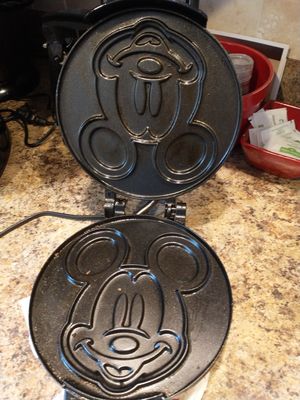 ...or pancakes with Mickey Mouse. Photo by Todd King.

The Golden Malted or any other waffle mix you may have in your house will work with all of these.

There's another appliance that's a staple in every kitchen: the common toaster. That simple stainless steel device that gives you a nice toasted piece of bread to go with your eggs in the morning. But does it have to be common? It does not! Years ago, I had a toaster with a Mickey Mouse image on the side. That was cool, but the really fun features were the fact that it burned Mickey's image into the side of your toast, and it played the theme from "it's a small world" when it was done. Sadly, it has long gone into the great toaster heaven in the sky.

I wasn't able to find that one, but there are many Disney-themed toasters on the market right now. My favorite one is bright red, has Mickey's image on the side and does, in fact, burn a Mickey silhouette into your toast. It does two slices at a time and can be yours at Shopdisney.com for the low price of $24.95, less any coupons you may have (feel free to point any questions to Mr. Barry, who's lucky enough to have one). 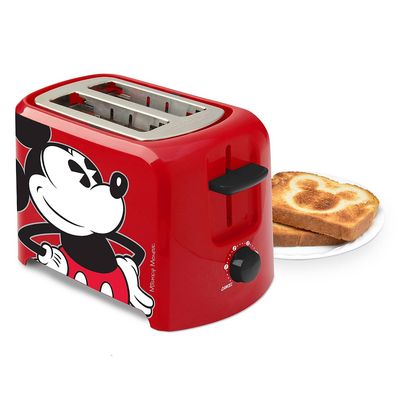 Moving on from breakfast to lunch and/or dinner, if you're busy during the day, you might just want a set-it-and-forget-it gadget—something like maybe a slow cooker. Now, you could use your old boring version, or you could add a little Nightmare Before Christmas to your kitchen.

That's right. Box Lunch has a seven-quart slow cooker with black-and-white images of all your favorite characters from the film (that looks awfully like a Crock-Pot, except for the pumpkins, ghosts, and Oogie Boogie). This cooker is available from Shopdisney.com for $49.95. Believe it or not, there's actually another Nightmare cooker available from Box Lunch for $49.90, though as I write this, it's on sale for $37.42. It's the same idea, but has a different design. 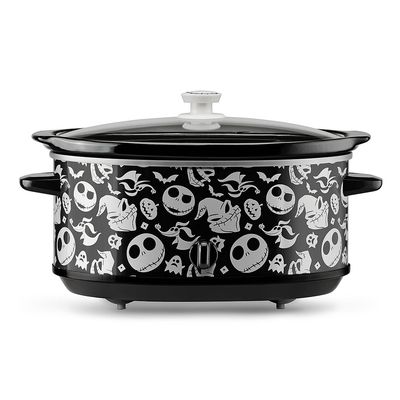 Ever think Jack Skellington would be on a slow cooker? © Disney.

If you want a Disney slow cooker and Jack Skellington isn't your cup of tea, there are cookers featuring characters from Toy Story, Star Wars, Cars, the Pixar films, and Lilo & Stitch. If you love Mickey Mouse, of course he has a cooker too.

So far we've discussed how to make breakfast and lunch/dinner with the help of our Disney friends. What if you just want a simple cup of coffee? Mickey Mouse can assist with that, too. Again at Shopdisney.com, they have a single cup Mickey coffee maker that comes with a matching mug. It sells for $24.95. 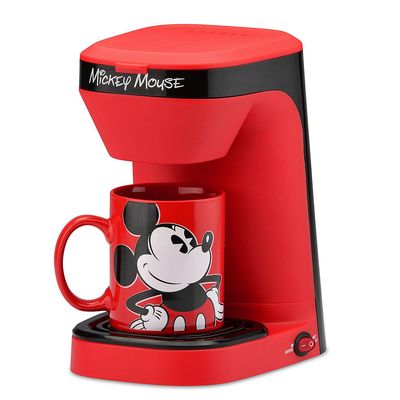 Mickey Mouse can help with your coffee in the morning. © Disney.

Now what if you'd like to make dessert?  I cast a search for a Disney mixer and couldn't find one. That said, I did find a way to Disneyfy (is that a word?) your mixer. On Etsy, I found several sites that sold vinyl decals specifically designed to dress up your mixer. These are inexpensive and definitely would do the trick. Check out here and here.

To help you will call your cooking needs, you need a good set of measuring cups, right. Again, at Shopdisney.com, there's a set of Mickey Mouse measuring spoons—the really cool silicone collapsible kind that don't take up a lot of room in your cabinets. 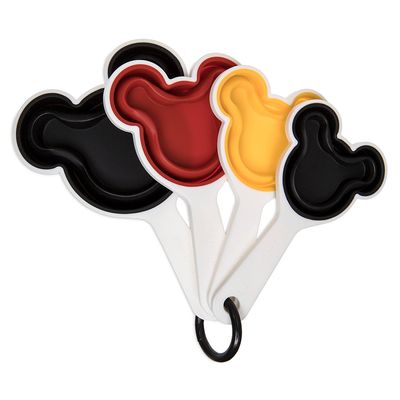 Measuring spoons are a colorful way to slyly bring Mickey Mouse into the kitchen. Photo by Gregg Jacobs.

They go for $19.99 and are a semi-subtle way to bring Mickey into the kitchen.

Last item I'm going to write about is one of my favorites. Recently, I bought a Mickey Mouse kitchen wall clock that includes a very unique feature. We have several Amazon Echo smart home devices in our home, including one in the kitchen. It's a great way to quickly find out what the weather is, play a song I get an impulse to hear, and to find out what else that actor in the movie we happen to be watching has been in. It's also often used as a timer when I'm cooking. It works great, but what was less than ideal is that I couldn't tell how much time was left on the time until I asked. That's no longer a problem. 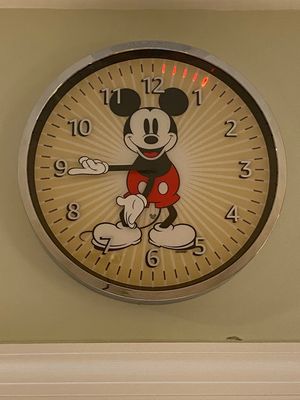 It's both a Mickey Mouse kitchen clock and a kitchen timer. Photo by Gregg Jacobs.

My new clock is paired with the Echo, so when I set a timer, the remaining minutes light up in red around the outside of the clock and count down as the time progresses. When the time's up, I hear the Echo go off and the clock flashes to let me know. The clock is for sale on Amazon for $49.95, though I've frequently seen it on sale—so feel free to try the trick of adding it to your cart and watching the price.

OK, so now you have a bunch of ways to invite Disney into your kitchen, for breakfast, lunch/dinner, coffee, and dessert. Want to hear about other ways to cook Disney style? I suggest you check out Alan Dalinka's Fun at Home shows. Your favorite Mouseplanet contributors, starting with Lisa Stiglic during Fun at Home #11 and Todd King during Fun at Home #12, will share their takes and attempts to make classic Disney Parks dishes.

That's all for this week, folks. Stay safe and well, and see ya real soon!