It was nice to see that readers enjoyed a glimpse at Madam Mim from The Sword in the Stone, but another Disney witch who I feel also doesn't get enough attention is Magica De Spell.

Magica is a Disney witch who is distinctly Italian and was created by Disney Legend Carl Barks in 1961. Today, she is a popular character on a variety of merchandise from pins to a Funko figure. 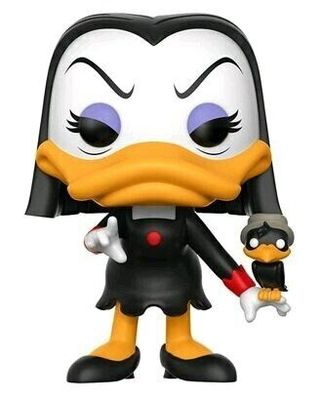 While Barks decided to make the character Italian to reference popular Italian movie actresses at the time like Gina Lollobrigida, Italy has had a long association with witchcraft.

In an interview with Klaus Strzyz in 1980, Barks recalled:

"I thought at the time Disney has always had witches who were ugly and repulsive. Why shouldn't I draw one that's not ugly but outright sexy? That's why she's Italian and of course very popular with readers in Italy. She knows that if she took a barrel of Scrooge's money, why, in a little while it would be gone, but if she had that Old Number One Dime and made it into this very lucky amulet, she would have many barrels of her own money and would be the most powerful person in the world. She'd also be the richest."

The name, obviously, references a "magic spell." "Magico" is the Italian word for "magic" so adding the "a" at the end makes it feminine.

When Bruce Hamilton began reprinting Barks' stories, Barks told him that the physical appearance of Magica was modeled on the character of Morticia Addams, "the dark haired witch from the Charles Addams family cartoons in the New Yorker which I liked very much. She was downright sexy."

It was atypical for Barks to have a story with real magic. As a former Disney storyman, he was familiar with Walt Disney's philosophy of "The Plausible Impossible" meaning taking something that is against the laws of nature, basically impossible, and make it appear rational and acceptable or "plausible."

So when Barks introduced the character of Magica, her magic entailed devices like her "Foof" flash blinders (that were actually just chemical pellets) or a battery-powered gadget on her arm that generated a "stun ray – a power more stupefying than the evil eye" as well as being a master of disguise and hypnotism so that her so-called powers that were all easily explained by science rather than sorcery. 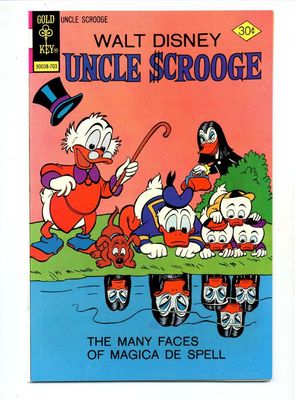 Later, in Uncle Scrooge No. 43 (1964), he had Magica find a crypt beneath the oldest temple of Zeus, the cave of Circe and the ruined temples of Boreas, Juno and the Furies where she found recipes and herbs from these characters who "were more likely live sorcerers than figments of ancient dreams".

She dipped her wand into the horrendous mixture and was able to conjure fantastic powers. While the nephews broke it apart into little pieces, she was apparently able to repair it or replace it because she used it in later adventures.

Barks obviously felt he had limited his storytelling with a character who was not truly magical and was solely focused on getting hold of Scrooge McDuck's first dime. As he continued the stories, he shifted the approach so that Magica had real magic and in his last two stories with her shifted her attention to artifacts like golden eggs and a flying carpet that had somewhat magical properties.

Of course, Magica treats everyone in the same condescending, domineering manner and always speaks in a stilted, formal tone, rarely even using contractions in an elite-type of speech that at times seems almost operatic. She is the only recurring villainess in the Disney duck comics.

Barks' stories found a new audience when they inspired the DuckTales American animated syndicated television series produced by Walt Disney Television animation. It premiered on September 18, 1987 and ran for four seasons and 100 episodes until November 28, 1990.

CEO Michael Eisner wanted to expand into the lucrative syndication market but not risk using top-of-the-line characters for fear of damaging their brand. However, he was not adverse to using "supporting" characters who might have a connection to one of Disney's major cartoon stars.

It was decided that the adventures of Scrooge McDuck from the popular comic books produced by writer and artist Carl Barks would provide some good adventure stories. Donald Duck would enlist in the Navy and Scrooge would become the guardian for Huey, Dewey and Louie.

Tom Ruzicka, associate producer of the series, said in 1987, "Although the show was initially based on the concept of doing Scrooge McDuck and his nephews, Barks was never really consulted. We discovered that a lot of stuff that made wonderful comics wouldn't translate into the 1980s or into animation, so we started evolving new characters and other things to contemporize the show. As we did that, the stories got further and further away from the comics, although a few episodes are lifted right out of them."

Many of Barks' characters were borrowed from the comic book pages including the Beagle Boys, Flintheart Glomgold, Gyro Gearloose and others including Magica De Spell who would appear in animation for the first time.

Her voice was provided by veteran voice actress June Foray using a pseudo-Slavic accent similar to the one she provided for the character of Natasha Fatale in the Jay Ward cartoons.

Magica was a prominent character in the first season of the show, but as the show started developing its own characters, she disappeared except for one more episode based on a Barks comic book story.

Her raven called Ratface who was her familiar in the comic books was re-christened as Poe in reference to Edgar Allan Poe who wrote a famous poem about a raven. He was now also her brother who was under a curse. In this television version Magica lives on her own unnamed volcanic island rather than on the slope of Mt. Vesuvius.

A reboot of the DuckTales animated series premiered August 12, 2017 with some significant differences while maintaining the basic formula of the original show. Magica's voice was now portrayed by Catherine Tate, who uses her own British accent.

Fifteen years before the start of the series, Magica De Spell was Scrooge McDuck's bitterest rival. During a battle between them atop Mount Vesuvius, Magica attempted to harness the power of the Lunar eclipse to trap Scrooge within his No. 1 dime, however, Scrooge was able to turn the tables on her and imprisoned Magica in the dime instead.

Before she was sealed in the dime, Magica was able to create a living being from her shadow, to act as her surrogate. The shadow took on the form of a young girl named Lena, who took the source of Magica's power, an amulet she held within the head of her staff and worked to free her creator.

She became best friends with Webby, who becomes progressively more under Magica's disembodied control as in The Other Bin of Scrooge McDuck (7/21/2018) where Magica directs her to steal the dime. Magica first appeared in the form of a black shadow with red glowing eyes in The Beagle Birthday Massacre! (9/30/2017) and made her first speaking appearance in Terror of the Terra-firmians! (10/2/2017)

In The Shadow War! (8/18/2018) a two-part episode, she regains her physical appearance: a tall green-feathered slender duck with yellow eyes and short black hair

Why does she looks like a snake with yellow eyes that have reptilian pupils? According to Frank Angones, the show's co-executive producer and story editor, "The yellow and green is the corrupting effect of her magic. The slender, taller appearance harkens back to her first appearance in a Barks book. And the triangle pupils are like the opposite of the pie eyes that everyone else has. It makes her extra subliminally upsetting."

In The Shadow War!, once she has Scrooge's first dime in her possession, Magica's physical form is released from the dime with her shadow releasing Lena's body from her control. Magica reverts Lena back to her original form as a shadow and traps her within Magica's own shadow, while Scrooge is sucked into his own No. 1 dime remaining trapped as Magica was for the past 15 years.

Magica casts a spell upon all the citizens of Duckburg, with their shadows beginning to come alive and thus creating for herself an army of shadow puppets and swearing to Scrooge she will destroy everything he ever loved starting with Duckburg. In the ensuing fights, Lena protects Webby, Magica's blast hits the dime freeing Scrooge who gets the upper hand and Donald's head breaks the magical ball on her staff causing her to lose her powers and shadow army.

Months later, in A Nightmare on Killmotor Hill (9/5/2019), Magica begins haunting the dreams of Lena in an attempt to regain her magic powers and seduce Lena back to the dark side. Magica uses a telepathic helmet and drone to enter Lena's dreams and pressure her. Lena magically destroys the equipment and Magica is defeated.

In Glom Tales (9/10/2019), having lost her powers, Magica is stuck working at Funso's Fun Zone performing fake magic tricks for children's birthday parties. She teams up with Scrooge's rival Flintheart Glomgold, who is forming a group of Scrooge's enemies—including the Beagle Boys and Mark Beaks—to finally bring about the downfall of McDuck and his family. Through some clever trickery, Louie defeats Glomgold and his allies turn on him. The wrong character model for Magica was sent to the overseas animation studio, so in this episode her feathers are white rather than green.

Appearing in only one DuckTales comic book story "Dime After Dime" (Disney Adventures 1990), the character of Magica's young niece, Minima De Spell became so popular that she appeared in several Italian comic book stories and was the inspiration for the character Lena in the rebooted animated series.

Granny De Spell (whose real name is Caraldina De Spell) was Magica's grandmother and taught her sorcery when she was a child. She first appeared in an Australian comic book story "A Lesson from Granny" (Magica De Spell Giant Special No. 381 - 1966) where she comes out of retirement to help Magica get Scrooge's dime.

The character was redesigned by artist Giorgio Cavazzano for a 1995 Italian comic book story "Magica De Spell and the Great Rock of Power-Plus" written by Francisco Artibani. Since then, Granny has appeared in several stories.

Magica makes a non-speaking cameo appearance in the Darkwing Duck animated series episode "In Like Blunt" (11/15/1991) where she, along with the Beagle Boys and Flintheart Glomgold, bid for the secret S.H.U.S.H. agent list at a criminal auction. She later appeared in the Darkwing Duck comic book series published by Boom! Studios.

Besides her many other comic book appearances by other writers and artists, she also appeared in animation in video games including DuckTales/ DuckTales Remastered, DuckTales: The Quest for Gold, DuckTales: Scrooge's Loot, Mickey's Racing Adventure, Donald Duck: The Lucky Dime Caper and Donald Duck: Goin' Quackers.

The sexy sorceress continues to enchant new fans with many more magical adventures ahead of her.