In honor of the July re-opening of Walt Disney World, I thought I'd steer back towards Florida with this month's article and discuss one of the great improvements made to the park in the last year in anticipation of the complex's 50th anniversary in 2021.

Walt Disney World is a vast operation, covering land twice the size of Manhattan and larger than San Francisco. Getting around such a vast space always presents a challenge—whether it's to provide a great experience while park hopping, traveling to Typhoon Lagoon from a resort hotel or going shopping Disney Springs after dinner (though this one is always a challenge depending on where you're coming from)—and to address this challenge, Disney has a myriad of practical and often fun transportation options. And last summer, Disney added to this transportation line-up with the Disney Skyliner.

The Skyliner is an aerial gondola system, "a means of cable transport and type of aerial lift, which is supported and propelled by cables from above" (Wikipedia). The system currently has five stops: Entrance to Disney's Hollywood Studios; International Gateway at Epcot; Disney's Riviera Resort; Disney's Caribbean Beach Resort; and Generation Gap Bridge, which connects the Pop Century and Art of Animation resorts. 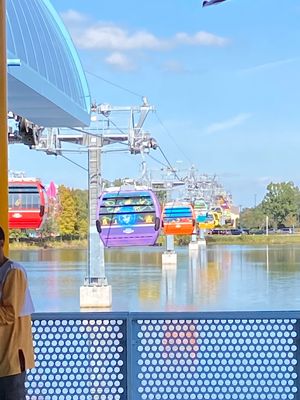 The Skyliner provides a relaxing ride above Hourglass Lake. Photo by Gregg Jacobs.

My family and I used the system multiple times while staying at Pop Century last fall. We found it to be a calm, relaxing and fairly quick way to get from our hotel to the two parks. You also get a cool, bird's-eye view of several of the hotels and the parks. I'll give one tip. Some of the gondolas are covered in vinyl wrap with Disney characters and ride references. While these are fun to look at, they actually obscure the view from the inside. If you want a crystal-clear, unimpeded view during your ride, get a gondola without the characters.

The Skyliner officially re-opened on July 15 along with Epcot and Disney's Hollywood Studios, so if you do make a visit to Walt Disney World, you should be able to ride.

This isn't the first time the Disney Parks have had a skyway, though they've had a bit of a checkered history. Back in 1956, shortly after the park opened, Disneyland debuted "The Skyway at Disneyland". When the Matterhorn was built in 1957, the Skyway was closed for the construction. When the Matterhorn opened the Skyway returned and actually ran through the the mountain on its journey between Fantasyland and Tomorrowland.

In the 1980s, the Skyway was reduced to only providing round trips to and from Tomorrowland while Fantasyland went under renovation, The Skyway was closed for good in 1994, and its operating budget was transferred to the then-new Indiana Jones and the Temple of the Forbidden Eye (a good move in my opinion). Fun fact: Pieces of the Skyway remained until recently. The Fantasyland station stayed intact, just blocked off from guests, until it was finally demolished in 2016!

For those of us old enough to remember, Walt Disney World's Magic Kingdom also had a skyway for many years. It opened with the park in 1971, connecting Fantasyland and Tomorrowland as it did at Disneyland. It ran for years, but after some high-profile incidents and high operating costs, it finally closed for good in 1999. The site of the Fantasyland station is now known as the Tangled restrooms.

Now all these years later, we have the Skyliner, and after that brief history lesson, it's time for the Skyliner swag. Whenever there's a new attraction, event, or movie, Disney is always very prolific in its merchandise to commemorate the occasion. The Skyliner is no exception. From the usual clothing and keychains to limited-edition offerings, Disney took the attraction's cool retro logo and stamped it on some really fun items.

We'll start where many Disney merchandise collections start: Clothing. The really cool logo for the Skyliner has a retro typeface and stick images of the gondolas, which contain the members of the Fab Five (Mickey, Minnie, Donald, Goofy, and Pluto), and feature the colors of red, black and blue.

There are a couple of Skyler T-shirts, including one with this cool retro logo. 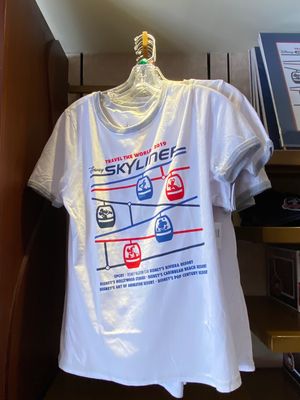 You have to have a Skyliner logo T-shirt. Photo by Gregg Jacobs.

The other has a Florida in the 1950s vibe, with palm trees and the appropriate saying, "There's Magic in the Air." It has the image of Mickey and Minnie in a gondola and silhouettes of the Tower of Terror and Spaceship Earth/the Eiffel Tower representing the two parks the Skyliner visits. It's a cool shirt, though seeing the Eiffel Tower surrounded by palm trees is very interesting. 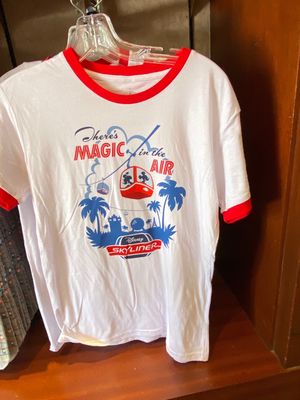 I love the T-shirt with the saying, "There's Magic in the Air". Photo by Gregg Jacobs.

I wrote an article a few months ago about how Disney has jumped on to the crazy sock bandwagon. They did so again with a pair of logo Skyliner socks. 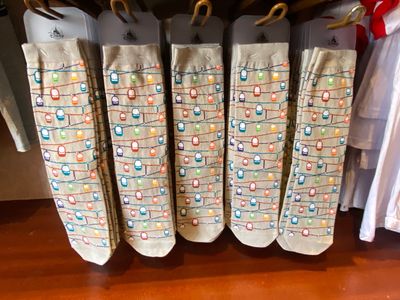 They are oddly beige considering how colorful everything else in the collection is, but feature the gondola logo in primary colors up and down the length of the sock. They run $14.95, but they often go on sale, especially if you buy more than one pair.

Being that this is, at its heart, a mode of transportation, it only makes sense that there be some travel-themed items. First among these is a Skyliner luggage tag. 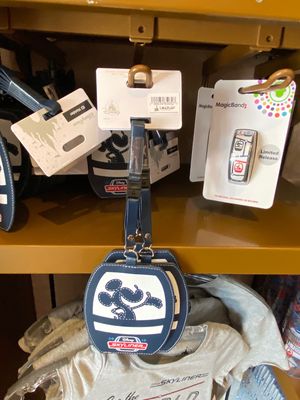 It just makes sense to have travel themed items. Photo by Gregg Jacobs.

The luggage tag is of the faux leather variety with stitching around the edges. It's actually pretty large and retails for $17.95.

Sort of another travel item is a Skyliner tumbler. It's clear plastic and has the logo wrapped around the entire item. 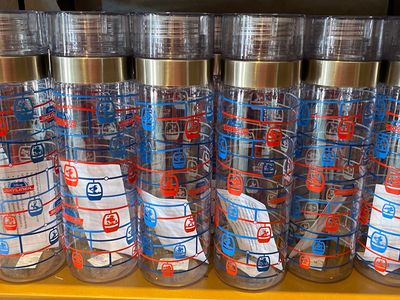 There's a Skyliner logo tumbler for hot days in the park (or on the Skyliner). Photo by Gregg Jacobs.

We'll now move on to that broad set of merchandise I like to call collectibles. These are items that aren't "useful," per se, but can be beautiful and provide a great reminder of your first experience on the attraction.

I love two dimensional art and really love the classic Disney attraction posters, the kind you see under the Magic Kingdom train station when you enter the park. Disney often releases prints of these when they open a new attraction, and happily, this wasn't an exception. The shop I visited had an 8 inch by 10 inch Skyliner attraction poster print, with the retro logo I saw on many of the other items, with primary colors and silhouettes of the Fab Five riding happily in gondolas. 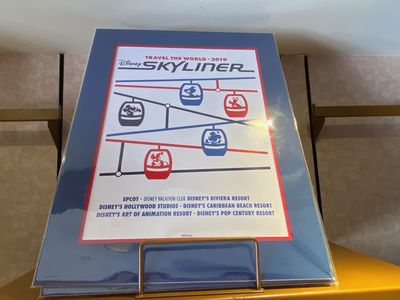 The $39.95 print comes in a color coordinating double mat and is ready for framing. And while it's not necessarily a limited edition, I've found that these tend not to be available forever as Disney rotates the merchandise.

If you're a fan of Funko Pop figures, Disney has you covered here, too. Made by Washington-based Funko, "Pop!" are vinyl figures of licensed pop culture characters, 3.75 inches tall on average and with disproportionately large heads. If you're into them, you can quickly assemble a vast collection with representations of all your favorite characters from the Disney or any other universe. 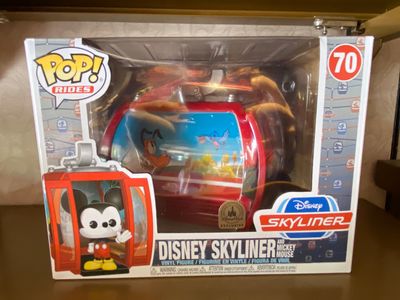 The Skyliner, of course, has its own Funko Pop figure. Photo by Gregg Jacobs.

The offering here is a large Skyliner car, with the doors open, and a vinyl Mickey Mouse figure waving at passersby. It also runs $39.95, and is a not bad representation of the real thing. 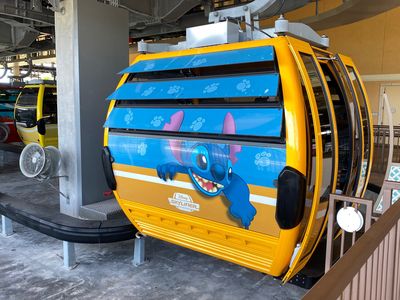 The Funko Pop figure looks like the real thing. Photo by Gregg Jacobs.

For a smaller and more reasonable gift item, there is a set of commemorative buttons. 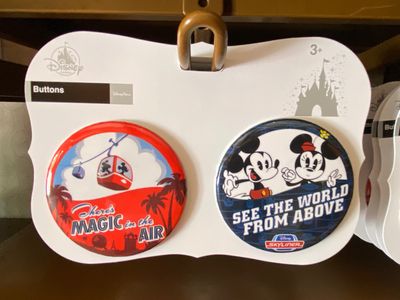 For a low-key gift, how about a set of buttons? Photo by Gregg Jacobs.

The set has two buttons, ready to attach to your shirt for a walk around the parks (or a ride on the Skyliner). One button has the "There's Magic in the Air" saying with an image of a gondola, while the other beckons you to "See the World from Above" with a happy Mickey and Minnie Mouse. The set goes for $11.95.

On the other end of the spectrum, if you want to drop some big bucks and like Dooney & Bourke, Disney just came out with a Skyliner crossbody bag. 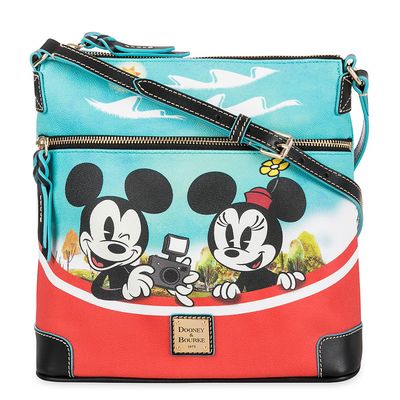 You can have a swanky Skyliner Dooney & Bourke crossbody bag. © Disney.

Last and certainly not least, you can wear the Skyliner on your wrist in the form of a Magic Band, and use it to get into the theme parks or your hotel room once you arrive. 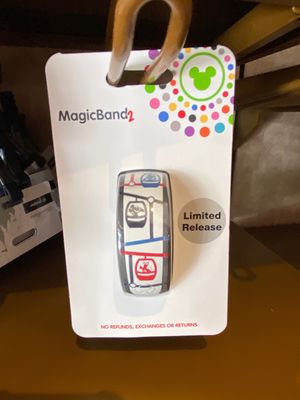 The Skyliner Magic Band features the attraction logo and sells for $29.95.

Overall, I was pretty impressed with the variety of merchandise Disney created for the opening months of Skyliner operations. I'm looking forward to more as time goes on, maybe including some higher-end limited-edition collectibles and some lower-end knick-knacks. The above are also just a (large) sample of what's available.

As to where you can buy these, the answer is really all over Walt Disney World property. I spotted Skyliner swag in all four theme parks and various gift shops all over the World. That said, if you want the full selection, your best bet is to visit a shop near a Skyliner station. On my last visit, the World Traveler at Epcot's International Gateway had all the above items, as did Mickey's of Hollywood at Disney's Hollywood Studios. There were also large selections at the hotel gift shops where the Skyliner has stations.

Due to world events and our own schedules, many of us won't be able to visit the parks in the near future. Fortunately, you can get at least some of these items from home. The Funko Pop figure, Magic Band, Dooney & Bourke bag and T-shirt were recently available on shopdisney.com. There also a lot of fun Skyliner merchandise on eBay, albeit with the typical markup. My eBay search actually yielded a lot of items in addition to what I have above, so I recommend you take a look.

That's it for today. Hopefully this gave you all a little taste of Walt Disney World magic and theme park shopping during this difficult time. Be well and safe, and see you next time.