I haven't been to Walt Disney World in over a year, and honestly, it's getting on my nerves...

To give you a glimpse inside my writing process, I typically wander the World, take a ton of pictures and plan my next five or six article topics, trying to give you a deep dive into new shops or group of merchandise that's all the rage at the resort.

2020 has been a little different—which brings me back to not having been to Walt Disney World in over a year. This year, I've found myself shopping mostly online, trying to grab a little bit of Disney magic at home. That became my focus for you, dear readers, in 2020. I've been trying to find you fun things you can get from home to help you get your own piece of the magic while we all wait for things to get back to normal.

To that end, today we're going to take a look at another great collection of merchandise that's gotten very popular (and frankly, has become big talking point with MousePlanet staff): Funko Pop, vinyl figurines that cut across many segments of pop culture, including Disney. According to the company, there are over 8,000 official Pop figurines, ranging in size from tiny to giant. The are princesses, droids, animated favorites old and new, and cultural icons, all immortalized in vinyl with a Funko flair.

I went through the large selection available online and picked out a few that I enjoyed (or frankly, just made me laugh). On to the figures!

If you want Disney Funko pop figures, ShopDisney is a logical place to start. There are many to choose from and the price point is similar to what you'll find at other retail outlets.

Let's start with the standard size figures that generally come solo, as opposed to part of a set.

With season 2 of The Mandalorian in the books, you likely want something to remember it by during the long stretch before season 3. The most memorable character from the series is, of course, The Child (aka baby Yoda). 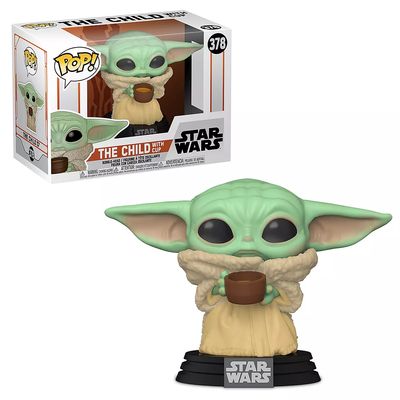 You can add the Child to your Funko Pop collection. © Disney.

There are actually several different Child figures, but my favorite is this simple bobble-head, which stands 4-½ inches tall and depicts him holding a cup. You can pick him up on ShopDisney for $12.99. 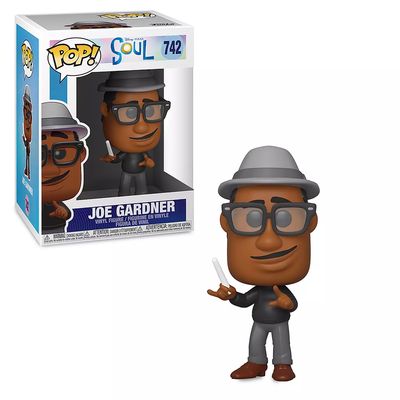 You can already own a figure from the new Pixar feature, "Soul." © Disney,

For anyone who doesn't know, the new Pixar feature, Soul debuts on Disney+ on Christmas day (as opposed to in theaters due to the pandemic). It features the story of jazz musician Joe Gardner (voiced by Jamie Foxx), who meets his untimely demise, and learns about life during a trip through the afterlife. It looks like a typically moving Pixar feature, and I for one, can't wait to see it.

There are several characters from the film that are already immortalized in Funko vinyl, including Joe Gardner, himself. Joe is 3-¾ inches tall and is also available at ShopDisney for $12.99.

The next one falls into the "making me laugh" category because it's so specific. Entitled "Disney Frozen 2: Elsa in Nightgown with Ice Diamond," this figure delivers pretty much what the title promises. 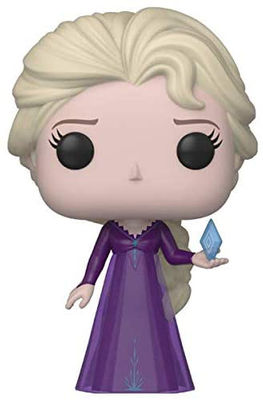 You can get Elsa in a purple nightgown with a diamond. ©Disney.

Elsa in a nightgown is actually billed as an Amazon exclusive. She stands 3-¾ inches tall and is dressed in the purple nightgown she wore while singing the great hit "Into the Unknown" (I'm a big fan of the song. Also check out the Panic at the Disco cover). She sells on Amazon for $11.99. As an aside, Amazon has a ton of Disney Funko Pop figures, so if you're interested, I highly recommend you check them out.

For the next one, I can tell you there was quite a frenzy amongst the MousePlanet writing staff when it came out.

For Disneyland's 65th anniversary, there were several Funko Pop figures created, including one that featured Mr. Toad of Wind in the Willows and Mr. Toad's Wild Ride fame. 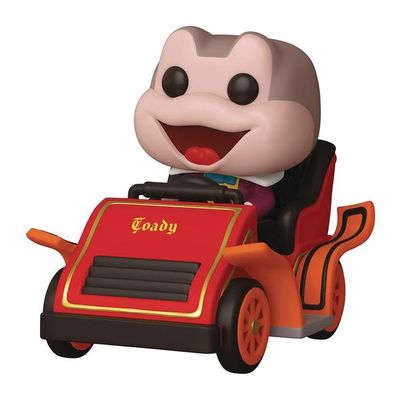 You can get Mr. Toad in his own wild ride car. © Disney.

The figure features Mr. Toad riding in the same car you ride in on Mr. Toad's Wild Ride at Disneyland (and formerly at Walt Disney World, though you can now bounce with Pooh's Tigger in that space). Toyzany is selling the figure for $23.99, though I should warn you that these were produced in a limited quantity and availability may be limited. Just ask the MousePlanet writers who bought this one (there were several who shall remain nameless).

Moving on, if you're willing to roll the dice, you can buy these Disneyland 65th anniversary mini-figures. The series of seven roughly three-inch high vinyl figures features Alice and the Cheshire Cat from Alice in Wonderland, Peter Pan and Captain Hook from Peter Pan, and Mickey Mouse, Minnie Mouse and Goofy of Fab Five fame.

You can get these straight from Funko for only $7. The catch is that you can't specify which figure you want. Like a blind or mystery Vinylmation box, you get a random figure—so if you want them all, you may have to keep trying.

They've also started coming out with different sets that go beyond just the figures. These will typically include a Funko Pop figure and a second item.

One example is Mickey Mouse with the new Disney Skyliner. This came out when the Skyliner system opened at Walt Disney World in 2019. The gondola system connects four Disney resorts, Disney's Hollywood Studios, and Epcot. Of course when it debuted, Disney had a raft of merchandise to commemorate the occasion. 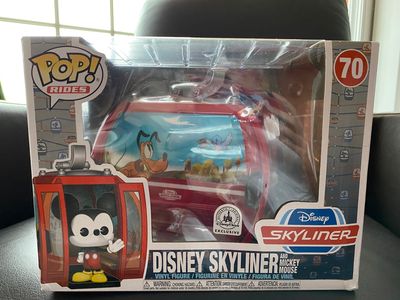 You can Funko with Mickey Mouse and the Disney Skyliner. Photo by Gregg Jacobs.

The figurine, posed correctly, depicts Mickey Mouse waving to passersby from a Skyliner gondola (the gondola has Pluto in the window). I've ridden the Skyliner system during a stay at Pop Century, and this is a pretty good representation. I have it on good authority that one of these may be under my Christmas tree, and hate to tease, but they're sold out for now on ShopDisney. You should keep checking there, or you can find them now, albeit with a markup, on Amazon or eBay.

Another set that's coming soon (to ShopDisney and likely to my house) is the "Sleeping Beauty Castle and Walt Disney Pop! Town Vinyl Set." 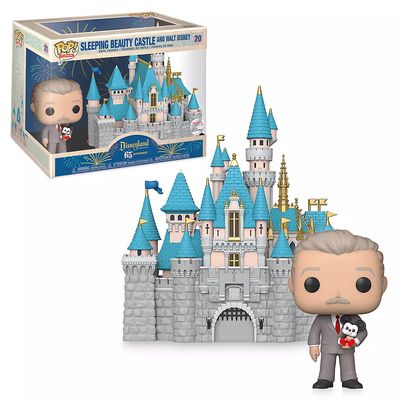 The really cute set features a Funko Pop version of Walt Disney, himself, holding a Mickey Mouse doll and standing in front of Sleepy Beauty Castle from Disneyland. It was created in honor of Disneyland's 65th anniversary and is currently on pre-order at ShopDisney, officially available on January 26, 2021. It's rare that you see Walt depicted in this cartoony way, so this one seems kind of special—especially for Disneyland fans robbed of their happy place since this past March.

Funko has also gotten in on the collectables game. Teaming up with Walt Disney Archives, they've come out with a Mickey Mouse Five Pack. The five figures are 3-¾ inches tall and sit upon a black base with the saying, "Walt Disney Archives: Preserving the Magic."

You can combine Funko Pop and the Walt Disney Archives. ©Disney.

The figures feature Mickey through the years, running from Black and White to Color Mickey, Sorcerer Mickey, Mickey the Tailor, and modern-day, corporate-symbol Mickey (anyone remember the Walter Cronkite/Robin Williams video from way back when at then Disney MGM Studios?). You can buy the set on Amazon for $49.99..

There are literally hundreds of these out there, so no matter what your particular Disney interest might be, it's likely you can find a Funko Pop figure to match.

That's all for today folks. I wish everyone a very happy holiday and even happier 2021. See you in the new year!