The Disney Store - The End of an Era?

I'll admit, I hadn't been in a Disney Store in a long time—but then two events in the last week reminded me what bargains there are to be had there, and what a potentially short time we have left to take advantage of them.

I was visiting family in Tampa (and no, didn't get to Walt Disney World this trip… so close and yet so far), and we visited a local outlet mall, the Tampa Premium Outlets. My sister asked if the Disney Store there was still open, and I honestly didn't know. Disney had months ago announced its closure of a large number of its stores worldwide, and had been vague on the time. That said, I looked it up in the outlet directory—and sure enough, the Disney Store Outlet was still there.

The second event was an email from Disney a few days later, telling me to come say good-bye because my localish Disney Store would be closing shortly.

I got an email that the Disney Store at a local mall will be closing after being there for many years. ©Disney.

This is the store at at a local mall that has been there for years. What was especially interesting is that the email said that store would close "on or before July 14th," so the closing date was still vague and variable. But closing is closing, and that store at Willowbrook Mall, along with most others, will be gone soon.

To give a little background, on March 3 of this year, Disney announced a radical change in how it was approaching retail. To quote the Mouse, "while consumer behavior has shifted towards online shopping, the global pandemic has changed what consumers expect from a retailer". In a nutshell, Disney, like many retailers, is shifting its focus to online shopping and away from what business types like to call brick-and-mortar.

From a practical standpoint, Disney said at least 20% of its stores would be shuttered by the end of 2021—meaning a closure of at least 60 North American Disney Stores. The company would then evaluate additional future closures, both in North America and the rest of the world (a story just surfaced about stores closing in the UK). The rollout of these closures has been a bit uneven, and are being announced as they happen.

So what does all this mean? The focus going forward will be on online shopping and enhancements to shopDisney.com, as well as continuing to develop store-in-store setups like the Disney Store at Target. The company also made a point of saying that the over 600 retail locations located at the different theme park sites would not be impacted.

From a personal/anecdotal standpoint, I can tell you that once my local Disney Store closes, every local mall Disney Store in my area will be gone. Sadly, the first ever Disney Store created in Glendale, California, way back in 1987, is also closing.

In a nutshell, in the not-so-distant future, your Disney shopping experience will likely either be online, at a Target or other specialty retailer, or a tourist-friendly location such as the Disney resorts or in large cities like New York, where flagship locations are likely to remain.

All that said, the Disney Store experience still does exist for now—so back to today and the happy surprise I got in Tampa. So what did I find there?

Again, this was a Disney outlet and not technically a regular Disney Store, but they're very similar in style and merchandise, with the outlet maybe focused more on clearance goods and sales. I wrote an article a while back on the Disney Outlet experience, and what I found this trip wasn't terribly different. There were a lot of toys, some really good discounts, and a great rack of Disney Parks clearance clothing.

My knock on Disney Stores in general in recent years is that the range of merchandise has shrunk. And by that, I mean that in the olden days when the stores first opened, it felt like there was a wide selection of good for the whole family. There were plenty of toys for the kiddies, of course, but there were also items for adults and a gallery with collectibles, like animation art. More recently, I've found the selection has been mostly lower-end toys, with not a lot for other fans. [Editor's note: Some historians point to the 2004 licensing and sale of the chain to The Children's Place for the shift in direction towards a more child-focused inventory.]

I'm admittedly coming at this from the perspective of a middle-aged superfan with mostly teenage nieces and nephews (long past the princess/pirate phase). But as you're aware, dear reader, I'm someone who can find something to buy almost anywhere, and I now rarely enter a Disney Store because there's not much there for me (and maybe this is part of the reason they're closing).

That said, I was pleasantly surprised at what I found when I visited that day. Again, most of the inventory was for the under-10 set (and I'll talk about that, too), but there were a few things for grown-ups, too, and some outlet-type bargains to boot.

We'll begin with some of those toys… and the shelves around the perimeter of the store were loaded!

If you or your tike are into Disney princesses, there was a bargain waiting for you at the entrance. 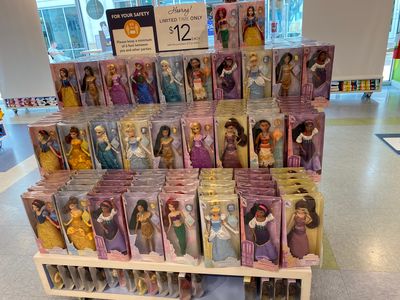 Disney princess "barbies" were available in a wide range, and for only $12. Photo by Gregg Jacobs.

There was a huge display of the wide array of Disney princesses, from Ariel to Snow White (we need a princess named Zelda or something, so we can say princesses from A to Z). These are the popular Barbie-like plastic dolls. There really was a lot available. In addition to the aforementioned Ariel and ice queen, Elsa, there were some of the lesser-known members of the club, like Meg from Hercules and Esmerelda from The Hunchback of Notre Dame. These were on sale for a flat $12, marked down from $24.95.

The standard Disney Store setup is to have shelves lining the edges of the store loaded with toys and plush. 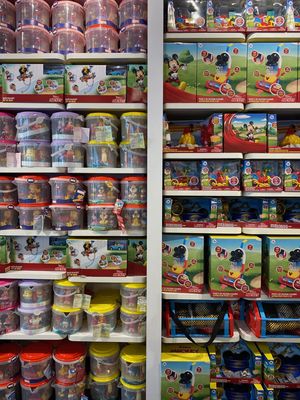 The shelves around the perimeter of the store were loaded with Disney toys. Photo by Gregg Jacobs.

This store had too many items to mention, but to name a few, there was a giant plush section with many different characters. Some were marked down to $5 and $10. There were also children's playsets representing all facets of the Disney Universe, including the Fab 5, Star Wars and Marvel characters (vinyl Marvel bath set, anyone?). In general, from a toy perspective, I'd just say that they had a typical assortment of Disney Store merchandise.

Beyond the toys, I've always liked the T-shirt assortment at the stores. They typically have two displays of Ts: one for children and one for adults—and there's invariably some kind of price special. 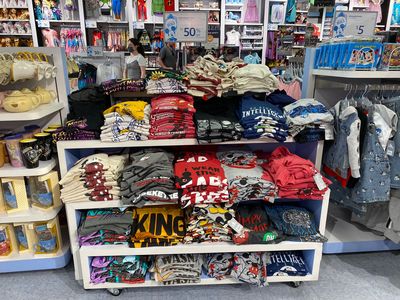 I've always enjoyed the big display of tees at Disney Stores, and have especially enjoyed the discounts. Photo by Gregg Jacobs.

As always, there was a wide variety available. For both adults and children, there were shirts depicting classic Disney characters (there was an especially good assortment of Donald Duck T-shirts, which made my 6-year-old nephew very happy) and Ts from the worlds of Star Wars and Marvel. Best of all, there was one of the specials I mentioned. All Ts on those racks were buy-one-get-one for 50% off. The adult Ts were typically $15.99, while the child's were $12.99—so for $24.00 and $19.50, respectively, you could get two of each shirt. That's a huge discount from what you'd spend at the parks, and also cheaper than you'd typically see online.

One thing I was also happy to see was a small display of Pride merchandise in honor of Pride month. There wasn't a ton, but there were a few nice shirts and hats. 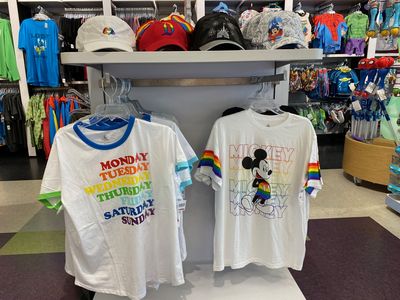 The Disney Outlet had a small selection of Disney Pride merchandise available. Photo by Gregg Jacobs.

While I was looking, a cast member approached me and told me that a portion of the proceeds goes to LGBTQ+ charities. I looked it up online afterward, and it's a fairly extensive list of worthy organizations that they're supporting. It's nice to see that the company is going the extra mile and not just selling branded merchandise. If you're interesting in seeing the Disney Pride Collection, shopDisney.com, of course, has a ton available, with everything ranging from clothing accessories to plush.

Now, let's take a look at the section of the store that makes this a true outlet, the Disney Parks clearance section. 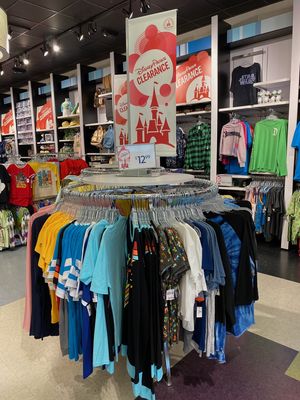 A section of the store was dedicated to Disney Parks clearance items. Photo by Gregg Jacobs.

I will begin this one by pointing out something funny. There I was, outside of Tampa, Florida, about 60 miles from Walt Disney World—and virtually all of the Disney Parks items were from Disneyland, all the way across the country on the other coast. The Disney consumer products staff works in mysterious ways in how they move their merch.

That said, there was some nice stuff at a good discount. Most of what I saw were clothing items; T-shirts, sweatshirts, and pajamas. One rack was loaded with an assortment of Disneyland branded items, all fo $12.99. The original prices varied, but tees at the parks rarely sell for less than $20, while sweatshirts can go into the $50s.

The standout item for me was a Disneyland spirit jersey. Spirit jerseys are very big these days (my 15-year-old niece called it out as a spirit jersey), and this a pretty one that's blue with white stripes on the sleeves and a white Disneyland embossed logo on the front. It also has the wording, "est. 1955". 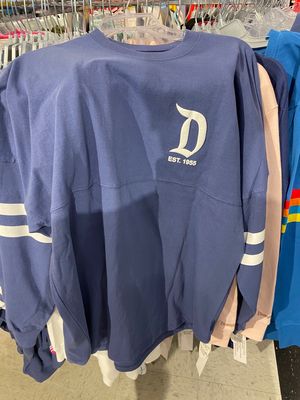 At the Disney Store Outlet, you can still get a Disneyland spirit jersey at a big discount. Photo by Gregg Jacobs.

Again, clothing marked most of the Disney Parks clearance items, but there were also some interesting items like backpacks and keychains.

Beyond the Ts and other clothing, again it was the typical assortment of Disney merch. Again, I won't get too specific, because I've droned on about this topic before, but it was fun to stroll and see what else was around. 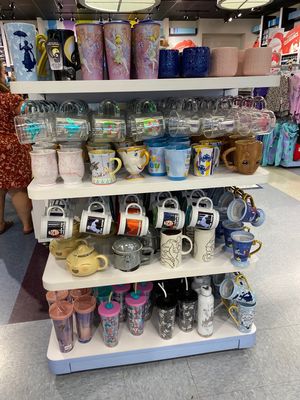 I was happy to see the wide range of mugs, tumblers and water bottles. Photo by Gregg Jacobs.

As I've written before, I'm a big fan of Disney kitchen items, and there were a ton of mugs, tumblers and water bottles spread over several displays. There were also glasses and kitchenware sets (plates, sliverware, etc.).

Overall, my biggest takeaway from the Tampa experience was that the store didn't seem like it was about to shut down. It was business as usual, and there were still bargains to be had. If your local store is still there, I'd recommend taking a look. I expect there to be a lot of clearance items as they potentially get ready to close, so you never know discounts you may find.

In the end, I'm going to choose to look at this as a period of transformation, rather than a good-bye. Disney is doing what almost every other retailer is doing, focusing their efforts where they feel consumers will get the most bang, and knowing Disney, what they do going forward will be different, but still splashy and fun, so we should be excited.

Thanks as always for reading and see you real soon!