On today's show, Penny York talks about the upcoming Summer Nightastic promotion, which runs from June 6 through August 14. Also, a new "At the Station" comic, a look at the Yak & Yeti Restaurant and this week's Twitter/Facebook poll.

Summer Nightastic runs from June 6 through August 14, and the five components are spread across three parks:

The Magic Kingdom features the highest-profile events, the Summer Nightastic Fireworks Spectacular and the return of the Main Street Electrical Parade. The Summer Nightastic Fireworks Spectacular is a "reimagined" edition of the old Magic, Music and Mayhem fireworks show from the Pirate and Princess Party, and replaces Wishes for the duration of the event. Mark loved this show, and talked with Laura Offerdahl about the original show way back on Episode 5. The Main Street Electrical Parade is one of the most beloved nighttime spectaculars in the history of Walt Disney World, and has returned to Walt Disney World for this promotion after running at Disney's California Adventure for the last few years. While Disney will again call it the Main Street Electrical Parade, the popular drum float will continue to say "Disney's Electrical Parade," a holdover from its days at DCA.

Disney's Hollywood Studios will see a new series of drop sequences at the Twilight Zone Tower of Terror as well as a rock 'n' roll dance party at the Sorcerer Hat Stage. The Tower will see four new drop sequences with new effects. The new drop sequences will run consecutively, rather than randomly as with the current four drop sequences. Of course, with no real way of telling which drop sequence had just run, it may seem just as random to guests. The Rock and Glow Dance Party will feature Studios mainstays Mulch, Sweat and Shears trading off with a DJ and dancers. The dance party will run five nights a week, not appearing on Mondays and Wednesdays.

The Sounds Like Summer Concert Series at Epcot, which has been running for several years, will be folded in under the Summer Nightastic umbrella. The concerts, which run from June 12 through July 31, features a series of "cover bands" performing the music of famous acts. The series will include tributes to The Bee Gees, The Eagles, Janet Jackson, The Rolling Stones, Bon Jovi, U2 and Chicago.

Also at Epcot this summer, though not under the "Summer Nightastic" umbrella, Captain EO returns to the Imagination Pavilion starting in early July.

At this time, there has been no word on any of these new features remaining beyond the Summer Nightastic promotion period.

Penny is most looking forward to the Main Street Electrical Parade.

For more information, you can go to the official Summer Nightastic page on the Walt Disney World site.

Thanks to Penny York for taking the time to talk to Mark, and to Benjamin Thompson for setting up the interview.

This week, we've got another great comic strip from Sean Jones. 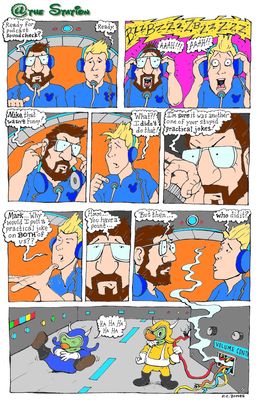 If you're wondering who those guys in the last frame are, check out these two Wade Sampson articles (article 1 | article 2).

This week we take a look at the Yak & Yeti Restaurant at Disney's Animal Kingdom. MousePlanet readers love the restaurant, rating it 4.4 out of five planets. Our featured review this week is by bmxmom of Southern California.

bmxmom and her daughter were a little concerned about trying the restaurant, but ended up loving the food, rating the wok-fried green beans as the best single item of their trip. The service was great as well, leading to her giving it a 5-planet rating.

Mark loves Yak & Yeti and discussed his most recent visit there. Mike also loves the place..

You can also find Yak & Yeti Restaurant in our Park Guide.

What do you think of Disney's Art of Animation Resort?

Mary Tesch wrote in to say that she was laughing so hard while listening to Episode 404 that she nearly had to pull her car off the road. The rest of her family loved it as well when she played it for her later. She advised Mark to not sing the next time. Mark noted that he was mangling his voice to try to sound somewhat correct to the original, and that he'd keep singing in his normal voice.

Donna S. noted via Twitter that Episode 404 was great, and that it improved her mood greatly.

Karen had to stop listening to Episode 404 in order to write in because she was laughing so hard. She has become addicted to Phineas and Ferb, and loved the show, especially the accents and intonation of each character. She also wanted to know how Steven growled like Perry.

Vance Cope said via Twitter that Mark and Mike could continue arguing over whether Nemo or Lion King rooms at the new Art of Animation Resort would be better.

Brian Jonas was very glad to hear the return of the Featured Attraction and Review System Spotlight segments, and hopes that they will be back on a regular basis. He also enjoyed our discussion about the news of Disney's Art of Animation Resort.

Sharla Manglass called in to report on her recent trip to Walt Disney World (she missed Mark by a couple of days). She was impressed by Port Orleans French Quarter, loved Artist Point as usual (for their anniversary dinner), found a new favorite drink (Wildberry Margarita), had an interesting time at Star Wars Weekend, and was surprised by the Biergarten.