Thursday, July 8: A sneak preview of the Epcot International Food and Wine Festival ($95 per person, plus tax, includes gratuity) – limited to 80 guests, this event features:

This event takes place on Thursday, July 8 from 6:30 p.m. to 9:00 p.m. at the Wonders Retreat located on the second floor of the Wonders of Life Pavilion at Epcot.

The evening‘s host will be Brooks Tropicals, a grower of tropical fruits and vegetables in Florida and the Caribbean.

The event takes place at the Wave… of American Flavors at the Contemporary Resort, with the reception starting at 6:30 p.m. and dinner at 7:00 p.m.

Friday, July 16 and Saturday, July 17: The Great Movie Ride Dinner ($155 per person, plus tax, includes gratuity) – limited to 80 guests per day, this event:

Dress for all three events is casual evening attire.

To request a reservation, send an e-mail to Tables in Wonderland (link) with your interest, name, daytime phone number, home address, and the number of people in your party. Reservations are first-come, first-served. You will need to provide your credit card number over the phone at the time of confirmation. 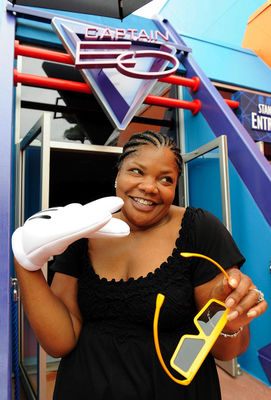 Comedienne and Academy Award-winning actress Mo'Nique poses with a pair of 3-D glasses and one Mickey Mouse glove as she prepares to visit "Captain EO" on the film's grand re-opening day at Epcot. © Disney

Twenty-four years ago, Jackson joined forces with Disney, producer George Lucas and director Francis Ford Coppola to create this film, featuring Jackson as Captain EO, and Angelica Huston as the Supreme Leader. The Disney-created characters include Hooter, a little green elephant-like creature who sneezes musical notes through his trunk; Fuzzball, an orange-haired space monkey with butterfly wings; the Geex, a golden-haired, two-faced personality with two left feet, one right foot and two shaggy heads named Idy and Ody; Major Domo, whose mirrored silver costume becomes a complete drum set; and Minor Domo with his sparkling torso that turns into an electric synthesizer played by Hooter.

It has been 16 years since Captain EO last played at Epcot. Parents might watch Captain EO with fond memories while children may find it cool, in a retro, 1980s, white leather, moon-walking way.

Mark your calendars! Disney‘s Aulani Resort, at Ko Olina Resort & Spa on the Island of Oahu, Hawaii, is scheduled to open on August 29, 2011.

Aulani is the Hawaiian word for “the place that speaks for the great ones” or “the place that speaks with deep messages.” Aulani is currently under construction on 21 acres of beachfront property. When completed, Aulani will have 360 hotel rooms and 481 multi-bedroom Disney Vacation Club villas. It will also include an 18,000 square foot spa, two restaurants, kids clubs, wedding lawn, a 14,545 square foot convention center and banquet facility, and 48,685 square feet of outdoor venues, including a “wonderland of water” featuring snorkeling lagoons, river pools, sunset-facing hot tubs, waterfalls, water slides, fishponds, pathways and tide pools with native sea life. 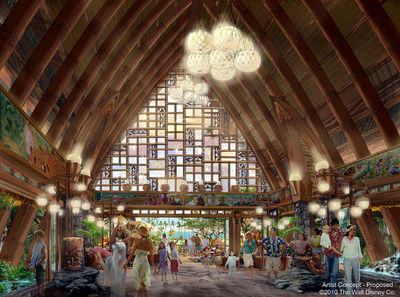 Disney has started selling DVC time-share interests in Aulani. For more information, visit the DVC Web site (link) or call (800) 500-3990. Just so you know, we are not Disney‘s only target market. A 15,000 square foot showroom featuring a two-bedroom Aulani model is scheduled to open this month at the Tokyo Disneyland Resort in Japan.

…Last Monday, a construction worker was injured at Disney's Aulani Resort in Hawaii. Fire rescue crews and paramedics were called to help a worker who had been pinned by a scissors lift, which is a folding industrial platform. The worker to a local hospital in critical condition.

…Disney Cruise Line has revealed another restaurant aboard the new Disney Dream, which begins sailing in January. Inspired by the picturesque gardens of Versailles, Enchanted Garden recalls an elegant conservatory in France. The restaurant boasts painted frescoes of rolling hills, lush greenery, and blue skies overhead. During dinner, the ceiling will change from daytime blue into a golden red sunset, and then into a night of twikling stars. The flower light fixtures will bloom and become bathed in color, decorative wall sconces fall away to become folding fans, wall paintings project dusky illumination and the centerpiece fountain is flooded with shimmering light.

…Heads-up pirate fans. Even though the Kauai set of “Pirates of the Caribbean: On Stranger Tides” is off limits to all but cast and crew, Jerry Bruckheimer, the film‘s producer, aka “@BruckheimerJB” has been sharing photos through Twitter.

…Encore! Cast Choir and Orchestra, a volunteer ensemble of nearly 300 Disney Cast Members, has chosen Make-A-Wish Foundation of Central & Northern Florida as their 2010 beneficiary. They will perform Dream Our Dreams, A Musical Tribute to the Legacy of Disney from July 30 through August 1 at Epcot World Show Place. Tickets are $15 and are available through www.encorecentral.org.

…Outlook Bar on the Disney Magic is now closed. It does not appear that there is anything in the works for Outlook Bar during this year's dry dock.

Everyone can save 15 to 30 percent off your room rates for stays from May through mid-August. Rates vary depending on your dates of travel and the resort category at which you are staying.

For any stay from May 2 through August 14, you get some great discounts:

The deal can be booked from now through the day of your arrival. The number of rooms available at these rates is limited. Reservations may be booked through the Walt Disney World web site (link) or by using code ID6 if booking via the Walt Disney World Reservations phone line (407-939-7515) or through a travel agent. MousePlanet's preferred Disney travel providers are MouseEarVacations.com (link) and Small World Vacations (link).

If you're a Passholder, you can get even deeper discounts. Passholders can save 30 to 40 percent off their room rates for stays at Walt Disney World this summer. Rates vary depending on your dates of travel and the resort category at which you are staying.

For any stay from June 3 through August 14, you get some great discounts:

The deal can be booked from now through your day of arrival. The number of rooms available at these rates is limited. Minimum length of stay requirements may apply for Friday or Saturday arrivals. Reservations may be booked through the Walt Disney World Passholder web site (link) or by using code KD5 if booking via the special reservations phone line for this offer (407-939-5684) or through a travel agent. MousePlanet's preferred Disney travel providers are MouseEarVacations.com (link) and Small World Vacations (link).

The "Kids Stay, Dine and Play Free" offer that has been available to Disney Rewards Visa cardholders has now been extended to the general public, but without the "Dine" part of the offer. Additionally, the "stay" portion of the deal really doesn't have much value, since the cost of the room doesn't change whether there are kids in the room or not but the free park passes may provide some needed relief in your travel budget.

The general public offer is good from May 2 through October 2 (you must book by August 14).

In the new offer, kids ages 3-9 staying in the same room as an adult (limit four guests per room) can get free standard Magic Your Way passes for the length of the vacation package. Reservations may be made by using code BF4.

The number of rooms available at these rates is limited. To reserve a package, you can book online (link), call the Walt Disney World Reservations phone line for this offer (407-939-7905) or contact a travel agent. MousePlanet's preferred Disney travel providers are MouseEarVacations.com (link) and Small World Vacations (link).

Active and retired U.S. Military personnel can save up to 40 percent on rooms at select Disney resorts for most nights through September 30. This discount must be booked by July 31. Reservations may be made by using code OUQ (room only), OUR (with Quick Service Dining Plan), OUS/OUT (with regular Dining Plan), or OUU (with Deluxe Dining Plan).

The number of rooms available at these rates is limited. To reserve a room with the Military discount, call the Walt Disney World Reservations phone line (407-939-7607) or contact a travel agent. MousePlanet's preferred Disney travel providers are MouseEarVacations.com (link) and Small World Vacations (link).