We're back! Sorry about our brief disappearance. We had some technical difficulties and—due to Mark's son's Bar Mitzvah and his travel for MouseAdventure—it took longer than expected to be able to get those problems ironed out. But we're back, and with loads of holiday cheer for you!

On today's show, Mark interviews the people behind Mickey's Very Merry Christmas Party, Holidays Around the World, and the Osborne Family Spectacle of Dancing Lights.

It was great seeing everyone who played MouseAdventure with us at the Studios on November 12, and all who made it to the Big Bad Voodoo Food-Do To-Do meet on the last day of the Epcot International Food & Wine Festival on November 13. Please let us know if you have any ideas on things we could do for future meetups at the parks.

Mark interviews the people behind Mickey's Very Merry Christmas Party, Holidays Around the World, and the Osborne Family Spectacle of Dancing Lights.

The party takes place on 19 nights this year, and is the only way to see the special holiday entertainment before December 19. The remaining parties this year take place December 6, 7, 9, 11, 13, 14, 16, and 18. At the party, you can enjoy Mickey's Once Upon a Christmas Time parade (the largest parade of year), Holiday Wishes fireworks, Celebrate the Season show on the Cinderella Castle stage, A Totally Tomorrowland Christmas at the Tomorrowland stage, character dance parties at both Cosmic Ray's Starlight Cafe & the Diamond Horseshoe Saloon, 78 characters, and a special holiday insert for The Magic, The Memories, and You castle projection show. There's also snow on Main Street, U.S.A. and free cookies and hot cocoa. The Castle Dreamlights are lit every night at 6:15 during Cinderella's Holiday Wish.

The holiday version of The Magic, The Memories, and You includes images of the castle as a gingerbread house, the "cakestle" from the park's 25th anniversary, gifts, and more. This edition features 529 photos of day. In the spring, there will be a "romance" chapter, with a summer chapter featuring Disney Channel characters.

The Dreamlights light the entire castle with 250,000 lights for the amount of energy needed to run two refrigerators. All lights in all of the parks (as well as the Disney Cruise Line, coastal Disney Vacation Club resorts, Aulani, and Disneyland) use LEDs only. Even the lights that appear to be incandescent are now LED. The Dreamlights will be lit every night through January 7, and the decor will be up through January 10.

When the holiday party ends, the entertainment becomes part of the daily holiday entertainment. The parade, fireworks and castle show will replace Celebrate a Dream Come True parade, Wishes, and Dream Along with Mickey castle show. The 180-degree bursts in Holiday Wishes will only be seen during the party, and will not appear from December 19-29. For the New Year's Eve fireworks, which will be shown on both December 30 and 31, the fireworks will have the rare full-circle bursts including shells fired from the islands in front of the Magic Kingdom. Since the New Year's fireworks are shown on 2 nights, you can catch them at tha Magic Kingdom on December 30 and see the show at Epcot or the Studios on New Year's Eve.

In answer to reader/listener questions:

Plans are already in motion to decorate New Fantasyland, but they will not be finalized until after the land opens. The decorations would first be seen for the 2013 holiday season.

Next up is Kris Bunnell, Show Producer for Holidays Around the World at Epcot.

Holidays Around the World runs each year from the day after Thanksgiving until December 30, and features such entertainment as the Candlelight Processional, Holiday Storytellers Around the World, Joyful – a Gospel Celebration, the Voices of Liberty sing Christmas carols, the World Showcase Players perform their take on Dickens' A Christmas Carol, Duffy the Disney Bear is dressed in Christmas costume, and the Jammitors will be debuting a new holiday-themed show this year.

The storytellers each tell about their country's holiday customs and traditions, including those countries that don't celebrate Christmas. China features the story of the Chinese New Year with the Monkey King, Japan also celebrates the New Year, Morocco's storyteller talks about Ramadan and Ashura. The American Adventure features Hanukkah and Kwanza storytellers, as well as providing an opportunity to meet Santa and Mrs. Claus.

Former Voices of Liberty conductor Dirk Donahue is now with Dapper Dans (we talked with him back in Episode 77).

The Candlelight Processional is a retelling of Christmas story in words & music with a celebrity narrator, over 50-piece orchestra, 72-member cast choir, 300 members of local choirs & choruses, conductors, sign-language interpreters–over 400 people total. The lines get long, but guests can get reserved seating with the Candlelight Dining package with dinner at table-service restaurant.

In answer to reader/listener questions, the Lights of Winter and the tree-lighting ceremony are not slated to come back at this time, but the gospel performances have been added at the fountain stage. Disney is always evaluating their offerings and investigating new technologies, but they're currently focusing on entertainment offerings. In addition to Joyful, there's a new holiday overlay for the Jammitors that is "focused on tools." We spoke to head Jammitor Paul Collins in Episode 251.

Finally, we hear from John Phelan, Show Director for the Osborne Family Spectacle of Dancing Lights.

This year at the Osborne Lights, for the first time Tri-City Square (where the globe and angels are located) dances with the rest of the street. Also, for the first time the Lights are all LED the last items to be converted for this year were the rope lights. The San Francisco Street canopy now has color-changing LEDs and dances in patterns.

The lights now dance to two new songs: "Nuttin' for Christmas" from the new Prep 'n' Landing short and "Here Comes Santa Claus" by Elvis Presley as tribute to Jennings Osborne. There's a new video show on 60-inch monitor inside the Chevy building next to the big tree, which includes a slideshow of the history of the Lights and Jennings Osborne.

John was the person who was assigned to get Jennings Osborne to bring his lights to the Studios. John told the story of how he got the assignment and what he went through to get them to the Studios and the race to get them set up the first year. He also confirmed the story of the black cat. John also talked a bit about the various themes "hidden" throughout the display every year. He gave a great deal of the credit to the crew.

The display has approximately 5 million lights now. No strand has more than 100 bulbs and each strand is put up by hand, which requires them to start work laying out the electrical power in August and putting up lights starting in September. The current technology has eliminated the "one light goes out, they all go out" issue. There is some safety equipment in place, and a Ground Fault Circuit Interrupt (GFCI) may take out a section of a building due to moisture, etc. to protect against short-circuits.

The conversion to LEDs has led to tremendous energy savings. According to the head electrician, the display consumed 843,000 watts when the display was incandescent, and this year it's down to 220,000 thanks to the LEDs.

In answer to a reader/listener question, the Flying Spaghetti Monster is on hiatus this year. Even John doesn't know how popular some things are (but you can probably expect the FSM to be back next year). 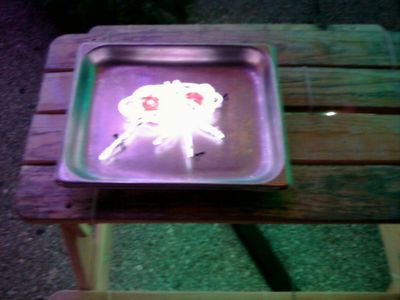 The elusive Flying Spaghetti Monster, as captured during the 2009 edition of the Osborne Lights. Photo by Jennifer Rich.

This is the first time that the lights have been lit since Jennings Osborne passed away, and there are several tributes to him in the Lights. The Elvis song is dedicated to him, because he was a big Elvis song. The house in white & gold on Brownstone St. (with the "Gaga's House" sign is a tribute to Jennings' mother. The last house on Brownstone St. is red for the Osborne house. Jennings Osborne was tremendous philanthropist, well-known for his charity work in Little Rock, Arkansas. The white angel among the blue angels is a metaphor for Osborne joining his angels in the display.

The movement of the lights from Residential Street to Streets of America was a great test. During their one-week hiatus, the Studios were missing something. A test was done in late January after that season with just the side of the Chevy building done. When they turned it on, John's thought was "this could really work." While he has a warm feeling for Residential Street, the "canyon of lights" on Streets of America is a great effect, and lets people feel like they're part of the lights.

John closed with a great story from first night they threw switch in 1995, which does a great job of summing up the attraction of the display.

Thanks to our announcer, Andrew Rich, and to Mike, who has returned to his role as our sound editor and audio engineer!