Disney Cruise Line going to Miami, returning to Europe in 2013 | The Magic, The Memories, and You gets a "romance" makeover | Disney Dreamers Academy class of 2012 announced | Construction update | Quick takes | Crowd update

Disney Cruise Line going to Miami, returning to Europe in 2013

Just hours after we published last week that the Disney Cruise Line announcement of its 2013 destinations for the Disney Magic and Disney Wonder had been postponed with no word on when the information would be released, DCL announced that, as expected, the Wonder would come back east and sail from Port Miami until it was time to go back to Alaska in the spring, and the Magic would return to Europe for the summer of 2013.

There are no official announcements for what the ship are scheduled to do after that, but it seems likely that it likely sails from Vancouver back to Los Angeles on September 9, and then returns through the Panama Canal to Miami.

The Magic, currently based out of Port Canaveral, moves to New York City in May after the first few voyages of the Disney Fantasy. It remains there until September, when it moves to Galveston, Texas, where it is scheduled to remain through May 2013, sailing alternating 6- and 8-night Western Caribbean itineraries (starting at $750 per person for six-night cruises and $920 for eight-night cruises). It departs Galveston on May 18, 2013, for a 14-night Transatlantic repositioning voyage to Barcelona, Spain, with stops at Castaway Cay, Funchal (Madeira), Portugal, and Gibraltar, U.K.

Once in Barcelona, the Magic begins a varied set of itineraries. Unlike its previous visits, the Magic really mixes it up this time, with 4-, 7- and 12-night itineraries during its three months there. The four-night cruises (starting at $796 per person) depart on July 9 and August 6, and include stops at Nice (Villefranche), France and Palma de Mallorca, Spain. Seven night voyages (starting at $1,015 per person) visit Nice (Villefranche), France; Florence (La Spezia), Italy; Rome (Civitavecchia), Italy; and Naples, Italy, and depart on June 1, 8, August 10, 17, 24, and 31.

As with the Wonder, there has been no official announcement regarding the Magic after it is done in Europe, but it is likely to depart Barcelona on September 7 for a 14-night Westbound Trans-Atlantic repositioning voyage back to Galveston.

Adventures by Disney is working with Disney Cruise Line to offer three- and four-night pre-cruise itineraries in Barcelona and Madrid, as well as special itineraries at ports during the voyage.

Meanwhile, the Disney Dream and Disney Fantasy continue their previously announced itineraries of 3- and 4-night (Dream) or 7-night (Fantasy) voyages from Port Canaveral through 2013.

Reservations are available for all cruises now, and Adventures by Disney itineraries and pricing will be available in March.

For more information or to book a cruise, you can call Disney Cruise Line at 888-325-2500, visit the DCL website or contact your travel agent. MousePlanet's preferred Disney travel providers are Small World Vacations, Mouse Ear Vacations, and Get Away Today Vacations.

The Magic, The Memories, and You gets a "romance" makeover

As we mentioned back in November and in an interview on Episode 437 of the MouseStation Podcast, "The Magic, The Memories and You" castle projection show is getting a "romance" overlay in time for Valentine's Day. The new show debuts this Thursday, February 1, and run through Sunday, April 15. 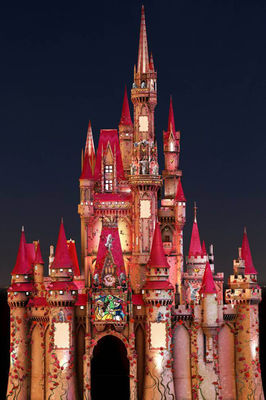 The "romance" overlay for The Magic, the Memories, and You includes red roses blooming all over Cinderella Castle with "stained glass" images above the castle entrance. Image © Disney.

As demonstrated for the holiday season—which added gingerbread, presents, and snowy themes—the show is capable of infinite customization by swapping in and out segments of themed images. For the spring, the show is incorporating roses, a starry sky, and stained glass window images. The "stained glass" images depict Cinderella and Snow White with their princes, and the final image of Beauty and the Beast, featuring Belle and her transformed prince. 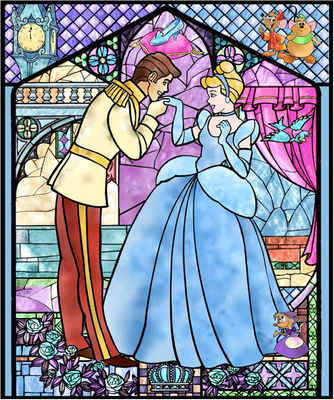 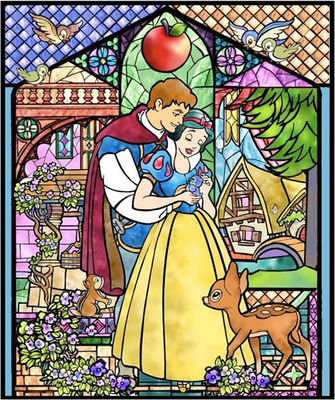 Snow White and her prince are shown on a second "stained glass" panel. Image © Disney. 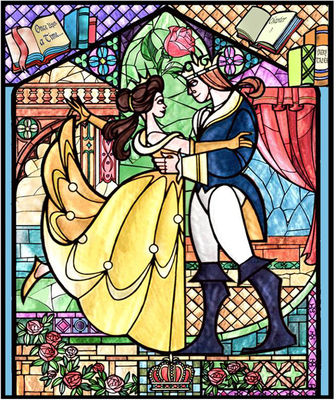 A third "stained glass" image recalls the final image from "Beauty and the Beast." Image © Disney.

What is sure to be a crowd pleaser is what many call the most magical moment of the movie Tangled: the release of a lantern by the king and queen, joined by hundreds of lanterns by the citizens of the kingdom.

As also mentioned in November is the debut of a summer-themed overlay later this year, featuring Disney Channel stars among other images. Sure to be a big hit in that show is when Cinderella Castle transforms into… a sand castle. 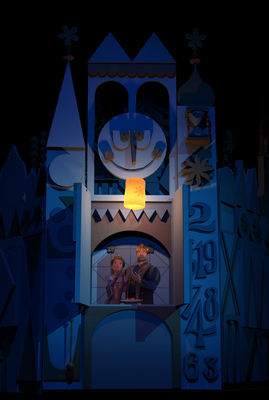 A sure-to-be-striking image (here shown on Disneyland's "it's a small world" facade) is the king and queen from "Tangled" releasing their floating lantern, followed by hundreds of other lanterns. Image © Disney.

The members of the fifth class of the Disney Dreamers Academy program were announced last week. Students represent 21 of the 50 states, plus Washington, DC. The largest contingent by far comes from Georgia, which is sending 19 high school students to the event. The next largest groups come from Maryland (11) and Texas (10). Individual cities with the most students this year are Atlanta and Detroit, with four each, followed by Baltimore; Bowie, MD; Charlotte, NC; and Houston, with three each.

…We're hearing that the game portals are getting very crowded and backed up for Sorcerers of the Magic Kingdom. If things are backed up this badly during testing, Disney will have a lot of work to clean things up before releasing it on a regular basis.

…The change to the Disney Look becomes official later this week, so you may start seeing cast members with beards starting very soon. Let us know what you think in the comments below.

…We've recently heard a rumor that the Kim Possible Adventure at Epcot may eventually be turned into an Agent P Secret Mission, themed to the alter ego of Perry the Platypus from Phineas and Ferb. If that proves to be true, it shows the benefit of software-driven activities, where the entire show can be swapped out with a software update. Of course, as with all rumors, this should be taken with a grain of salt.

…Our friends over at TouringPlans.com report that The Seas with Nemo and Friends at Epcot is getting Fastpass access while Test Track is closed for its big update this summer.

…Registration for the May 5 the Expedition Everest Challenge is now open.

…Registration for the Twilight Zone Tower of Terror 10-Miler opens in just over two weeks, on February 14.

In connection with the "One More Disney Day" promotion for leap day, Disney has released a "One More Disney Day and Night – Free" discount for stays from February 26 through March 10. If you book a non-discounted Magic Your Way package of at least three nights with an arrival date most nights February 26 through March 10, you receive an additional night for free. the offer can only be applied once per package or reservation, and excludes suites.

You must book this discount by January 31. The rooms available at these rates are limited, and no other group rates or discounts apply.

You can make your reservation through the Walt Disney World website or by calling (407) 939-1920 or your favorite travel agent and mentioning discount code J6R. MousePlanet’s preferred Disney travel providers are MouseEarVacations.com (link), Small World Vacations (link) and Get Away Today (link).

Florida residents can take advantage of a special 3- or 4- day ticket at discounted prices through late May. The "Wild for 3" (and "Wild for 4") tickets are available for purchase through May 21, and are valid for admission any three (or four) days through May 24, excluding blackout dates. The tickets are not valid February 18-20 and April 1-13 due to high crowd levels.

The Wild for 3 Pass ($99 plus tax) and Wild for 4 ($129 plus tax) passes are good at any one of the four Walt Disney World theme parks each day, but without park hopping privileges. Park Hopper and Water Park Fun & More options can be added for $27.50 each ($55 for both).

Proof of Florida residency is required for each adult age 18 and older. The discounted price applies to both adults and children.

Disney has released a Passholder discount for most nights from through March 8. Discounts are 35 percent for select Moderate, Deluxe, and Deluxe Villa accommodations, and 30 percent for Value resorts from Sunday through Thursday nights.

As with most Passholder discounts, you can book this discount up through your arrival date, if discounted rooms are not yet sold out by then. The rooms available at these rates is limited. Minimum length-of-stay requirements may apply for Friday or Saturday arrivals. No group rates or other discounts apply. Suites and 3-bedroom Grand Villas are not included.

You can make your reservation through the Passholder website or by calling (407) 939-7731 or your favorite travel agent and mentioning discount code H5L. MousePlanet’s preferred Disney travel providers are MouseEarVacations.com (link), Small World Vacations (link) and Get Away Today (link).

Room-only discounts for February through June

Disney has released a room-only discount for all nights from April 13 through June 14. Discounts vary based on date. However, many resorts are excluded from the discount, including All-Star Movies Resort, Port Orleans French Quarter Resort, Contemporary Resort, Beach Club Villas, Wilderness Lodge Villas, and premium views at Animal Kingdom Lodge.

For stays on the nights of May 25 to 27, guests receive discount rates of:

You must book this discount by February 28. The rooms available at these rates is limited. Minimum length-of-stay requirements may apply for Friday or Saturday arrivals.

You can make your reservation through the Walt Disney World website or by calling (407) 939-1917 or your favorite travel agent and mentioning discount code N6P. MousePlanet’s preferred Disney travel providers are MouseEarVacations.com (link), Small World Vacations (link) and Get Away Today (link).

From now through September 28, 2012, active and retired U.S. military personnel can purchase 4-Day Military Promotional Tickets with either the Park Hopper or Water Parks Fun and More option for $138 per ticket, plus tax, or with both the Park Hopper and Water Parks Fun and More options for $165 per ticket, plus tax. No Base ticket is available with this offer.

Eligible service members include active or retired members of the U.S. military including the U.S. Coast Guard, National Guard, and Reservists. Disney Military Promotional Tickets can be purchased at Shades of Green or at a participating military base (MWR/ITT) office. There is no tax charged for these tickets but they must be activated at a theme park ticket window. Tickets may also be purchased at Walt Disney World Park Ticket Offices and Guest Relations Offices where tax will be charged. No more than twelve Disney 4-Day Military Promotional Tickets may be purchased, activated and/or used by any Eligible Service Member or spouse during the life of this promotion, and no Eligible Service Member or spouse may purchase, activate and/or use more than six Disney 4-Day Military Promotional Tickets during any single week of the promotion. One of the Disney 4-Day Military Promotional Tickets purchased on each occasion must be for use by the Eligible Service Member or spouse. This offer is for active or retired members of the U.S. military, including the National Guard, Reservists and the U.S. Coast Guard. Valid military identification is required. The tickets are non-transferable and may not be resold.