Soarin' Around the World opens June 17 | Dapper Day and Bats Day at Disneyland this weekend | Alice preview, and the Sunset Showcase Theater | This and that... | Crowd Forecast

Soarin' Around the World opens June 17

During a press event at Walt Disney World last week, Disney confirmed that Soarin' Around the World is debuting at both Disney California Adventure and Epcot park on Friday, June 17. Soarin' Around the World is an update/replacement for the Soarin' Over California attraction at DCA, and the Soarin' attraction at Epcot. The new film visits a dozen locations around the world. No word on whether it features Patrick Warburton in the new pre-flight video.

Dapper Day and Bats Day at Disneyland this weekend

The unofficial spring Dapper Days at the Parks is scheduled to take place this Sunday, May 1. This popular event grows larger each year, so it's worth making note of the date if you plan to visit the park during this weekend, perhaps to enjoy last call at the 2016 Food & Wine Festival.

While the Disneyland park outing is scheduled for Sunday, there are Dapper Day happenings Friday, Saturday, and Sunday that will result in noticeable crowds.

The event kicks off Friday night with a launch party at the Jazz Kitchen in Downtown Disney. Tickets are $20 in advance ($25 at the door), and Dapper attire is required.

On Saturday, the Dapper Day Expo opens at the Disneyland Hotel. Admission is free starting at noon, though you can purchase a ticket for early bird entry starting at 10:00 a.m. Early bird entry also includes continental breakfast and a limited edition Dapper Day pin designed by popular artist Jarrod Maruyama.

During the expo, visitors can enjoy live entertainment from groups like Grammy Awards-nominated California Feetwarmers, and The Bobbysox Brigade/Atomic Garage. There will be several photo opportunities at the expo, including a vintage car from the Petersen Automotive Museum. The expo closes at 7:00 p.m. on Saturday.

The Dapper Day Expo continues on Sunday from 10:00 a.m. to 7:00 p.m.. This is the designated Disneyland park outing day, although there are no officially organized meet-ups or group photos. Just expect to see thousands of visitors in the park dressed in their Dapper fineries. More information is available at the event website.

Due to an unexpected scheduling coincidence, this weekend is also the unofficial Bats Day at the Fun Park. The 18th annual event will be the first held at Disneyland since the domestic parks implemented a new dress code, which prohibits guests over the age of 14 from wearing anything that can be mistaken for a costume.

This group has several scheduled meets, and three group photo opportunities. From the event website:

An extended preview of Alice Through the Looking Glass begins Friday, May 6 at Disney California Adventure. Unlike past several such previews that were hosted in the Bug's Land Theater and which forced temporary closures of the "it's tough to be a bug" attraction, this preview is being hosted in the Sunset Showcase Theater in Disney California Adventure. 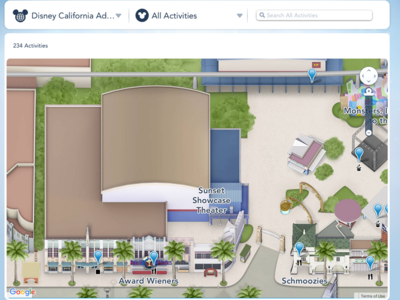 The former Muppet*Vision Theater has been renamed the Sunset Showcase Theater.

If that name doesn't ring a bell or if you're wondering if you're reading the wrong resort update, that's because the Sunset Showcase Theater is Disney's brand-new name for the former Muppet*Vision 3D theater. As we've reported, that Muppet movie attraction, which closed to make room for the Frozen sing-along show, has been removed from the Disneyland web site. Now that the Frozen show has closed in advance of the debut of the new stage production at the Hyperion Theater, Disney has renamed the Muppet's former home. Bicoastal Disney fans have every reason to be confused, as there is also a Sunset Showcase Theater at Disney's Hollywood Studios in Florida.

The name change is a good sign that the Muppets won't return to Disney California Adventure in the near future, if at all.

Alice Through the Looking Glass opens May 27.

...Effective immediately, Disney has reduced the purchase limit on open-edition items from 25 of the same item, to 10 of the same item. The current policy of two per limited-edition item remains in effect. This change affects all Disney-owned retail outlets, including Disneyland, Walt Disney World, Disney Store, DisneyStore.com, Disney Cruise Line, and Aulani.

...We've updated the Merchandise Events section below through May 2016. The biggest event of the next month is a rare appearance by popular artist SHAG on May 21. SHAG will release a new collection of Star Wars-inspired merchandise, including a print, housewares, and accessories created in conjunction with Harveys Seatbeltbags. 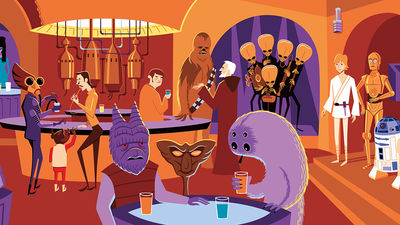 Artist SHAG will release a collection of merchandise based on this Star Wars-inspired image on May 21. Photo © Disney.

...The Disneyland Autopia is scheduled to reopen this Friday, April 29 following an extensive refurbishment and change in title sponsor.

...The Paradise Garden Grill restaurant in Disney California Adventure closed last week without notice, and Disney says there is no official reopening date for the location. We have reached out to Disney to learn more about the closure, and any possible replacement.