Autopia reopens with a new look and new sponsor | Celebrating Star Wars Day at Disneyland | Constructionland | This and that... | Crowd Forecast

Autopia reopens with a new look and new sponsor 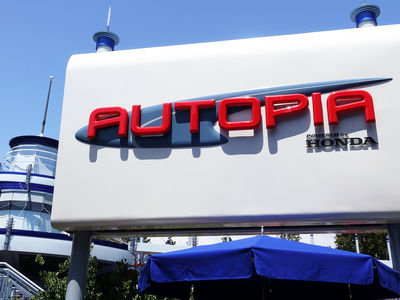 "Autopia has brought joy to generations of families and has created lasting memories for millions of Disneyland guests," said Takuji Yamada, president & CEO of American Honda Motor Co., Inc. "Honda is proud to sponsor this iconic attraction and continue our alliance with Disneyland Resort."

The attraction queue and small "preshow" building were repainted during the refurbishment, and new signs with the Honda logo are at the ride entrance, as well as on the bridge at the exit. The nearby Winner's Circle store now also bears a Honda sponsorship sign. 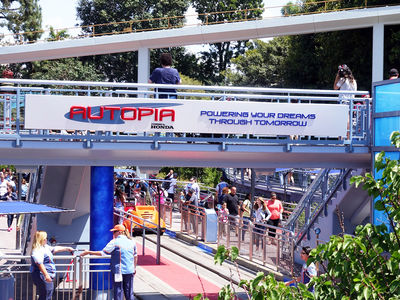 The exit bridge has a new sign with the new Autopia logo. Photo by Adrienne Vincent-Phoenix.

Both the large display screen visible from the queue and the small screens in the preshow area show videos featuring futuristic transportation videos. They reminded me a bit of the videos that played in the Rocket Rods queue.

Some fans hoped that the end of Chevron's sponsorship of the ride would open the way for Disney to convert the attraction to electric-powered or even hybrid vehicles, but nothing has changed under the hood. 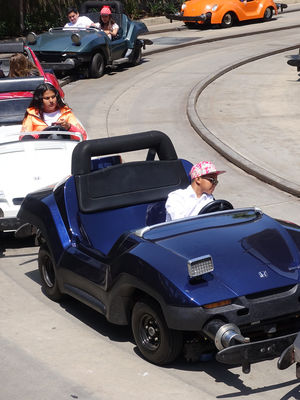 Some of the ride vehicles were repainted and bear Honda hood badges. Photo by Adrienne Vincent-Phoenix.

The hood itself is another story, with many of the cars repainted to match Honda automotive colors and fitted with Honda badges. Other cars seem to be untouched on the inside or out—the car I rode in on Saturday was not one of those sporting the Honda logo, and did not appear to have had any cosmetic work done during the refurbishment. 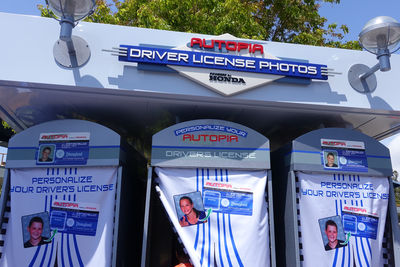 Drivers can personalize their new Autopia driver's license with a photo from one of three kiosks at the ride's exit. Photo by Adrienne Vincent-Phoenix.

The car wash billboard on the course has been updated to remove reference to Chevron, but the route seemed otherwise unchanged.

During opening weekend, cast members distributed an updated version of the paper Autopia driver's licenses. There are three photo booths at the exit where riders can take a picture to add to the license. Photos are $5, which is pricey for a single photo, but comparatively inexpensive for a Disneyland souvenir. 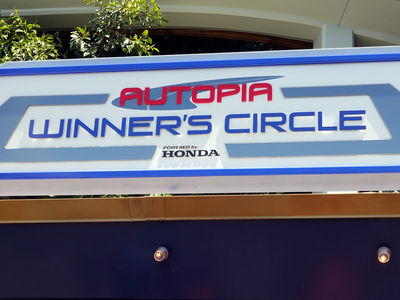 The Winner's Circle store also features the Honda logo as part of the ride's sponsor change. Photo by Adrienne Vincent-Phoenix. 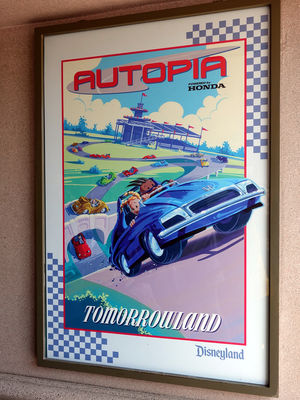 The ride did not offer Fastpass this weekend, and the Disneyland website no longer lists this as a Fastpass attraction.

"May the Fourth be With You" this Wednesday, when Disneyland marks Star Wars Day with a small line-up of events. Already home to the Star Wars Launch Bay, Tomorrowland is the natural focal point for the day. The Tomorrowland Theater hosts a screening of an episode of Star Wars Rebels television show throughout the day, and commemorative merchandise and souvenirs will be offered for sale.

A "fan celebration" is scheduled to begin at 6:00 p.m. at the Galactic Grill stage (home of the Jedi Training Academy). Disney says the event will include "Star Wars trivia and other special surprises will take place throughout the evening." 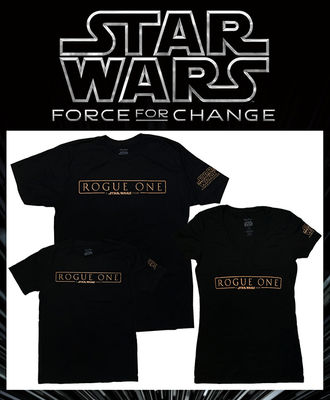 The new Force for Change collection featuring the Rogue One logo will be sold starting Wednesday at Disneyland. Photo © Disney.

Wednesday also marks the launch of the next Force for Change clothing collection, featuring a logo from the upcoming film in the Star Wars universe, Rogue One. The shirts will be released at the Star Trader and Star Wars Launch Bay shops inside Disneyland, and at D-Street and the World of Disney store in Downtown Disney. The collection will not be offered online.

Twenty-five percent of the retail sale price of merchandise in the Force for Change collection will be donated to U.S. Fund for UNICEF in support of UNICEF Kid Power.

The demolition of backstage support and shop buildings continues, clearing the way for the Star Wars Land expansion. We thought this would be a good time to compare before-and-after photos, so you can see just how much has changed over the past several months. The Fantasyland Theater is on the left, Big Thunder Mountain is on the right, with the Matterhon in between. 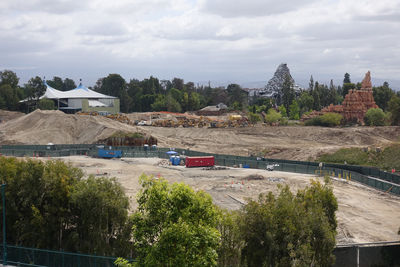 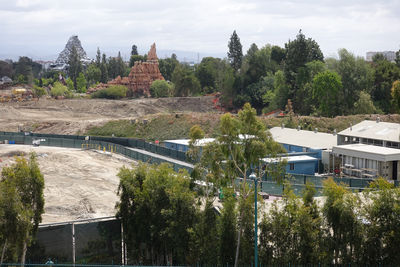 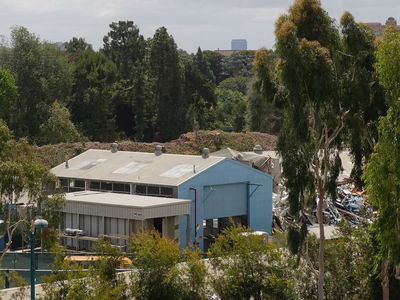 More buildings are still being demolished. Photo by Adrienne Vincent-Phoenix.

Here's what that same area looked like back on March 13, and on April 1. Unfortunately, it looks like the burning settler's cabin has since been demolished. 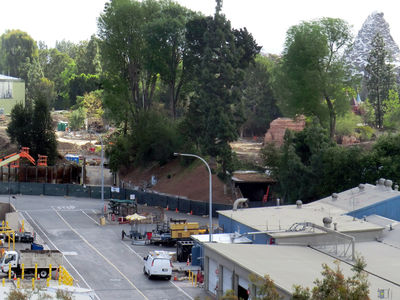 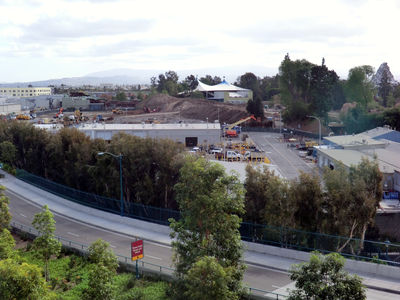 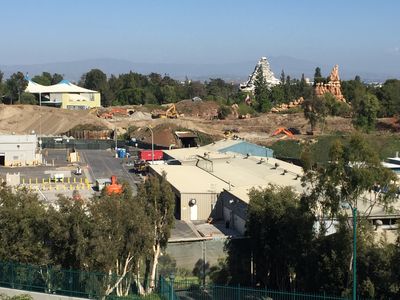 The view towards Toontown isn't that different, but you can see how much space was freed by the demolition of the former transportation building. 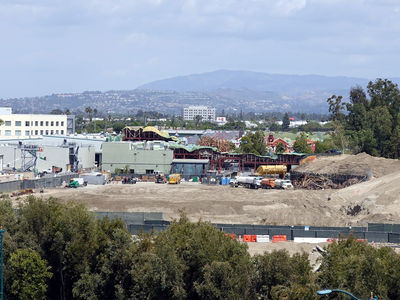 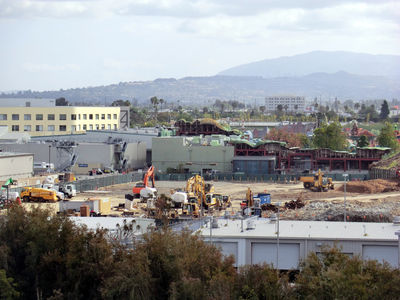 ...The green elephant that once graced the seating area of the Gibson Girl Ice Cream Parlor has a new home in Adventureland. "Penny" the elephant was removed from Main Street during removation in 2012, and hadn't been on display since. This week, however, the green resin pachyderm was spotted in a new location, above the Tropical Imports store outside the Jungle Cruise. That ride is expected to reopen this week. Other than new red eyes, Penny looks much the same as she did when we last saw her on Main Street. 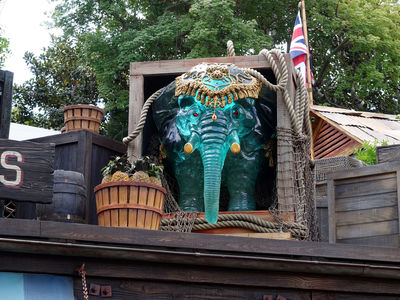 Penny the Pachyderm has a new home in Adventureland. Photo by Adrienne Vincent-Phoenix. 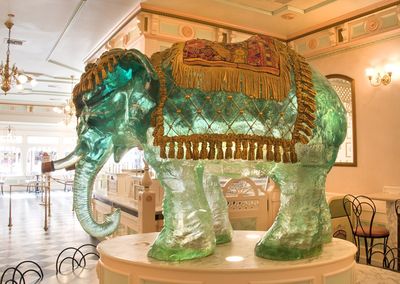 Penny previously stood at the center of the seating area of the Gibson Girl Ice Cream Parlor. Photo © Disney.