Well, the discussion has finally begun. It seems like a summer trip to Walt Disney World is in the works for us. The middle of May might seem like a little late to pull off a trip in July or August, but this is how we typically plan and it always works out just fine. A few weeks ago, we got one of those magic pin codes in the mail offering us a 30% discount on a room-only reservation and, honestly, isn't that just too hard to pass up? It's back to the Yacht Club for us I suspect and, as you can imagine, I'm beside myself excited! It's only been a year and already there's a list of new things to see like Pandora, new fireworks in the Magic Kingdom, Rivers of Light, and Muppets in Liberty Square I'm ready. We're all ready. It's time to go back.

Anticipating a trip to Walt Disney World always makes me even happier to write about the place than I usually am. This series that I've been working on for the last month or so, touring around the Magic Kingdom and talking about the best that each magical land has to offer, just makes me want the summer to get here even quicker. We started off on Main Street then went clockwise through Adventureland, Frontierland, and last time I waxed poetically about Liberty Square. That means it must be time for Fantasyland.

Fantasyland is the place where dreams come true for little kids. It's the place where you can fly with Peter Pan, go under the sea with Ariel and journey through the Hundred Acre Wood with Winnie the Pooh and his friends. When my daughter was four and we first visited the Magic Kingdom with her, Fantasyland is the first place we went. When my twin boys turned four and we brought them for their maiden voyage, Fantasyland was the first stop as well. It's the perfect jumping off point, where you can leave the real world behind and begin your Disney adventure.

All these years later, at 18 and 14, I'm quite sure it's the place that instantly makes my daughter and sons feel like little kids again. I know this 48-year-old writer feels like a little boy as soon as he passes through the castle archways into Fantasyland. Its that kind of place. So, what do I consider to be the best things in this most magical of Magic Kingdom lands? Let's count them down with my Top 5 things to see in Fantasyland. This was a tough one.

Yes, a rest area has made my list. One could say that it's just a restroom spot. One could say that, but they would be oh so wrong. The thing that I always love about Disney is their proclivity for doing things that they simply don't have to do in order to completely build out an area and fill it full of incredible details. When I heard they were demolishing the old Skyway building and stroller parking to build a Tangled themed rest area, I wasn't sure what to expect. 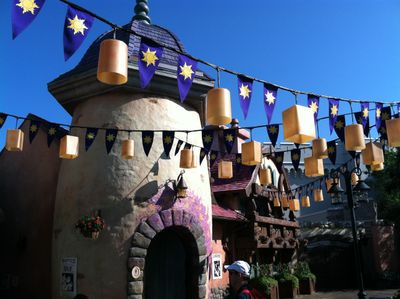 When I first saw it in person, it quickly became one of my favorite spots in the whole park. What an amazing job the Imagineers did in this corner of Fantasyland. The lanterns, the frying pans, the wanted posters, Rapunzel's paints and brushes, the tower, the waterfall, the flowers, the bag of apples… I could go on and on. I'm a huge fan of the movie and this is an amazing tribute to the film that doubles as a bathroom stop and phone charging area. It's simply brilliant. Stop and look around. The details are endless.

4 – Be Our Guest Restaurant 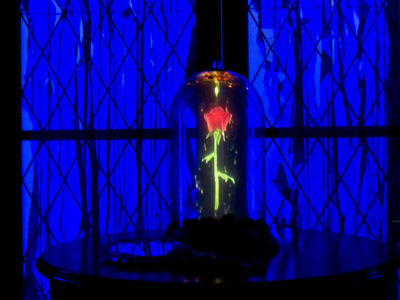 The enchanted rose in the West Wing at Be Our Guest. Magic Kingdom. Photo by Alan S. Dalinka.

Admittedly, we still haven't been able to get into dinner at Be Our Guest yet. Last trip, however, we snagged a lunch reservation and I'm so glad we did. Walking over the bridge into the Beast's castle feels like you're entering a mini land all its own. The landscaping and waterfalls next to the bridge complete the picture.

Once you walk inside, the details are pretty impressive. Enjoy the talking armor in the first room while you peruse the menus. If you're in the Ballroom, enjoy the "snow" falling outside. Take a break from your meal in the Rose Gallery and wander around to admire the beautiful tapestries. It's all done so well. But if you're a fan of the classic film, and I know I certainly am, it's The West Wing that's the real winner here. If I didn't think I was interrupting fellow patrons' meals, I could spend quite some time staring at the glass bell jar that encases the enchanted rose dropping its petals.

On your way out, don't forget to look for the amazing stained glass window that mimics the one famously depicted in the film. Be Our guest was a much needed addition to Fantasyland as far as dining options go. Once again, though, Disney didn't just build a restaurant. They constructed yet another incredible experience for their guests to behold.

3 – The Many Adventures of Winnie the Pooh

As I said above, Fantasyland was where my kids got their start in Walt Disney World and for all three of them, the first attraction had to be Winnie the Pooh. So, it's no surprise that this makes my list. And why shouldn't it? I don't really feel like I've made it to Disney until I ride through the Hundred Acre Wood in that hunny pot. My favorite room is the "rain, rain, rain came down, down, down" room. 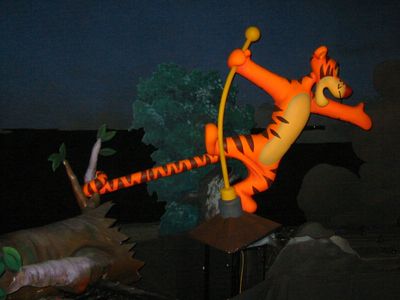 Tigger holds on in the rain room. Photo by Chris Barry.

It never fails to make me smile. It's a simple pleasure for sure, but at its heart Disney has always been more about the simple pleasures of life. This ride will always remind of the wide-eyed, overcome-with-magic look on my young kids' faces. To this day, there's always a brief moment on The Many Adventures of Winnie the Pooh where I catch a little glimpse of that look in their teenage eyes. It's priceless and it keeps us all coming back.

There's no better 4-D film in any park anywhere. But is that what makes this attraction so special? Decidedly not I would say. Sure the effects are cool, but it's the warm feeling and the nostalgia that PhilharMagic brings to the surface that make it one of my favorite things to do in all of Walt Disney World. 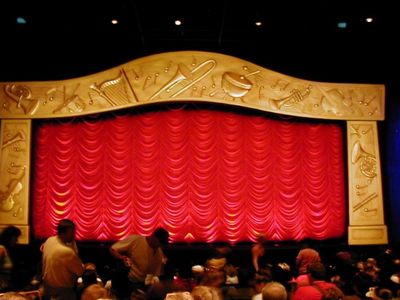 The classic animated film tour that Donald Duck goes through in Mickey's PhilharMagic will always warm my heart. Take your pick. Each of the films that Donald visits, Beauty and the Beast, Fantasia, The Little Mermaid, The Lion King, Aladdin and most importantly for this old softie, Peter Pan are all sentimental favorites of mine. My favorite moment is the appearance of Tinker Bell and Peter Pan as they fly over London to the tune of "You Can Fly." Gets me every time. I also will never get tired of watching little kids reach out for the 3-D jewels and other items that magically appear before them. They're totally amazed and it's just a wonderful thing to see.

Peter Pan is my all-time favorite Disney film. If you think Peter and Tink get to me in PhilharMagic, you can imagine how actually climbing into a pirate ship, flying through into the Darling's nursery and then taking off to go to Neverland makes me feel. Peter Pan's Flight is it for me. 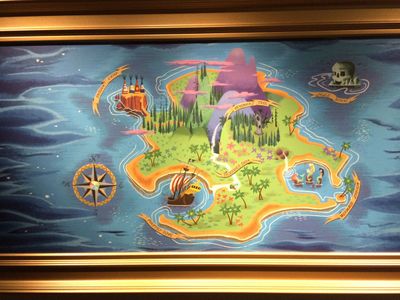 The interactive queue in the standby line of Peter Pan's Flight features a gallery of images like this map of Neverland. Photo by J. Jeff Kober.

This is the moment that I revert to a child. As soon as I approach the ride and I hear the music playing, I'm transfixed. The new queue is such a wonderful addition to this classic attraction. It completes the package. I know Peter Pan's Flight is one of the simplest attractions in Walt Disney World, but that doesn't matter. As far as I'm concerned, it's a never miss for me. I wish I could fly over the streets of London like Peter and the kids do. I wish I could never grow up like Peter. Let's face it, I'm wearing a Mickey Mouse T-shirt and Mickey Mouse watch right now as I write about Fantasyland so, essentially, I never have grown up—not completely at least. I have no problem with that and that's why Peter Pan's Flight takes the top spot on my list.

This was one of the tougher lists I've written. Narrowing things down to five was tough. I'm a huge fan of "it's a small world" and Seven Dwarfs Mine Train. I love the Sir Mickey's shop, especially the figures climbing on the vines in the windows. I left off everything in Storybook Circus, which technically is in Fantasyland. I love the carousel. I love eating on the second floor of Pinocchio's. They did an amazing job with Ariel and Under the Sea, especially the queue area.

Should i have skipped all of these great things? Should I have skipped the truly dazzling Cinderella mosaic inside the castle? It was a tough call for sure. There's so much to do and look at throughout all of Fantasyland, it's more worthy of a Top 10 than just a Top 5. As always, I have to whittle things down to the things that affect me the most. These are the things in Fantasyland that give me that extra special magical feeling that I go to Walt Disney World for in the first place. I do believe that Fantasyland is the heart of the Magic Kingdom and therefore it may very well be the heart of all of Walt Disney World.

Fantasyland, above anyplace else in Walt Disney World, is all about the magic. It's all about being a kid or, for that matter, being a kid again. But don't just take my word for it. It's perfectly summed up in the dedication of Disneyland's Fantasyland from 1955, so I'll let those words do the talking:

"Fantasyland - The Happiest Kingdom of them All. Here is the world of imagination, hopes, and dreams. In this timeless land of enchantment, the age of chivalry, magic and make-believe are reborn—and fairy tales come true. Fantasyland is dedicated to the young and the young-at-heart—to those who believe that when you wish upon a star, your dreams do come true."

Thanks for visiting Fantasyland with me. As always, I'd like to hear your thoughts. Click on the link below and let me hear what your Fantasyland list would be and I'll see you next time as we blast off for Tomorrowland.