What a big, big Disney year not only in the parks but in the cinemas and on our small screens. Thanks so much Adrienne Vincent-Phoenix for letting me represent MousePlanet on Instagram, in the parks and critiquing Marvel, Disney, and Pixar films. Hope you have enjoyed our coverage for 2019 and looking ahead for another busy year in 2020. Entertainment at the parks has had a lot of changes this year and we are looking forward to seeing what new things will be happening at Disneyland and Disney California Adventure. I may even throw in a prediction or a wish or two... after all, it is the holiday season! 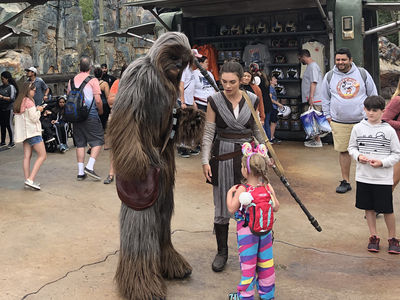 Chewbacca and Rey recruit new members for the resisitance. Photo by Todd Pickering.

Did you hear? Galaxy's Edge opened in Disneyland (and Disney's Hollywood Studios in Walt Disney World) this year. This concept is very unique as you are visiting another planet and all of the cast members are denizens on this planet. Some have been off world and from the ones we spoke with the great majority have not left the planet Batuu. This new land opened with only one of the attractions ready to go so for all intents and purposes this was a soft opening yet Disney did not brand it as such. This has led many, many people to speculate on the failure/success of this new endeavor which we feel is a bit too early to make a final judgement. Star Wars: Rise of the Resistance, the anchor attraction of this land opened in December, 2019 in Florida and will open January 17th in California. As for entertainment you may meet Rey, Chewbacca, Vi Moradi, Storm Troopers and Kylo Ren. Kylo Ren makes an appearance in a mini-show coming out of his ship and being introduced by one of his officers of the New Order. He is not happy with their performance on Batuu and heads into the land to interrogate guests personally. Kylo Ren usually appears around 1pm at his ship. If this is something you want to experience it is best to ask cast members if they have any intel as you will not find this listed in the Entertainment Guide or even on the Disney Web Page. Unlike other characters throughout the park the current concept once again is that these folks live on Batuu. They interact, especially with the youngsters dressed up in full Star Wars outfits. It is like a dream come true for these kids and it is very entertaining to experience. To read about a morning with Rey and Chewbacca from this year just click here. It will be interesting to see how this continues in 2020 with the third and final film having been released and the new attraction opening up. Will there be another Jedi-type training show that was taken out of Tomorrowland? Will there be more characters out and about with the land completely opened? Only time will tell. Needless to say we will keep you posted as we experience this throughout 2020 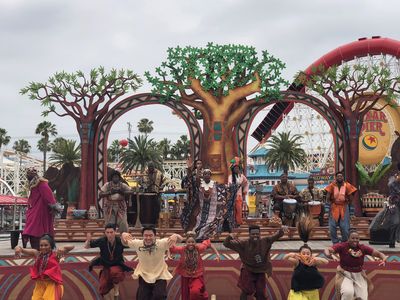 The Tale of the Lion King was a wonderful summer offering. Photo by Todd Pickering.

Summer of 2019 brought us a really clever and original version of one of Disney's favorite properties The Lion King coinciding with the release of the live action version. We were invited to see the film in 4D and if you want to read that critique simply click on this line. But we really enjoyed the live version; The Tale of the Lion King over at Paradise Gardens Park at Disney California Adventure this summer even more so. There was a really wonderful mash up of Simba's song "I Just Can't Wait to Be King" with Scar's "Be Prepared". There was also a wonderful dance troupe that opened with the show but were sadly eventually cut by summer's end. We were very disappointed to see them gone as Mickey and the Magical Map over at Disneyland is about the only dancing to be enjoyed at the parks currently. To see more pictures and read about our opening critique of The Tale of the Lion King click here. Will Disney do another summer show at Paradise Gardens Park? Will we see more dancing this year? Looking forward to seeing a bigger dance presence in the parks in 2020.

Out with Old and in with the New! 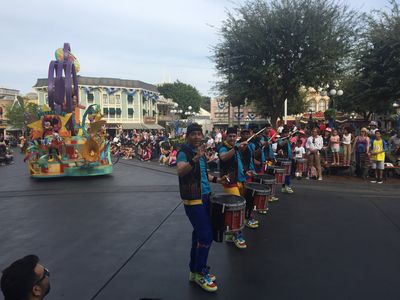 Mickey's Soundsational Parade was a big hit for many years. It had the whimsical look of a child's pop-up book and was designed by Kevin Kidney and Jody Daily. The high energy of the drum line to begin the parade along with some great choreography made for one of the most popular parades at Disneyland. This summer at the bi-annual D-23 Expo, Disney announced and released concept art for their new parade debuting on February 28th, 2020 at Disneyland called "Magic Happens". There are some mighty big shoes to fill but the concept art is gorgeous. To see more pictures and read about this new offering scroll down on The Disneyland Park Update here. 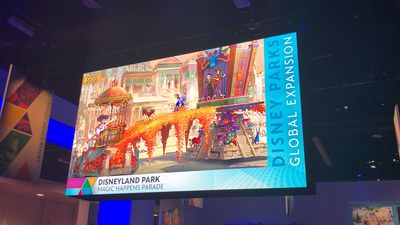 "Magic Happens" will be the new parade at Disneyland debuting on February 28th, 2020! Photo by Todd Pickering.

All Shows Must Close

Sadly, all shows must close and there were three on the chopping block in 2019 at the Disneyland Resort. The number one reason for all of these shows closing might truly be location. 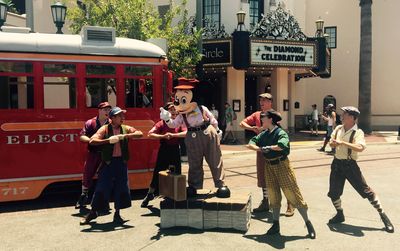 "The Red Car Trolley Boys" were a great addition to the entertainment on Buena Vista St. when it opened. "Five & Dime" also opened at the same time and they are still performing so you needn't worry that live music is completely gone. But what is missing from Disney California Adventure now is a great dance troupe. These boys (along with one girl) did a vivacious show arriving in the Red Car Trolley. When the Trolleys went down for the construction of the new Marvel-themed land, Avengers Campus, the show really lost its back drop and we were not surprised to see the Red Car Trolley Boys not on the fall schedule. There is a lot of talk about Disney cutting entertainment but keep in mind that the budget offered The Tale of the Lion King and The Festival of Holidays really has an amazing amount of entertainment. Also keep in mind that there will be quite the budget needed for the permanent Avengers Campus as we will probably see our favorite Marvel characters en masse. Will there be a show at this new land? Will the Red Car Trolley Boys come back? Will the Red Car Trolleys come back? So many questions and we will have to wait for 2020 to find out. 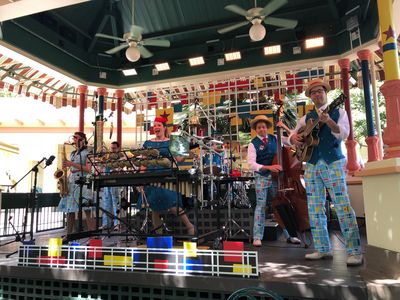 The Pixarmonic Orchestra will be missed over at Pixar Pier. Photo by Todd Pickering.

The Pixarmonic Orchestra opened up for the summer promotion of the newly imagined Pixar Pier. They covered only Pixar tunes which was a refreshing set indeed. We were happy to see that they stayed on throughout 2018 and were extended throughout the summer of 2019. Much of the press talked about budget cuts as the reason why but Disney is very careful to do audience counts and see what is the most popular. The dead-end nature of Pixar Pier made it difficult for this show to keep an audience so we were not surprised at all to see them leave. At MousePlanet we attend many shows and this one always had a hard time keeping an audience despite the amazing talent of these performers. We were truly sad to see them go away but we are not hopeful that a new show will appear back on Pixar Pier unless a promotion is linked to it. 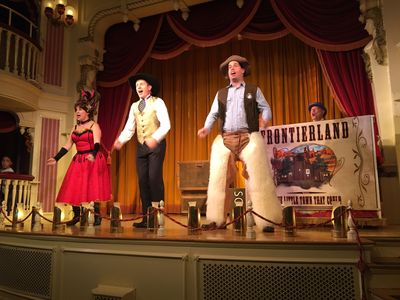 A farewell to the Laughing Stock Company that played at the Golden Horseshoe Saloon. Photo by Todd Pickering.

When Billy Hill and the Hillbillies ended a very long run at the Golden Horseshoe, the outdoor Laughing Stock Company that also performed on the Billy's two days off inside the Saloon took up permanent residency. Disney made the decision to turn the Saloon into an eating venue and the comedy show sometimes seemed to be a nuisance to diners and therefore often times a nuisance for the people that wanted to see a show, especially on a hot summer day. Once again, we were not at all surprised to see this show cut from the schedule. Seeing the Golden Horseshoe Saloon dark on the stage was very sad since Walt was very proud of this venue and the show that opened the park in 1955 ran all the way until 1986! The Piano Duel descended upon the stage late autumn in 2019 and works much better than The Laughing Stock Company. The main reason is that one of the piano players comes out and plays about 3 tunes. Then a second piano player comes out and they do all sorts of duets on two pianos. The original piano player excuses himself after hiring the second fellow. The new piano player stays and plays at least three more tunes. This makes for a much longer show and the raucous piano music is much easier to hear over the din of many people dining. The piano players are absolutely amazing and it is a much better fit in the current venue. Will this show stay on in 2020? More than the People Mover returning, we here at the Entertainment Division of MousePlanet would love to see less restaurant and a fully realized all singing and high-stepping show for 2020! Maybe our Holiday wishes will come true. 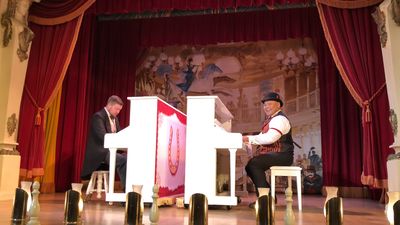 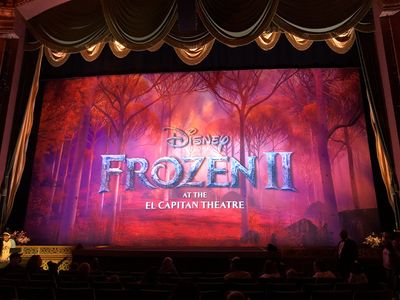 Disney had another hit on their hands with Frozen II. Photo by Todd Pickering.

At the risk of being unpopular it is time to admit that one of my least favorite films to come out of the Disney lexicon is Frozen. There is no denying that "Let it Go" is pure number one hit material but the rest of the film is a confusing jumble of ideas with a front loading of songs and one difficult number sung by trolls. This reviewer was very pleased with Frozen II and you may read my critique here. Is it too much to ask of Santa for a re-working at the Hyperion Theater and getting Frozen II on that stage? Please Santa, I have been a good boy this year. Looking forward to 2020 at the Disneyland Resort either way. Happy New Year everyone! 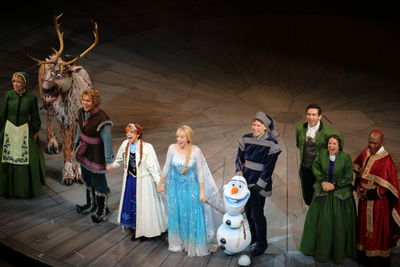 How popular is Frozen Live! at the Hyperion Theatre? Photo by Amber Knight.